While the COVID-19 pandemic accelerated e-commerce demand, the adoption of robotics depends on many factors, says Styleintelligence. 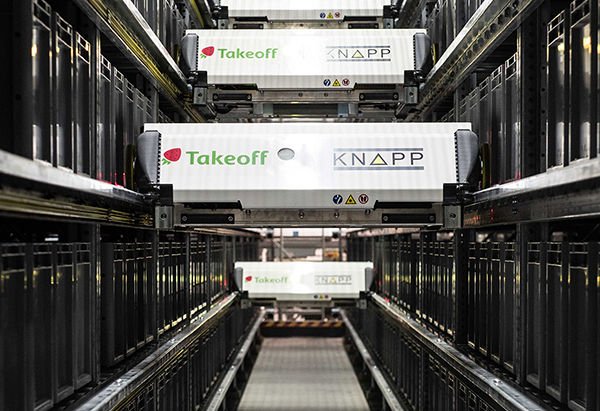 KNAPP
KNAPP has partnered with Takeoff Technologies on micro-fulfillment centers for e-grocers.
By Eugene Demaitre
·

The acceleration of e-commerce demand during the COVID-19 pandemic, particularly in groceries, has been well-documented, but the growing use of automation isn't as straightforward, finds a recent study. “E-Grocery Infrastructure 2021” from London-based STIQ Ltd. examines the growing pains around the adoption of micro-fulfillment centers, mobile robots for indoor use, and delivery drones and robots.

Legacy, brick-and-mortar retailers faced shutdowns, staffing shortages, and tightened profit margins during the pandemic, causing many to delay projects and investment in new technologies, said STIQ, which does business as Styleintelligence. At the same time, larger e-commerce players such as Ocado Group PLC and Amazon.com Inc., which had acquired Whole Foods in 2017, experienced rapid growth and sought partnerships with existing grocers.

As a matter of perspective, even if e-grocery doubled in size, it grew to only 10% of total grocery revenue, according to industry analysts. As a result, several said they expect that portion of the market to continue growing, if at a slightly slower rate than during the past year. They cited increasing consumer familiarity with online shopping for food starting in the U.K., the success of companies such as Instacart, and increasing efficiencies offered by automation.

Most of the grocers that have adopted automated storage and retrieval systems (ASRS) are more established or worked with experienced systems integrators, the study said. 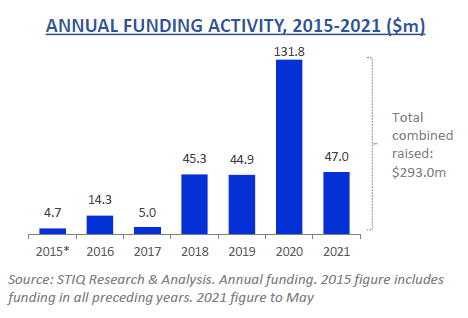 However, companies should understand that micro-fulfillment centers can require process changes.

“MFC is more or less an additional store,” said Knapp in the study. “When we build an MFC, we give it a store identifier, and we replenish not only the grocery store, but also replenishing the MFCs with its own inventory.”

“We're building a very large, fully robotized replenishment system for a U.S. grocer right now that goes live in August,” said KNAPP in the study. “That system is being deployed to not only replenish stores, but also the e-grocery network too. They realized that there are supply chain challenges, and you're not necessarily only adding new customers with e-grocery, but you’re also adding supply chain complexity. So grocers also need to find upstream productivity gains to offset the costs of e-grocery.”

“We see the U.S. changing much faster than other regions, and that is why we have decided to focus our MFC activities there,” said SSI Schaefer.

“I think that there are a select few, probably including Walmart that will go down the capex path. They have all of their own software and capabilities in-house,” said an Attabotics staffer. “But, there's a lot that goes into e-grocery. Even the large companies need a turnkey solution if they want to get to market quickly with a profitable e-grocery business with the right SKU assortment, delivery time, the right mix of fresh and local produce. It's just impractical to do it all by yourself from scratch.”

“There are a lot of different pieces to the software and robotics stack,” said the company in the report. “What drives this is that grocers are looking to gain market share, not to only cannibalize their own retail customers.” 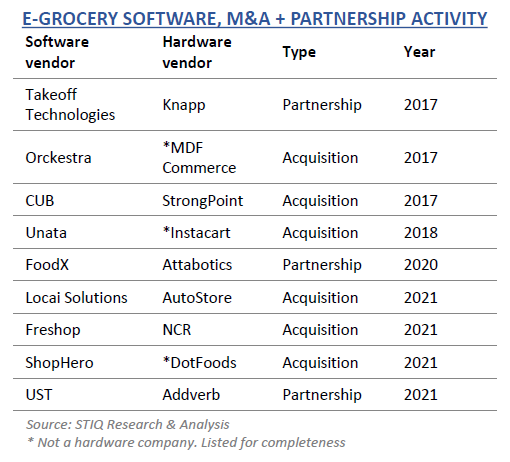 In addition, in-store automation is at different stages of maturity, according to Styleintelligence. Mobile robots for cleaning stores are more mature than inventory systems or aerial drones for deliveries. In addition, the supplier landscape includes companies solving individual problems rather than more holistic approaches. 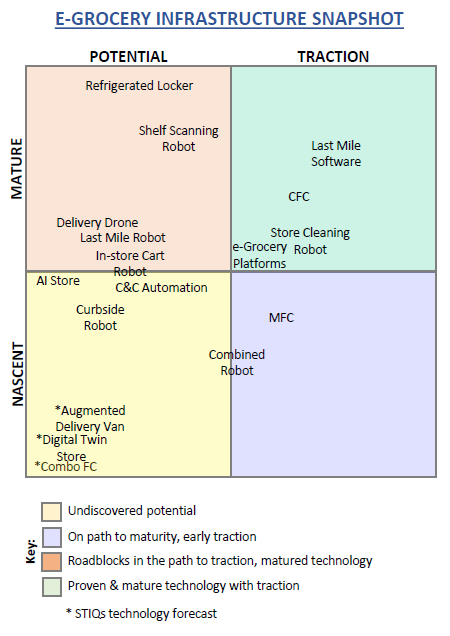 However, the nature of fulfillment will also change as robotic manipulation improves, said respondents. “There are quite specific challenges in picking groceries compared to normal item picking,” stated Fizyr. “You often have closely stacked items that can stick to each other.”

“Secondly, some of the of the materials are reflective, and it can be like looking into a mirror sometimes,” it said. “There’s also transparent wrapping over some products ... and transparent bottles of water in a sixpack, sort of combines all the challenges together. These are all possible to overcome. As much as 85% of items can be picked by robots, if not more.”

“Right now, there are human pickers with almost all of the ASRS systems moving products from one tote to another, added FoodX. “In the near future, there will be a robot picking arm ... at least for 70% to 80% of the products. You're never going to have 100% because if a robot moves a one-pound bag of flour, and if it breaks the flour, it shuts the down the whole ASRS.”

In addition, fully “lights-out” order fulfillment is still only a concept right now, observed Styleintelligence. Software platforms for e-grocery are also still relatively new, with 32 vendors, more than half (55%) of which were founded in or after 2015. Such startups are just getting started with funding, raising a total $293 million since 2015, it said.

Walmart's decision to curtail its relationship with Bossa Nova but continued use of robotics demonstrates that end-user needs should drive technology development, said the report.

From robotic trucks for materials handling in warehouses and distribution centers to autonomous mobile robots for cleaning and taking inventory in the front of house, there are plenty of tasks for automation. One area of interest is robots for loading or unloading trucks.

“One of our more significant products include the Fast Unloader, which is deployed in over 2,000 Walmart stores,” said Lozier Corp. “It's an automated system to help unload trailers and scan cartons into the system at store level so they know precisely what inventory they've received. And then it has sortation wings, so it sorts cartons into the different aisles in the store.”

Last-mile delivery robots and drones have the most startups—39—of the categories that Styleintelligence examined, but they face regulatory challenges. 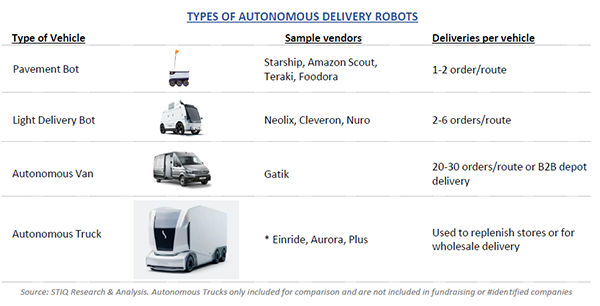 Other areas of potential robotics growth include branding, cold chains, and multifunction robots.

“Grocers may not have the space to have a dedicated robot which is a cleaning robot, and then you have another one, which is basically the visual inspection. And then you might have a third one which helps to put the goods away,” said SAP. “That idea of having a multipurpose robot, which drives through the aisles, basically cleaning at the same time to the visual inspection, can be an interesting development.”

KNAPP
KNAPP has partnered with Takeoff Technologies on micro-fulfillment centers for e-grocers.

Alert Innovation Agrees to Be Aquired by Walmart as Micro-Fulfillment Market Grows
Alert Innovation will continue operating under its existing brand name and be headquartered in Massachusetts.

Meijer Partners With Council of the Great Lakes Region to Use Robots to Clean Water and Beaches
Retailer Meijer is joining the Great Lakes Plastic Cleanup Program.
More Grocery Industry

KNAPP
KNAPP brings new technology to warehouse logistics. Working with our customers all over the world, we develop customized solutions. Uniting technological know-how with our long established experience in diverse industries is the key for our successful solutions.

SSI SCHAEFER
SSI SCHAEFER is a market leader in the field of planning and implementing static and dynamic integrated storage solutions and logistics systems.