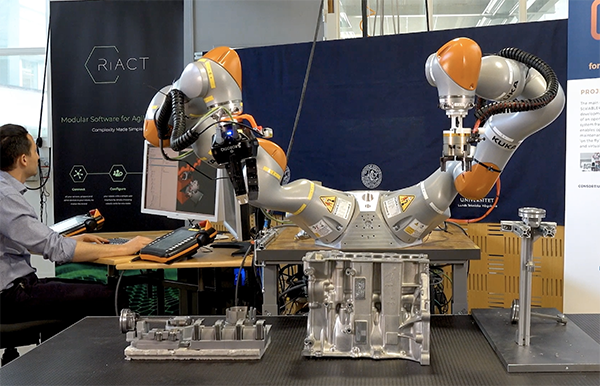 RiACT
RiACT software is designed to bring simplicity and flexibility to robot programming.
By Eugene Demaitre
·

The software stack for robots is evolving, with new tools for managing fleets, cybersecurity, and interoperability with other types of automation and enterprise systems. RiACT ApS has built a development platform that founder and CEO Bjarne Grossmann has described as “WordPress for robots” in terms of adaptability and ease of use. The company today announced that it has raised $850,000 (U.S.) in pre-seed funding.

Copenhagen, Denmark-based RiACT was founded in 2018. The company's founders had worked with major European automotive manufacturers for 10 years, recalled Magnus Philip Ritzau, co-founder and chief commercial officer of RiACT. They realized that one of the biggest problems with scaling robotics projects was a lack of software homogeneity for easily setting up applications.

“Applications were not universal, reusable, or flexible,” Ritzau told Robotics 24/7. “Most collaborative robots are still fenced and are only doing one task. We see a need for robots that can be flexible and adaptive to multiple kinds of productions over time, not just one robot that only has one program.”

Since then, RiACT has been developing a framework of templates intended to make it easier for users to set up applications, said Ritzau. Its first prototype was developed from 2013 to 2016, and its second between 2016 and 2019.

“The software has skills—basic actions like 'pick,' 'drive,' and 'place'—which are simple to drag and drop in our interface. There are behavior trees and templates for actions of all kinds like drilling and laser pointing,” he explained. “Operators can reconfigure robots in minutes without writing any code, which is especially important for SMEs [small and midsize enterprises] and companies with dynamic production lines.” 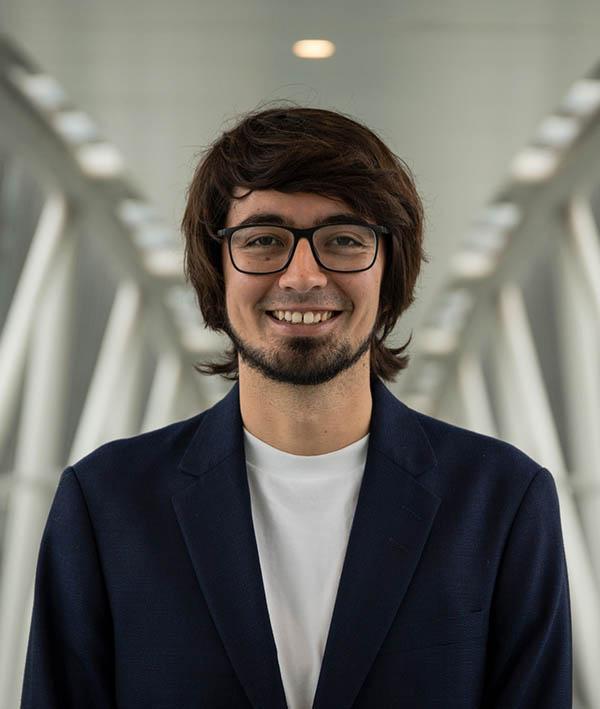 “Behavior trees are borrowed from the gaming industry,” noted Grossmann. “Robots in simulation are not that different from NPCs [non-player characters]. They have to react, using vision not just for visual inspection, but also to perceive their environment and change behavior accordingly. “

“We describe actions in a way that's understandable for almost anyone,” he said. “Each skill you build in order to create a bigger program is easily reusable in other programs or even sellable.” RiACT's technology could also address interoperability.

“Combining functionality is difficult with so many robot brands, whose capabilities differ quite a lot,” Grossmann said. “Our approach is to abstract that. We have a small translation layer in between the hardware and our operating system that allows you to use any robot the same way.”

“One of the first applications we're working on is a 'super' pick and place, taking into account multiple operations such as conditional priorities and collaboration and cooperation with humans,” he said. “If you move a fixture, traditional methods don't work. We're pushing cobots to be used as they were meant to be—as helpers in manufacturing to increase human productivity. Imagine employees taking robots like a toolbox with them to do their tasks. That's not how they're used now.”

Ritzau added: “One client told me that his dream was, if an operator could set a robot to continue their work for 30 minutes, go away and do something else— like hitting a pause button for themselves. That is possible with RiACT.” 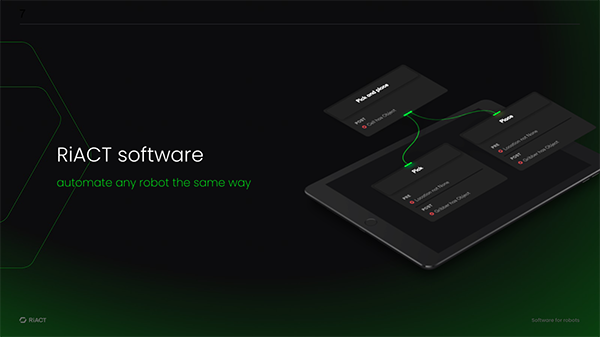 RiACT strives to generalize robotics with ready-to-use templates that can be used with any robot—in the same way.

Most collaborative robot makers already claim that their systems are flexible, so why use RiACT's systems?

“Some companies offer complex systems, but those are solutions with a lot of settings that only specialized robot experts can use and change,” responded Ritzau. “They try to manually teach cobots directly, but they often end up being too complicated or having to deal with safety regulations.”

“Other interfaces simplify, but they lose flexibility. They hide settings or parameters from users, but then the solutions are often specialized to certain applications,” he said. “Even the companies that make the most usable cobots sell software made only for their own robots. Currently, each robot brand has its own programming environment.” 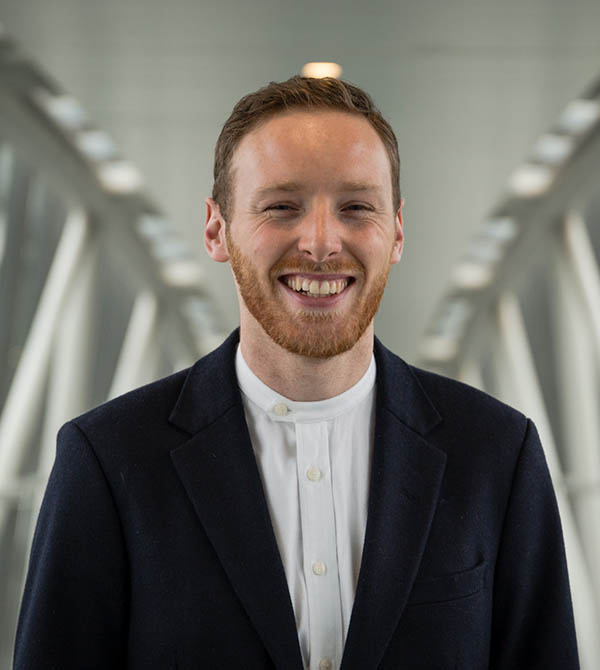 “We're working on giving robots the intrinsic agility to react in a more human-like way,” said Ritzau. “We've done a lot of research on combining that with universal actions that robots can perform as skills. We analyze industrial tasks and break them down into simple actions for robots.”

“We started with cobots because it’s a growing market, where the tooling gap has already been bridged,” he said. “A lot of companies are already working on grippers, both specialized and generalized.”

“RiACT's modular framework creates more usability for cobots,” Ritzau claimed. “If operators are more comfortable with robots and robotics interfaces, production will run more smoothly. Our software works with FANUC, UR, KUKA, and other brands. Our behavior-tree architecture, which you will not find in software from the hardware vendors, makes robots much more flexible.”

“We're not competing with the hardware vendors,” said Grossmann. “We want to become more like an app store, where different manufacturing specialists can use RiACT as the hub to do things together. RiACT is one place for all work to happen, bringing together not only the robot arm and logical programming, but also the 3D simulation and models required for seeing the whole picture.” 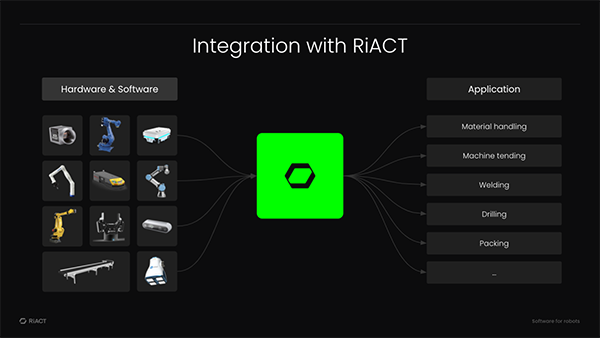 RiACT is a universal platform to connect hardware, software, and intelligent robotic applications.

“Other software companies are aiming for robot manufacturers and end users, but we believe that integrators will still be needed in the future,” said Ritzau. “We're making a development platform for integrators to deploy robots, depending on their knowledge of the end users. They can then specialize in applications such as welding and coating. Our aim is to partner with integrators worldwide.”

“End users vary a lot—some companies have their own integration teams, and others have never touched a robot,” he said. “We are bridging that gap with RiACT.”

RiACT's software is available through a subscription model for developers and a runtime license model for robotics managers, Ritzau said.

“Coordination of multiple robots is a layer we provide in the software,” Grossmann said. “It's still at an early stage, but it's where we need to extend in the future. When you look at our modular system and try to define a robot cell, such as one with a dual-arm system putting pistons into an engine block, do you have one robot or two robots?”

“We can stack agents like modular building blocks to create a grand system,” he added. “The factory of the future is one big robot, and that's reflected in the hierarchy of our software. We're looking at integrating the whole chain, up to MES [manufacturing execution systems] and ERP [enterprise resource planning] and down to multiple robots, cameras, and proximity sensors.”

“We believe there will be a move toward more standardization like with phones,” Ritzau noted. “There were once phones with multiple operating systems and chargers, but now we have Apple and Android. The same thing is going to happen with drivers in robotics. When we talk to hardware vendors, they're open to that. Universal Robots and others have open APIs [application programming interfaces], which are supported by our software.”

“We've been working with ROS 2, but a lot of big companies are reluctant to use ROS in production because it comes from an open community, and its stability is not 100% guaranteed,” said Grossmann. “That's why we offer a ROS Industrial initiative—packages with ROS to adhere to industry standards.”

Can RiACT's software enable robots to pick specific objects? “That's where integrators and third-party software come in,” replied Ritzau. “Right now, we're providing that functionality of vision locating an object, but it’s not our aim to be specialists in every skill.”

“For example, one company was manually removing knots of different sizes from wooden boards of different dimensions and types,” he said. “Not only did the cobot need to detect the knots and remove them with a drill, but it also needed to lift and polish the boards. Instead of using specialized hardware, RiACT's software can simplify and solve complex problems.”

Ritzau cited an example of a Danish manufacturer that had invested heavily in industrial robots to weld railings for just-in-time production. “But when it got an order in, with different lengths and numbers of rods, it took a month to reconfigure a robot for a new product,” he said. “They didn't have time or competencies in house, and it was too expensive to call in an integrator every time.”

“We saw robots there that were just standing unused,” Ritzau said. “With our software, it wouldn't take months to change. Shop-floor workers could do it in minutes, making robots more usable, increasing batch times, without sacrificing runtime. RiACT changes how these companies use robots, making robots a flexible production resource to increase ROI [return on investment].”

“Even integrators have the challenge that they can’t have specialists for each robot brand,” said Ritzau. “One integrator wanted to extend its portfolio with other robot brands but didn’t have the knowledge to do so. Our software enables them to extend and scale their operations.” 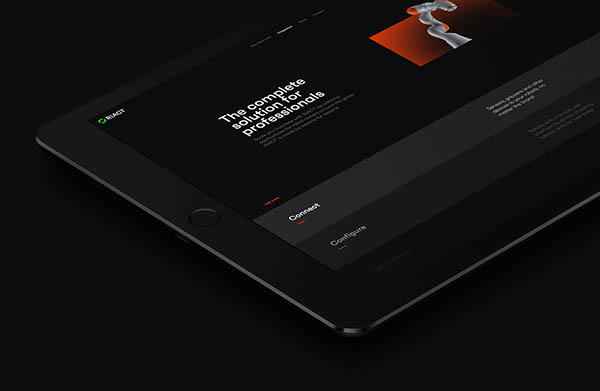 Several companies are offering software and interfaces that they claim will make robots easier to use; what differentiates RiACT?

“We define a new mode of designing robot programs—they can be modular and across robot brands, as opposed to brand-specific and unique solutions,” Ritzau said. “RiACT’s interface allows for multiple types of programs to be uploaded on the same robot throughout the year, with kinesthetic training and contextual sensors that detect any changes in the surroundings.”

“Some software providers are making simpler-to-use robots, but not necessarily more flexible,” he added. “Robots are still complex, and we're combining usability and flexibility. The pain point we do see is the costs of maintaining and reconfiguring robots over a lifetime, which our software can address.”

“Our goal is not to make a user interface so simple that anyone can become a robotic programmer,” said Ritzau. “We want a powerful tool for people who currently work with robots to do their work more efficiently and to make their robots do more advanced things. With RiACT, they have one place for everything.”

“At the core of RiACT’s offer is the potential for the system to accommodate changing contexts and manufacturing needs. We're seeing demand from manufacturers and integrators showing that our software and approach is of value,” Grossmann said.

“Our investors have further validated RiACT's approach as we help boost the Nordic region's economy,” he said. “We've put a lot of effort into our product, and it's important that we reach customers and put their demands into software that's useful for different applications.”

RiACT
RiACT software is designed to bring simplicity and flexibility to robot programming.

Free Webinar: Advances in Goods-to-Person Automation
Panelists in this webinar examined different aspects of goods-to-person automation and how to get the most out of warehouse robots...

Julia Computing Raises $24M Series A for Cloud Computing, Simulation
Startup to scale production and development of tools for pharmaceuticals, energy, and other sectors; former Snowflake CEO Bob Muglia to...

RiACT ApS
RiACT is developing intelligent software to enable robots to safely operate in the real world and help humans be more productive. Its interface is designed to make complex robots easy to use for people of any skill level.