Roam Robotics uses pneumatics and algorithms to improve mobility for soldiers and people with knee osteoarthritis. 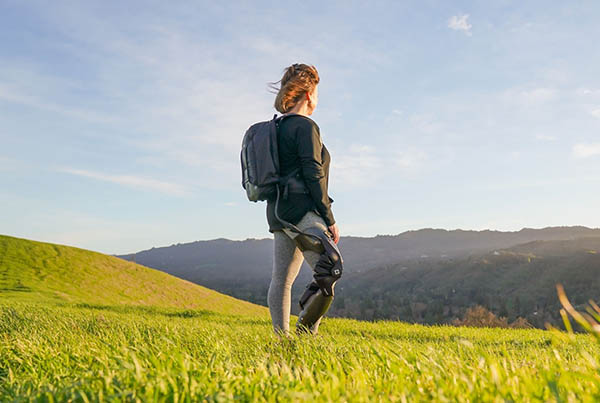 From rigid exoskeletons to more flexible robots, wearable systems promise to restore or augment human capabilities. They are beginning to be available for therapeutic, assistive, or industrial use. This spring, Roam Robotics announced the availability of its Ascend smart orthosis, which is designed to help relieve knee pain and improve patient mobility.

More than 20% of the global population is limited in mobility, noted Tim Swift, CEO of Roam Robotics. He founded the San Francisco-based company in 2013 to develop low-cost, wearable robots that could be easily integated into daily life.

“I was originally in engineering and genomics R&D, and I spent more than 12 years in medical devices at Johnson & Johnson,” said Sujit Dike, vice president of health at Roam Robotics. “I was attracted to Roam because it's the first serious play trying to tackle problems of aging populations and osteoarthritis from a different angle than surgical.”

Unlike electromechanical or hydraulic-powered exoskeletons, Roam Robotics said its systems are ”AI-informed” and use pneumatics to assist human motion.

“With air, we can generate a greater power-to-weight ratio than most other systems,” Dike told Robotics 24/7. “It also enables us to use certain materials, such as plastics or fabrics, to make our system more flexible, lightweight, and cost-effective. It's only a few thousand dollars, compared with tens or hundreds of thousands.”

“These materials also enable us to rapidly prototype and innovate, unlike traditional prototyping and 3D printing, which are time-consuming and expensive,” he added. “This enables us to tailor the system to human anatomy and more easily scale up.”

“The knee actuator transmits torque for movement,” he explained. “One area of customization is optimizing fit for comfort. We can take a user's measurements for the thigh and lap components and custom-fab them. It's a very scalable approach and allows us to make sure the device fits.”

“On the manufacturing side, we use injection molding, which offers several advantages,” said Dike. “We can produce more units in less time, it's cheaper, and it's easier to shape complex parts compared with metal. Without extensive fixtures with metal parts, we have less reliance on CNC and a more nimble manufacturing process, shortening our time to market.”

“Once we have the core components designed—with compressed air generating power—we can iterate many different designs, more rapidly develop software, and launch multiple products simultaneously,” said Dike. “Our Forge miliitary product is for rigorous activities in more extreme conditions, while at the other end of the spectrum, Ascend's medical market requires more stability and support for everyday movements.”

Roam built Forge for the U.S. military to increase soldiers' endurance, speed, and strength. The company is planning to offer Forge for other applications, such as emergency response.

Ascend includes advanced sensors, a lightweight frame, and the SmartPack controller. “There is a differentiation in ability for using sensors for everyday movement,” Dike said. “They must be able to pass data in real time and generate a response quickly. For example, wearers need to be able to go up and down steps or sit down.”

“With the first generation of Ascend, we can ensure that the brace is sitting on the leg without pinching and delivering optimized torque,” Dike said. “The military system also has the SmartPack but is more generic in terms of fit. Soldiers need less stability than older people but more power and freedom of movement.”

Roam Robotics, which raised $12 million in Series A funding in 2018, initially developed the Elevate product for skiers. However, the COVID-19 pandemic put that on hold, said Dike. What about other applications?

“Just in the U.S., 3 million to 5 million people fall in the treatment gap, and we can imagine using this platform for different parts of the body,” Dike acknowledged. “There are people looking at using our devices in warehouses, but we're focusing on Ascend and Forge right now.”

“The device is pretty robust in recognizing user intent,” said Dike. “It can understand if the user is trying to get up or sit down, kneel, or squat. It can also understand if someone is walking on uneven ground or climbing steps. In addition, the user can indicate intent with the SmartPack.”

“We're providing users flexibility in terms of the amount of support they need,” he noted. “If they're feeling more pain or fatigue, the users can adjust the power level higher or lower. It's a unique experience.”

A clinical study of knee osteoarthritis participants found an average of 46% pain reduction, and 67% showed functional improvement when using Ascend, according to Roam Robotics. The wearable device can run for one to three hours of continuous use, and the company is working to optimize battery life.

“Patients feel more confident and stable with the device, and the combination of software and powered support provides a certain degree of stability,” Dike said. “People used to using hands or a cane when getting up or sitting down can just rely on Ascend.”

Ascend is now available for pre-order, with “test drives” available in the San Francisco area. Roam Robotics expects to start shipping the devices later this summer.

“We're excited by the progress our engineering team has already made. We know that the more data we collect, the more hardware we put on users, we'll get more data on pain types, walking types, and different conditions,” said Dike. “The next generation of software will expand use cases to more extreme gait types, and AI could provide individual tailored responses and better detect intent.”

“We're already registered Class 1 with the FDA, formally indicated for knee osteothritis and instability,” he said. “With our choices of air-based power, lightweight materials, and affordability, we'll attain our objective of robots for everyday use.”

“We're already working on a second-generation device intended to be even less bulky and provide added stability for more extreme clinical conditions,” Dike said. “We want to be able to scale rapidly across the country next year and outside the U.S. in 2023.”