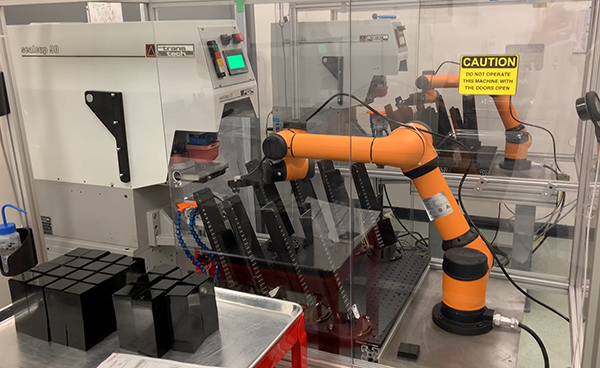 A3
In 2021, more companies such as Delphon looked to robots, such as Rapid Machine Operators shown here, to increase productivity and alleviate labor shortages.
By Robotics 24/7 Staff
·

The number of robots sold in North America set a new record in 2021, with 39,708 units sold at a value of $2 billion, a 14% increase over the previous high in 2017, said the Association for Advancing Automation, or A3, today. The organization said the growth was “propelled by a surge in non-automotive sectors.”

“More industries recognized that robotics could help reverse productivity declines and fill repetitive jobs human workers don’t want,” stated Jeff Burnstein, president of A3. “It is no longer a choice whether to deploy robots and automation. It’s now an absolute imperative.”

A3 said it is a leading global advocate for the benefits of automation. Its membership includes nearly 1,100 automation manufacturers, component suppliers, system integrators, end users, academic institutions, research groups, and consulting firms around the world.

Robots continue to spread beyond automakers

The number of robots sold in 2021 rose 28% over 2020, according to A3. It noted that fourth-quarter robot sales set new records and were up 9% over Q4 2020, demonstrating the continuing momentum of the previous nine months as more industries adopt automation.

Non-automotive orders now represent 58% of the North American total, said A3. It said that unit sales to non-automotive industries experienced the following increases in 2021 over the previous year:

“Hiring technicians and machine operators in the Bay Area is always difficult, and it became even harder during the pandemic,” said Joe Montano, president and CEO of Delphon, a customer of A3 member Rapid Robotics. “Meanwhile, a new generation of rentable robots had made the costs feasible for facilities like ours to make a measured entry into automation.”

“By hiring robots to operate machines for pad printing and component cleaning, we were able to redeploy eight operators to other jobs and see a $70,000 return on investment in less than a year,” he said.

October through December of 2021 marked the highest and second-highest quarter on record for units and revenue, respectively, said A3. Non-automotive customers ordered 6,618 robots in Q4, which represents 61% of total units ordered.

Automotive-related customers purchased 4,211 units, 39% of total orders. The following non-automotive industries in Q4 saw increases over the same quarter in 2020:

In addition to the Autonomous Mobile Robot (AMR) and Logistics Conference last October, A3 said it offers the following opportunities for the industry to gather:

A3
In 2021, more companies such as Delphon looked to robots, such as Rapid Machine Operators shown here, to increase productivity and alleviate labor shortages.