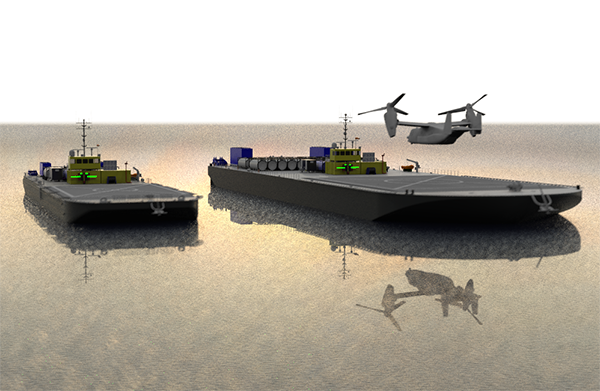 Sea Machines Robotics Inc., which develops autonomous command-and-control and advanced perception systems for marine industries, today announced that it has advanced its multi-year other transaction (OT) agreement with the U.S. Department of Defense’s Defense Innovation Unit. Phase 2 of the multi-phase contract delegates $3.1 million to the deployment of a full-scale, oceangoing replenishment platform.

“As a leading developer of autonomous control systems, Sea Machines is bringing innovation and modern design to the DoD,” said a Sea Machines representative. “The extension of our contract represents the intersection of traditional sectors, such as government, and the capabilities of autonomous technology. Our extended contract represents the confidence the DoD has in our technology and ability to deliver.”

The Boston-based company was founded in 2015 and builds autonomous vessel software and systems. They are intended to increase the safety, efficiency, and performance of ships, workboats, and commercial passenger vessels.

The kits being prototyped will include Sea Machines’ SM300 autonomous control systems and a perception suite with advanced computer vision. Each modular kit will meet U.S. Navy criteria and will comply with classifications and regulations from the DoD’s aviation bodies.

“We are working with NAVAIR and multiple DoD laboratories to ensure the kit meets select criteria for safety standards,” said Philip Bourque, head of business development at Sea Machines.

In October 2020, a proof-of-concept demonstration showed that the kit could enable a barge to host and distribute fuel, he said. In addition, rotary-wing aircraft could land on the remotely monitored and operated barge. The company is now transitioning to the design and trial stage.

“We proved the viability, and Phase 2 is focused on engineering of an operational kit and supplying key elements which will be used in Phase 3,” Bourque told Robotics 24/7.

The project's goal is to successfully deploy the Sea Machines autonomous command-and-control kit on multiple barges. This will increase the U.S. military's agility in deploying and replenishing assets around the world, according to Sea Machines.

“This kit provides new solutions for logistics challenges within the DoD,” said Bourque. “Having a self-propelled and autonomous-capable barge for logistics purposes makes other support vessels and high-value assets available for other tasks.”

“This program is a perfect example of autonomous technology opening up new operational capabilities and leveraging new technology for operational advantages,” said the company. “Sea Machines is an independent U.S.-made startup providing real-world, high-tech solutions to the U.S. Department of Defense and competing alongside and with the multi-billion legacy defense contractors.”

Assisting Sea Machines in the project is FOSS Maritime Co., a maritime transportation and logistics provider based in Seattle. FOSS is responsible for providing the naval architecture, support engineering, and operations management to outfit a remotely commanded deck barge to land helicopters and host a scaled fueling station for aircraft, surface vessels, and shore replenishment.

“Sea Machines is leveraging support from multiple SMEs [small and midsize enterprises] for this project, including Huntington Ingalls and Bell Flight [a subsidiary of Textron Inc.],” Bourque said. “Both of these teammates have extensive experience with the design, requirements, and best practices for flight-deck operations.”

What is the next milestone for this project? “The culmination of Task 2 will be to field the kit with live fuel and several rotary-wing aircraft,” replied Bourque. “The government will be making its next evaluations of the kit in Spring ‘22.”

Starship Technologies Raises $100M in 30 Days, as Autonomous Delivery Demand Tripled in 2021
Starship also says it has passed the milestone of 3 million autonomous commercial deliveries, with orders growing by more than 60,000 per...