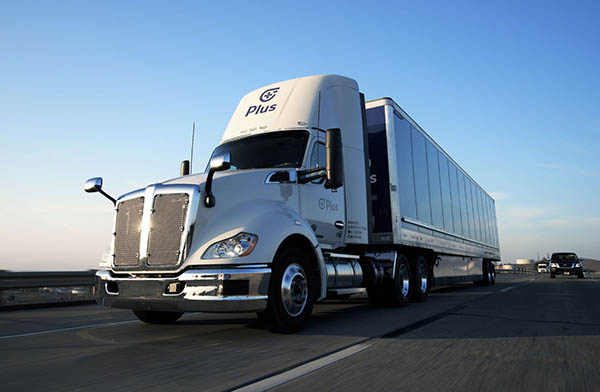 Plus
Plus has been testing L4 autonomous trucks.
By Robotics 24/7 Staff
·

Not every marriage works out. Self-driving truck developer Plus and Hennessy Capital Investment Corp. V yesterday announced that they have mutually agreed to terminate their previously announced merger agreement and plan of reorganization. Plus cited “recent developments in the regulatory environment outside of the U.S.” and said it is considering restructuring “certain aspects of its business.” The company said it remained open to future discussions with Hennessy Capital about a potential business combination.

“Plus has achieved tremendous momentum in executing against our plans to bring autonomous trucks to market globally,” stated David Liu, co-founder and CEO of Plus. “In 2021, we started delivery of our driver-in autonomous driving solution, PlusDrive, to customers and received thousands of pre-orders.”

“We also completed a fully driverless truck demo on a highway that showcased the future of trucking,” he said. “We are grateful for the support we have received from the Hennessy team, whose commitment to sustainable commercial transportation technologies we share.”

Separation anxiety due to foreign ownership

Special-purpose acquisition company (SPAC) Hennessy Capital (HCIC V) raised $345 million in its initial public offering (IPO) in January 2021 and is listed on the Nasdaq Capital Market as “HCIC.” Nov. 8 was the “outside date” in the original merger agreement for canceling the deal with Plus.

“HCIC was formed to merge with a company that provides sustainable technologies,” said Daniel J. Hennessy, chairman and CEO of HCIC V. “We believe in the potential for autonomous trucks to transform the trucking industry and in Plus’s ability to continue its global deployment of autonomous trucking technology. We remain optimistic that the parties can once again explore a business combination in the near term that will further advance sustainable transportation.”

Last week, FreightWaves speculated that concerns about Amazon.com Inc.'s potential purchase of 1,000 vehicles from Plus, which operates largely in China and has Chinese shareholders, could provoke an investigation by the Committee on Foreign Investment in the U.S.

Neither party will be required to pay the other a termination fee as a result of the mutual decision to terminate the merger agreement.

The merger would have yielded about $500 million in gross proceeds at closing, bringing Plus' valuation to approximately $3.3 billion. The company had previously raised $420 million in February.

Plus has other technology relationships with venture studio Good Machine and Teledyne FLIR, among other U.S.-based companies. It also announced an expansion in Europe last month.

Plus
Plus has been testing L4 autonomous trucks.

Plus.ai
Plus claims to be a world leader in self-driving truck technology. Headquartered in Silicon Valley with R&D offices in China, it was founded in 2016 by a group of serial entrepreneurs and industry veterans with over 20 years of experience in high tech and artificial intelligence....

Plus Starts Development With Teledyne FLIR to Test Thermal Cameras for Autonomous Trucks
Amazon in Talks to Buy Stake in Autonomous Truck Startup Plus
Good Machine Sustainability Projects Get Autonomous Lift From Plus Trucks
Top 10 Robotics Transactions of May 2021
Autonomous Trucking Firm Plus to Enter SPAC Merger, be Valued at $3.3B