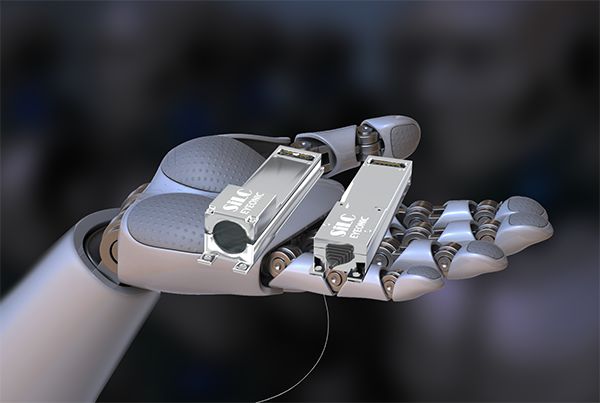 Limitations in the ability to manufacture commercial-grade lidars have limited market growth, but SiLC said it is applying mature semiconductor fabrication processes to the challenge. The company claimed that Eyeonic is the first frequency-modulated continuous-wave (FMCW) sensor of its kind, integrating lidar functionality into a single, tiny chip.

“This is the first time that someone makes coherent 3D sensing available to the market at an affordable price,” said Ralf J. Muenster, vice president of business development at SiLC. “Nobody has done this at the chip level.”

“SiLC's team has developed and productized more silicon photonics products than anyone else,” Muenster told Robotics 24/7. “We use a proprietary process to create lasers on chips at our fabrication partner in Japan. We can deliver 10 to 100 times better performance than our competitors across 10 or more parameters.”

“Eyeonic consists of one or more proprietary FMCW vision cores,” he said. “It integrates lasers, amplifiers, detectors, and passive devices into a single photonic chip. Each core processes returning photons one pixel at a time.”

“Eyeonic is similar to an optical networking transceiver—it emits and receives photons,” explained Muenster. “What's different about this versus time-of-flight sensing or CMOS [complementary metal-oxide semiconductor] cameras is that traditional sensors just look at the intensity of light and variation. They use techniques of modulation of attitude and intensity to determine round-trip time.”

“Our coherent sensors send out photons, which interact with measurement targets,” he said. “We can get instantaneous Doppler shifts and track movement for rapid analysis and threat detection.”

“Rather than just looking at intensity, Eyeonic gathers all attributes of photons, which is way more useful for measurements,” Muenster claimed. “It helps machines see better, particularly for the velocity aspect.”

“With linearized, polarized photons, SiLC's sensors can pick up the material properties of a surface, which can aid in object identification and classificiation,” he added. “It can be used to distinguish skin, cloth, or metal for industrial applications or autonomous vehicles. Of course, we could use multiple frequencies for spectroscopy in the future. We haven't even scratched the surface yet for applications.”

Sensing in a wide range of conditions

SiLC said its coherent 3D sensor works in any lighting condition, is immune to interference from sunlight or other sensor signals, and uses an eye-safe wavelength of 1,550 nm. Bright sunlight has been a perception challenge for mobile robots in loading docks and other indoor/outdoor threshholds.

“Human beings detect objects in their peripheral vision, and then turn to focus their main vision on something, but AI determines edges and tracks by frames,” Muenster said. “The power of velocity and vectors is that we can tell immediately with our system rather than have to train machine learning.”

Because SiLC's technology analyzes every photon, it can perceive in multiple modalities simultaneously, said Muenster. With high-resolution, single-channel sensing, it's possible to have parallel sensing and color fusion for more precise 3D perception, he said.

“It's like iPhone facial recognition at 30 meters rather than arm's length, which isn't doable with time-of-flight cameras,” Muenster said. “It's all done at low power, and it saves bandwidth. With real-time precision measurements and intensity, we can see glass or ice and classify objects by speed, such as a cyclist or a pedestrian.” 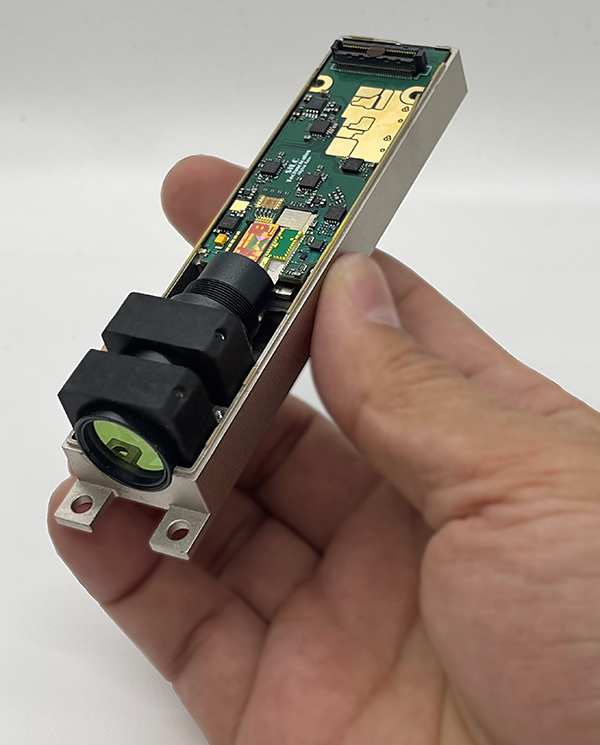 “SiLC is working with Bluespace on 4D predictive perception, superimposing 2-second predictions,” he said. “This can be done on rules-based algorithms rather than through training. This can run on a small ARM core and is less expensive than inference-based code.”

“Fiberless vision sensors have long been sought after as they enable the lowest cost in a compact configuration,” the company said. “The fiber-pigtailed Eyeonic allows for design flexibility by supporting configurations where the FMCW lidar transceiver and scanning unit are at different locations.”

“With rich data and easier identification of moving objects, we'll have a new era of smart automation and applications,” said Muenster. “You can have behavior and motion analysis, of say, activity on a casino floor. With high-accuracy sensing, you could improve robotic pick-and-place and palletizing operations with lower laser power.”

Although SiLC is working on hardware and software, it is leaving applications to systems integrators. The company plans to offer reference designs and evaluation units for fully integrated systems based on the Eyeonic platform.

Founded in 2018, SiLC has about 40 employees and has raised $31 million so far from investors including Sony and Osram.

“Our only close competitor is Intel, but its silicon photonics platform is optimized for data centers,” Muenster said. “It announced that its Mobileye unit is working on self-driving cars by 2025, but we're launching now.”

“We've shipped millions of data center devices with similar technology, so we have the manufacturing at scale in our own proven wafer fab,” he added. “We've perfected our own PDK [process design kit] for imaging and are the only ones with polarization.”

SiLC will demonstrate the Eyeonic Vision Sensor at CES 2022 from Jan. 5 to 8 in Las Vegas. E-mail SiLC at contact@SiLC.com for more information or to schedule an appointment.