Solinftec's Solix Sprayer joins its Solix Scout robot, which is already in use on farms in North America and Brazil. 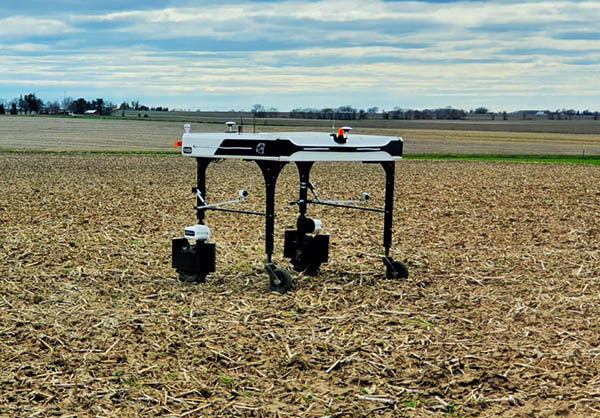 Solinftec today announced that it is expanding its Solix agricultural robotics offerings. In addition to its Solix Scouting robot, the company has unveiled its Solix Sprayer robot designed to detect and spray weeds.

“The Solix Sprayer is designed to not only monitor and scan fields like the original scouting version, but [also to] detect and manage weeds with technology,” he added. “[It] allows the device to spot-spray into the plant instead of from above, eliminating drift and social compaction caused by larger machines and helping to lower environmental impact.”

Founded in 2007, Solinftec said customers use its technology across 22 million acres to predict upcoming conditions, solve problems, and plan. It claimed that its digital agriculture systems can generate up to 70% efficiency improvements.

The company, which raised $60 million in May and has headquarters in São Paulo, Brazil, and West Lafayette, Ind., employs more than 800 people worldwide. It will be exhibiting at the 2022 Farm Progress Show this week in Boone, Iowa.

The new Solix Sprayer robot will provide autonomous spot-spray applications on grower’s fields, according to Solinftec. Like the Solix Scouting robot, the spray robot is powered by four solar panels that control the drive system and the spray system.

Solinftec said its robots can provide layers of maps for data analysis and more useful data to the grower virtually 24/7. The Solix spray robot will provide weed spot-spray maps with analysis on inputs saved.

It can service up to 96 acres per day, depending on the field shape and terrain, said the company. The robots serve grain crops, such as corn, soybeans, cotton, and wheat.

How does the Solix Spayer compare with conventional sprayers?

“Solix Sprayer is 40 ft. in size, end-to-end, and it can manage between 300 and 500 acres per week,” replied Henrique Nomura, chief technology officer at Solinftec. “Once a week, the robot returns to the starting point to treat weed growth with 24/7 autonomy.”

Nomura cited the following benefits to Robotics 24/7 in comparison with conventional sprayers:

Solix Sprayer and Scouting use the same unique platform, he noted. “Each one has several sensors meeting different needs of countries, regions, and cultures,” said Nomura.

Solinftec has partnered with research, development, and manufacturing company McKinney Corp., which will produce the Solix Sprayer. The companies said the mobile robot will be commercially available in 2023 to the entire agricultural market, including farmers, cooperatives, and ag-retailers.

Nomura said McKinney “is helping us with inputs and mechanical insights, making the structure and entire robot assembly are constantly improved. They will be responsible for the first pre-manufacturing series and future improvements.”

Pilots for the Solix models are currently running in North America with the GROWMARK agricultural cooperative in Bloomington, Ill.; Purdue University in Indiana; and Stone Farms Inc. and the University of Saskatchewan in Saskatoon, Saskatchewan.

In Brazil, electronics manufacturing and service company Hi-Mix Eletrônicos S/A produces the Solix Scouting robot. It has been commercially available there since last April.

“Since the beginning, we have identified a strong culture in Solinftec to the agriculture market, investing heavily in R&D, plus a determination for quality, flexibility, and agility for the best time to market,” said Daniel Carvalho, co-founder Hi-Mix Eletrônicos.

“The pilots we carried out in Brazil, focused on pests—insects,” said Nomura. “[They] showed a great identification of insect models with a very large reduction in the application of chemical products.”

“In the U.S., we had a weed identification with a reduction of up to 70% in herbicide use,” he noted. “In Canada, with the Scouting model, we identified several types of weeds and had good feedback from customers regarding pest identification, herbicide application, and monitoring of the evolution of the crop stage.”

Solinftec to Release Solix Sprayer Robot for Precise Pesticide Application
Solinftec's Solix Sprayer joins its Solix Scout robot, which is already in use on farms in North America and Brazil.
More Agriculture