Freight operators are facing many challenges, but advances in perception could help bring self-driving trucks to roads at scale sooner, says Aeva. 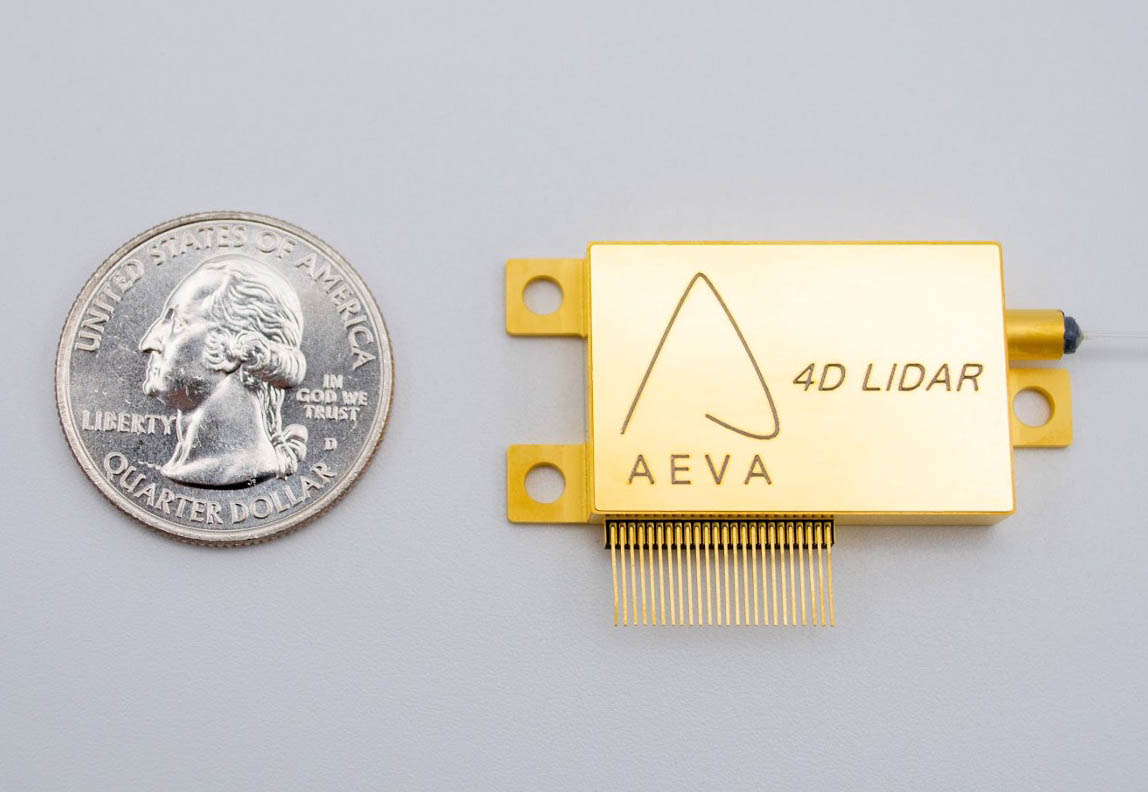 Aeva
4D lidar system on a chip.
By Eugene Demaitre
·

As retailers deal with escalating e-commerce expectations, labor shortages, and global supply chain snafus, some have gone so far as to charter their own container ships. Autonomous trucks have also garnered much interest over the past year, even before the holiday rush. Lidar supplier Aeva Technologies Inc. is working with developers to bring self-driving freight to realization.

The global economy depends on the $800 billion trucking industry, which moves 72% of consumer goods. The industry needs to find 1 million new drivers over the next decade, so the need for autonomous trucks is urgent, according to Aeva.

Founded in 2017 by former Apple engineers Soroush Salehian and Mina Rezk, Aeva said its mission is “to bring the next wave of perception technology to broad applications, from automated driving to consumer electronics, consumer health, industrial robotics, and security.” The Mountain View, Calif.-based startup said it has relationships with many Tier 1 automotive suppliers, OEMs, and other industry players.

While autonomous trucks won't arrive in time for this Christmas, they can provide hope as the logistics industry is on the cusp of major technological change, said Salehian. The solution to “freightmares” could be the technology in a small processor, he added.

Aeva said it has developed “4D” lidar that provides sensing capabilities over 500 m (1,640.4 ft.) on a single chip. This offering is key to giving self-driving trucks more time to make decisions at highway speeds, the company said.

While companies such as Waymo and Tesla are working on a range of autonomous vehicles, Aeva is collaborating with self-driving truck specialists TuSimple and Plus.

In addition, Aeva announced plans in January to raise $200 million in a deal with InterPrivate Acquisition Corp., a special-purpose acquisition company (SPAC).

Peter Kuepper, vice president of business development at Aeva, replied to the following questions from Robotics 24/7 about lidar and self-driving trucks:

​​How will semi-autonomous and autonomous trucks help with today's snarled supply chains?

Kuepper: Three factors have created a tipping point for the acceleration in adoption of autonomous trucking: booming consumer retail shopping, shipping congestion at our ports, and a shortage of truck drivers available to transport goods from ports to stores and homes.

Roughly a third of the nation’s imports normally flow through the ports of Los Angeles and Long Beach, [Calif.], where a record-setting 179 ships were logjammed in mid-November waiting for their turn to dock and unload. As those containers move from ships to trucks, it puts tremendous stress on a trucking industry already facing a shortage of 80,000 drivers.

Fixing the trucking bottleneck is a key factor in solving our supply chain crisis. Until the industry moves to fully autonomous trucking, driver-assisted solutions like those from our customers, TuSimple and Plus, will help newer, less-experienced drivers perform their jobs safer and more efficiently. Sophisticated automation systems will rely on state-of-the-art perception technologies like lidar.

Fully autonomous trucks, with the potential to operate 24/7, can soon move freight from clogged ports to store shelves more frequently and safely, while also cutting delivery costs and carbon emissions.

How is Aeva's lidar technology able to “see” up to 500 meters?

This allows us to achieve ultra-long detection ranges exceeding 500 m. Together with our unique capability of measuring instant velocity for each pixel, we can classify objects at these long distances using a fraction of the number of points needed compared to legacy time-of-flight lidars.

This is a fundamental step change in capability that provides crucial safety enhancements for automated driving, especially in applications and scenarios where vehicles are traveling at highway speeds and sufficient braking distance is safety-critical.

What levels of autonomy is Aeva working toward with its partners TuSimple and Plus? Do you expect advanced driver-assistance systems (ADAS) and driver augmentation before self-driving trucks?

Kuepper: Plus is starting with “driver-in” systems, where the truck operates autonomously under specific conditions, like highway driving, and the driver is there to take control if needed. Of course, its plan is to move to full autonomy in the years ahead.

We’ve built our sensors for full autonomy, and our customers see them as critical because they do more than just sense range like today’s legacy lidar sensors. Aeva’s 4D sensors also measure the instant velocity of each pixel of data.

Coupled with ultra-long-range performance and immunity to interference from sunlight and signals from other lidars, Aeva's technology is gaining momentum as a must-have sensor for safe automated driving.

Experience gets partners, investors on board

How does Aeva approach its partnerships with OEMs and automotive suppliers? How do your founders bring industry experience, connections, and investor credibility?

Kuepper: Both of our founders, Soroush Salehian and Mina Rezk, have extensive experience in working with cutting-edge technologies and bringing products to market at high-volume scale. In addition, Aeva is led by a multidisciplinary team of engineers and operators experienced in the field of sensing and perception.

We’re backed by investors like Porsche SE, the parent company of Volkswagen Group and the world’s largest automotive OEM, as well as Lux Capital, among others.

Kuepper: Fleets are coming, and they’re already using Aeva’s technology. TuSimple’s Autonomous Freight Network, which is a fleet of trucks used by customers like UPS, is making regular trips between hubs in the Southwest, with plans to expand to Florida soon and across the U.S. by 2024.

And Amazon, which is one of the largest retailers and shippers, is already using Plus’ autonomous technology. We recently inked the industry’s first lidar production agreement with Plus, which is planning to bring over 100,000 autonomous trucks with its PlusDrive system to roads in the U.S., China, and Europe by the end of 2025.

Aeva stays in the lidar lane

Does Aeva have any plans for self-driving passenger cars or mobile robots for deliveries?

Kuepper: We don’t have plans to start making vehicles or delivery robots ourselves. Our belief is that no matter the use case, all autonomous vehicles and robots will need advanced 4D sensing and perception technology.

We have strong partners like Tier 1 suppliers Denso and ZF to help us scale into automotive applications. Aeva also recently announced an agreement with Nikon to help us enter the industrial automation and metrology markets.

Both sensing and autonomous vehicles are hot and competitive markets right now—how does Aeva stand out?

Kuepper: Aeva’s 4D lidar is fundamentally different because our technology delivers the fourth dimension of perception by directly measuring velocity in addition to range.

We’ve seen early traction in the trucking industry and are having very positive conversations with others in the automotive industry who are excited about what we’re working on.

What are your plans for the coming year?

Kuepper: 2022 is going to be a transformative year for Aeva and our customers as we continue on our path to develop the industry’s most advanced 4D lidar technology. Of course, I can’t elaborate much more than that at this time, but we look forward to keeping in touch.

SiLC Partners With Cloud Light for Volume Manufacturing of Eyeonic Vision Sensors
As it it looks to scale up, the lidar sensor maker is working with the Cloud Light to manufacture its...
More Lidar