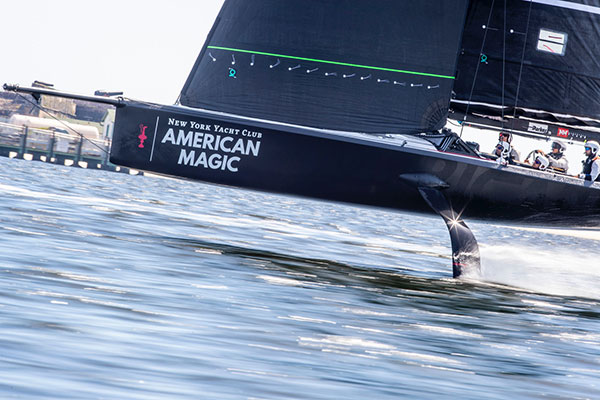 At the RAPID + TCT 2019 event, Stratasys is unveiling a supplier agreement with the New York Yacht Club, American Magic, a challenger for the 36th America’s Cup. American Magic is the combination of three racing programs and a leading yacht club—joining forces to win the America’s Cup, the highest prize in sailing and the oldest event in international sports.

American Magic is using the Stratasys Fortus 450mc, which is capable of 3D printing carbon fiber reinforced FDM Nylon 12. American Magic boats are specifically designed with aerodynamics in mind, and supported by the team’s Official Innovation Partner, Airbus. The boats are mostly constructed of carbon fiber material, including the critical sails, mast and hull.

American Magic is one of seven international entrants in the America’s Cup, scheduled to commence on March 6 in Auckland, New Zealand. The 36th edition of the event boasts teams from the US, New Zealand, Italy, UK, Malta and Netherlands. Prior to the race, the teams will compete in multiple America’s Cup World Series regattas and the Prada Cup, the Challenger Finals.

“The demands of sailing are very similar to the speed, loads and lightweight requirements mandated by aerospace. That’s why carbon fiber is such a natural choice for material,” said Pat Carey, senior vice president at Stratasys. “At Stratasys, we have decades of experience enabling leaders in aerospace and high-performance sports to transform their manufacturing processes through 3D printing. American Magic is a great example of innovative manufacturing leaders pushing the boundaries of success with 3D printing.”

“The America’s Cup is a racing event like none other and tests the limits of design and manufacturing,” said Robyn Lesh, design team engineer at American Magic. “Solid aerodynamics is truly the key, as our vessels must essentially ‘fly’ over the water with durable, extremely light-weight parts for racing. Whether it’s for developing prototypes, controllers, brackets or fittings—Stratasys 3D printing ensures we can quickly build, iterate and produce industrial-quality parts necessary to take home the Cup.”

American Magic is using 3D printing for a range of applications, including prototypes and brackets, fittings and mounts. This work is partially aimed at improving aerodynamic loads on the team’s test boat, dubbed “The Mule.” The Mule is a half-sized version of the AC75 racing boats currently in production for the next America’s Cup.

DE’s editors contribute news and new product announcements to Digital Engineering 24/7 and the Robotics 24/7 sites.
Press releases may be sent to them via DE-Editors@digitaleng.news.

Sarcos Technology and Robotics Corp. Hones Robots, Exoskeletons With Humans in the Loop
Sarcos, which recently acquired RE2 Robotics, has continued developing reliable and collaborative systems for industrial use.
More Components