The International Federation of Robotics has analyzed China's new industrial plan for the world's largest market. 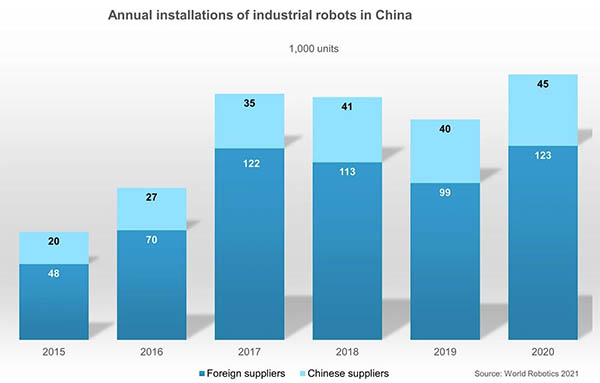 The People's Republic of China, which is already the world's largest market for industrial automation, has set its sights on becoming the biggest innovator and producer of robotics, reported the International Federation of Robotics today.

“China is by far the biggest robot market in the world regarding annual sales and the operational stock,” said Milton Guerry, president of the International Federation of Robotics (IFR). “IFR's robot density statistic is a useful indicator of China's dynamic developments, counting the number of industrial robots per 10,000 employees. China´s robot density in the manufacturing industry currently ranks ninth globally (246 units), compared to 25th (49 units) just five years ago.”

China's latest five-year plan for the robotics industry, released by the Beijing-based Ministry of Industry and Information Technology (MIIT), focuses on promoting the country as a global leader for robot technology and industrial advancement. The IFR's statistical department issued its report about the domestic and foreign engagement in that market.

Robots Reach New Peaks in China in 2020, Says the IFR:

Foreign robot manufacturers are the main suppliers in China's race to automation, with a combined market share of 73%, said the IFR. Although there has some volatility in the past eight years, this share has been constant, the organization noted.

In 2020, the installations of robots from abroad—mainly imported from Japan, South Korea, and Europe—grew by 24% to 123,030 units. This number also included units produced in China by non-Chinese suppliers.

Chinese robot manufacturers mainly deliver to their domestic market, where they held a market share of 27% in 2020 with 45,347 units shipped, according to the IFR. While the U.S. does not have a similarly centralized industrial policy, China's government recently released its second five-year plan.

“China released the second five-year development plan for the robotics industry – following 2016 to 2020,” explained Song Xiaogang, executive director and secretary-general of the China Robot Industry Alliance (CRIA). “The plan has great guiding significance for promoting the high-quality development of China's robotics industry during the 14th period.”

AutoX Passes 1,000 Vehicle Milestone for Its RoboTaxi Fleet, the Largest in China
The autonomous vehicle tech developer is also opening a RoboTaxi operations center in San Francisco to expand testing.