Cobalt Robotics Integrates With Envoy Workplace Platform, Looks Ahead to 2023 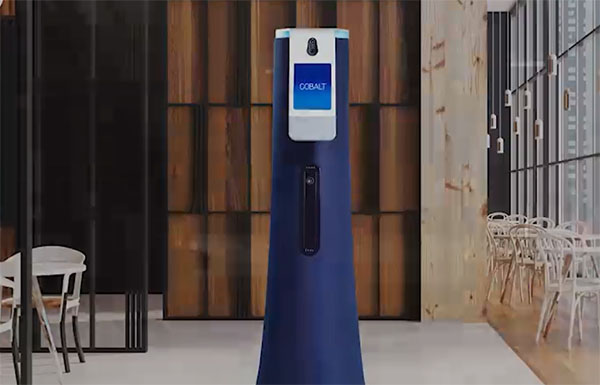 Cobalt Robotics Inc. today announced that it has integrated its autonomous security robots with Envoy Inc.'s workplace software platform. The companies said their innovation enables Cobalt robots to greet worksite visitors and synch their information with Envoy's visitor logs. The system can then approve visitors for entry, providing an additional layer of security and privacy, they said.

“The return to office and rise in satellite offices are creating challenges for companies that still need to provide services like security and reception,” said Mike LeBlanc, president and chief operating officer of Cobalt Robotics. “This new integration with Envoy Visitors demonstrates how we’re responding to the demands in the industry and providing automation solutions that customers need to streamline processes in the workplace.”

Cobalt Robotics said its security service unifies robotics, machine learning software, and expert human oversight. The Fremont, Calif.-based company claimed that its technology and 24/7 security services team can improve efficiency and predictability at substantially reduced costs. This allows guards to focus on tasks that require judgment, empathy, and decision making, according to Cobalt.

Cobalt Robotics said additional features and benefits of its collaboration with Envoy include:

Cobalt Robotics said its customers include enterprises such as Slack, DoorDash, and Woven Planet. The Deloitte Technology Fast 500 recently ranked it No. 147 among the fastest-growing technology, media, telecommunications, life sciences, financial technology, and energy companies in North America.

“It has been a crazy couple of years,” said Erik Schluntz, co-founder chief technology officer of Cobalt Robotics. “A lof of our newest deals have been expansions with existing customers who want more value. This speaks more than new sales because they've experienced our product.”

The first is that large language models (LLMs) such as GPT 3 will lead to more autonomously written text for customer support, sales, and even writing code.

“Language models are a giant neural network that has read the entire Internet,” Schluntz told Robotics 24/7. “They were given the simple task of predicting the next word, and then that algorithm became 1,000 times larger than any other neural network. They can now predict answers to questions.”

“However, what AI is good at is different from what we expected it to be good at,” he noted. “As OpenAI opened up the API, I've played with it. It can pass a Turing Test, but it still makes mistakes. What's really exciting is using language models as a building block for other AI applications—not just generating text, but generating images or interacting with robots.”

Schluntz's second prediction is that LLMs will enable engineers to build simple sets of instructions instead of needing to program every possible thing a robot might need to do.

“The grounding problem in AI is that it has been good at classifying images of a dog or a cat, but it doesn't understand,” he said. “LLMs are starting to feel like true understanding—not just how pixels look different but the web of associated knowledge.”

“With LLMs, you could just program in base instructions for a kitchen helper robot on how to grab things from a fridge and put them together,” said Schluntz. “You could say, 'Get me a peanut butter and jelly sandwich,' and it could parse those steps on its own. If you asked 'Make me a Reuben,' it could know what a Reuben is and follow high-level instructions.”

AI to change the nature of work

Schluntz also predicted that AI will affect so-called white-collar work more than blue-collar work, a reversal from past waves of automation.

“For example, CoPilot is an AI that can write code, DallE2 and StableDiffusion can produce human-level artwork, and GPT3 can write human level text for articles, e-mails, etc.,” he said. “I'm a huge believer that jobs won't be automated, but they will be augmented. In the '90s, compilers didn't put programmers out of work, and Photoshop didn't put artists out of business.”

In his fourth prediction about AI and robotics for 2023, Schluntz said that humanoid robots might start seeing commercial use in environments such as Tesla factories. “We're going to see a lot more robots out in the wild,” he said.

However, he cautioned against expecting prompt progress. “History is littered with the graveyard of general-purpose robotics companies,” Schluntz said. “People designed technologies looking for a purpose. In the far future, it makes sense, since the world is designed for humans.”

“At Cobalt Robotics, we've been focused on scaling up and improving human-robot interaction,” said Schluntz. “Anywhere a wheelchair can go in the office environments we're targeting, we can go. It's a stepping stone toward general-purpose robotics, providing security at night and being a receptionist during the day.”