Einride said its test is the first time a fully electric, autonomous heavy-duty vehicle without a driver aboard operated in Tennessee. 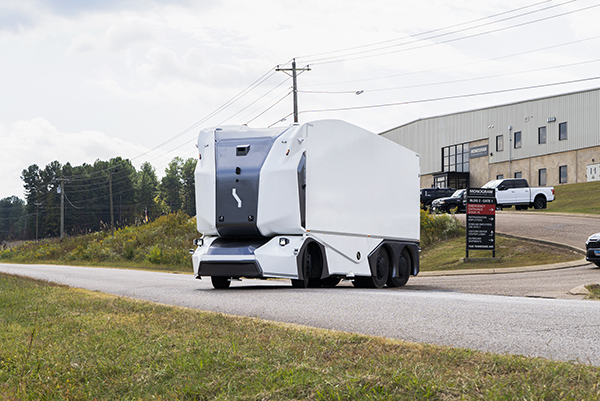 While self-driving car developers have recently suffered setbacks such as the shutdown of Argo AI, autonomous trucks are moving forward. Einride AB last week said it had successfully completed a commercial pilot of its autonomous, electric vehicle in Selmer, Tenn. The Stockholm-based company claimed that it was the first operation of such a vehicle without a safety driver on board on U.S. public roads.

“The completion of this pilot is a momentous step in the operations of autonomous heavy-duty road freight in the U.S.,” stated Robert Falck, founder and CEO of Einride. “This shows how Einride’s new type of vehicle—one that has reshaped the future of shipping—is here today and unlocking real industry change.”

Founded in 2016, Einride said it was the first company to deploy an autonomous, electric vehicle (EV) on a public road in Sweden in 2019. The company said its Einride Saga freight mobility platform, plus its fleets and charging and connectivity networks, enable shippers to transport goods competitively and sustainably.

Einride has worked with GE Appliances to deploy a connected vehicle fleet since October 2021. Since then, GE Appliances has doubled its fleet of Einride Trucks and plans to use Einride Saga to reduce emissions throughout its supply chain.

Earlier this year, the National Highway Traffic Safety Administration (NHTSA) granted the first U.S. approval for operations of Einride's electric, autonomous vehicle. The company, whose U.S. headquarters are in New York, worked closely with GE Appliances and state and county officials. They conducted the Tennessee pilot over two weeks.

The Einride vehicle safely transported goods between GE Appliances' factory and warehouse. It also supported real-time workflows through a partnership between Einride and Ericsson, which provided a private network that enabled a remote operator to remotely monitor the vehicle.

The companies said they chose GE Appliances’ Selmer facility as the pilot launch site because it provided a safe environment for testing while meeting real demand for movement of goods.

“In order to lead, you have to think ahead and think differently, said Harry Chase, senior director of central materials at GE Appliances. “Working with Einride on this pilot on public roads in Tennessee helped us better envision and understand what we need to do differently to be at the forefront of autonomous and EV implementation. At GE Appliances, we believe you need to continuously experiment with new technology in order to learn.”

Operations with Electrolux follow a successful partnership in Sweden and are expected to reduce CO2 emission by 92% in comparison with driving with diesel. Other partners have seen a similar decrease while matching the cost of diesel, said Einride.

“Germany is in the driving seat of Europe; where it goes others follow suit,” said Falck. “We have the opportunity and technology to bring the biggest change to the freight industry since the invention of the internal combustion engine and are ready to join forces with local partners to make transportation history.”

“The German road freight sector is facing its biggest challenge to date, with rising fuel and energy costs, a driver shortage and the government demanding emissions be cut in half by 2030,” said Robert Ziegler, general manager for Europe at Einride.

“We know that through digitalization, automation, and electrification, we can dramatically reduce costs, delivery times, and emissions,” he noted. “Now it’s time for German shippers to adopt a new generation of freight technology and future-proof their business.”

Einride plans to initially set up a regional office in Berlin and logistics hubs in Hamburg and the Ruhr area. It also plans to install a charging grid along Germany's major commercial routes and neighboring regions.