The latest addition to the popular robot family has a 14kg payload, says FANUC. 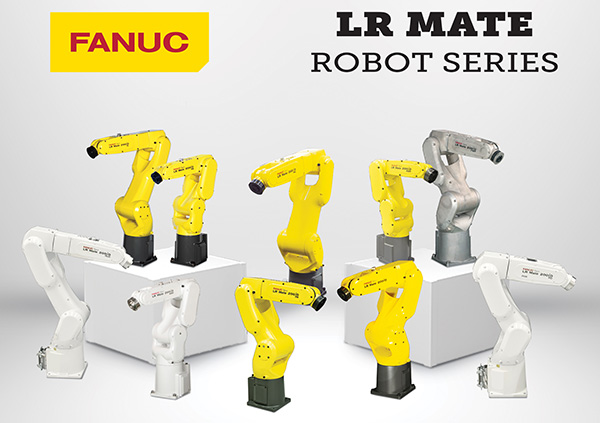 FANUC America
FANUC America has updated its LR Mate tabletop robot line with models for cleanroom and food-safe environments, among other features.
By Robotics 24/7 Staff

FANUC America last month announced the LR Mate 200iD/14L, the tenth model variation of its LR Mate series of tabletop industrial robots. The Rochester Hills, Mich.-based company said that since the LR Mate was launched nearly 30 years ago, it has become one of FANUC's biggest sellers, with more than 70,000 units installed worldwide.

FANUC attributed the popularity of the robot series to its reliability, as well as to features including its light weight and tabletop size, which is often compared to the size of a person’s arm.

In addition, the LR Mate can process or handle parts weighing up to 14kg (30.8 lb.) in the automotive, e-commerce and warehousing, food and beverage, medical device, pharmaceutical, and many other industries.

Ten models include cleanroom and washproof versions, each with various wrist speeds and reaches to accommodate even the most limited workspace, the company said.

“The LR Mate was introduced in 1992, and has been deployed in a variety of traditional manufacturing and service applications,” stated Carolyn Chase, product manager for the LR Mate robot series at FANUC America. “Some of the most interesting things we’ve seen this robot do include serving coffee, fulfilling orders in retail stores, and even preparing fast foods.”

These small tabletop robots can be equipped with a variety of intelligent features, including robot vision and force sensing for even higher levels of accuracy and productivity, said FANUC. It added that the robot's features and benefits include the following:

FANUC America Corp. is a subsidiary of FANUC Corp. in Japan, and it provides computer numerical control (CNC) systems, robotics, and factory automation. The unit said its “innovative technologies and proven expertise help manufacturers in the Americas maximize productivity, reliability, and profitability.”

FANUC added that it embraces a culture of “Service First,” which means that customer service is its highest priority. FANUC America is committed to supplying its customers with parts and support for the life of their FANUC products.

FANUC America has facilites across the U.S., as well as in Canada, Argentina, Brazil, and Mexico.

FANUC America
FANUC America has updated its LR Mate tabletop robot line with models for cleanroom and food-safe environments, among other features.

FANUC America Corp.
FANUC America Corp. is a subsidiary of FANUC Corp. in Japan, and it provides computer numerical control systems, robotics, and factory automation. The unit said its technologies and expertise help...