Farm Robots Could Lead to a Utopian—or Dystopian—Future, Argues Researcher

The scale of deployment, size of robots, and types of crops are as important as the technologies used, says Thomas Daum. 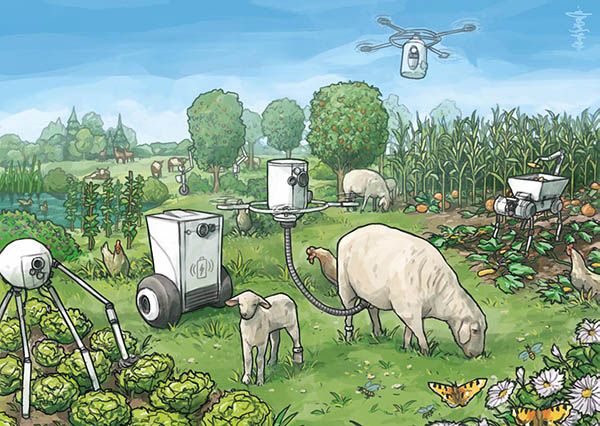 No longer science fiction, farm robots are already here—and they have created two possible extremes for the future of agriculture and its impacts on the environment, argued agricultural economist Thomas Daum in a ”Science & Society” article published this week in the journal Trends in Ecology & Evolution. One is a utopia, where fleets of small, intelligent robots farm in harmony with nature to produce diverse, organic crops. The other is a dystopia in which large, tractor-like robots subdue the landscape through heavy machinery and artificial chemicals.

Daum described the utopian scenario as a mosaic of rich, green fields, streams, and wild flora and fauna, where fleets of small agricultural robots fueled by sustainable energy flit around the fields, their whirrs intermixed with insect chirps and birdsong.

“It's like a Garden of Eden,” wrote Daum, a research fellow at the University of Hohenheim in Germany studying agricultural development strategies. “Small robots could help conserve biodiversity and combat climate change in ways that were not possible before.”

He suggested that the utopian scenario, which is too labor-intensive for conventional farming but is possible with robots working 24/7, would likely benefit the environment in numerous ways. Plants would be more diverse and the soil would be more nutrient-rich, Daum asserted.

Thanks to micro-spraying of biopesticides and laser weed removal, nearby water, insect populations, and soil bacteria would also be healthier, he said in the journal. Organic crop yields—which are currently often lower than conventional crop yields—would be higher, and farming's environmental footprint would be significantly reduced.

Agricultural robot yield only as good as plans

However, a parallel future with negative environmental ramifications is just as possible, noted Daum. In that scenario, he said, big but technologically crude robots would bulldoze the natural landscape, and a few monoculture crops would dominate the terrain. Large fences could isolate people, farms, and wildlife from one another.

With humans removed from the farms, agrochemicals and pesticides may be more broadly used. The ultimate objectives would be structure and control: qualities that these simpler robots thrive in but would likely have harmful effects on the environment.

While Daum stated that the future is unlikely to be confined to either a pure utopia or a pure dystopia, these two scenarios are intended to spark conversation at what he sees as a crossroads moment in time.

“The utopia and dystopia are both possible from a technological perspective. But without the right guardrails on policy, we may end up in the dystopia without wanting to if we don't discuss this now,” said Daum.

But these impacts aren't limited to just the environment—normal people are affected, too, he said.

“Robot farming may also concretely affect you as a consumer,” Daum said. “In the utopia, we aren't just producing cereal crops—we have lots of fruits and vegetables whose relative prices would fall, so a healthier diet would become more affordable.”

The small robots described in Daum's utopian scenario would also be more feasible for small-scale farmers, who could more easily afford them or share them through Uber-like services.

In contrast, Daum argued that the family farm is less likely to survive in the dystopian scenario. Only major manufacturers would be able to manage the vast swaths of land and high costs of large machinery, he claimed. 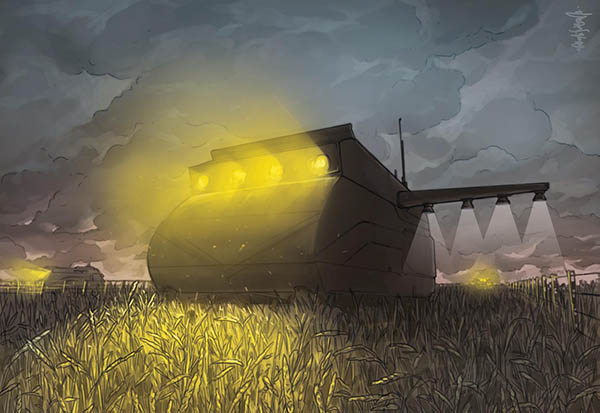 In parts of Europe, Asia, and Africa, where there are currently many smaller farms, there are clear benefits of making a conscious effort to achieve the utopian scenario. The situation is more challenging in countries like the U.S., Russia, or Brazil, which historically have been dominated by large-scale farms producing high-volume, low-value grains and oilseeds. There, small robots—which perform less efficiently on energy-intensive tasks like threshing corn—may not always be the most economically effective option, Daum said.

“While it is true that the preconditions for small robots are more challenging in these areas, even with large robots —or a mix between small and large —we can take steps towards the utopia with practices such as intercropping, having hedgerows, agroforestry, and moving away from larger farms to smaller plots of land owned by large farmers,” he said. “Some such practices may even pay off for farmers once robots can do the job, as previously uneconomic practices become profitable.”

To do so requires action now, Daum said. While some aspects of the utopian scenario like laser weeding have already been developed and are ready to be distributed widely, funding must go toward other aspects of machine learning and artificial intelligence in order to develop robots intelligent enough to adapt to complex, unstructured farm systems.

Policy changes are also necessary and could take the form of subsidies, regulations, or taxes, he said.

“In the European Union, for example, farmers get money when they do certain landscape services like having a lot of trees or rivers on their farms,” said Daum.

While it may seem like the dystopia scenario is more likely, it's not the only path forward. “I think the utopia is achievable,” Daum said. “It won't be as easy as the dystopia, but it's very much possible.”

Daum's work was supported by the Program of Accompanying Research for Agricultural Innovation, which is funded by the German Federal Ministry of Economic Cooperation and Development (BMZ).