Formic says it will use the $26.5 million in funding to expand its operations and support rapid deployment. 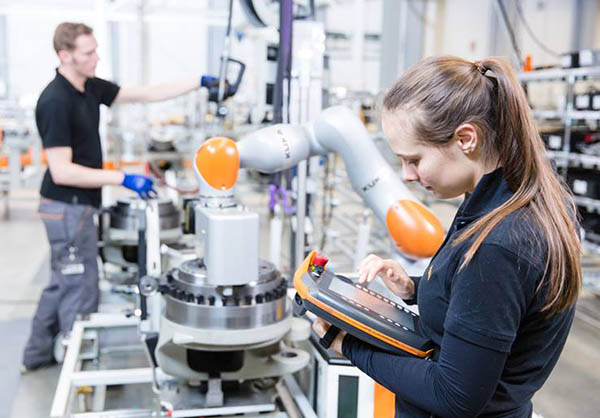 Given growing awareness of the benefits of automation, why haven't more businesses adopted robots? Overcoming complex and expensive deployments can help. Formic Technologies Inc. today said it has raised $26.5 million in Series A funding, as well as $100 million of debt capital to fund equipment purchases. The Chicago-based company said it plans to use the financing to expand its operations and support the rapid deployment of its offering for U.S. manufacturers.

“We came to the conclusion that what manufacturers needed was not any specific new technology, but a better way to access the technology that would best meet their needs,” said Saman Farid, co-founder and CEO of Formic Technologies. “Formic offers that access at a fraction of the cost or energy, as we take on the heavy lifting.”

Founded in 2020, Formic claimed that it is “a one-stop shop for automation.” The company said its robotics-as-a-service (RaaS) offering delivers customized robots at a low hourly rate with no money upfront and guaranteed uptime. Formic said its full “turnkey” service includes everything from planning and deployment to maintenance with no risk.

“We started with the assumption that small and midsize enterprises would benefit the most from automation, but very large companies have the exact same challenge,” Farid told Robotics 24/7. “Corporate headquarters have budgeted $5 million to $10 million for plant automation but don't use it because of the complexity and capital investment. Deployment often involves huge operational overhead and bandwidth.”

U.S. manufacturers have struggled during the pandemic with chronic labor shortages, supply chain issues, and global price competition, said Formic Technologies. The company said it has enabled manufacturers to increase their production and the utilization of their facilities and assets. As a result, they can offer better prices and increase profits, it said.

The company added that it can reduce the complexity and cost of automation by owning, programming, installing and maintaining robots at its own cost. Formic said its model is unique in that customers do not pay until the system is deployed and fully operational.

“We try to do projects that are relatively modular and don't require the redesign of the whole production line,” Farid said. “The No. 1 thing to automate is any task that's fairly repetitive. We can handle five to 100 parts, but we don't focus on a very high part mix.”

According to Farid, an engineer and robotics technology investor who founded Formic with former Universal Robots salesperson Misa Ikhechi, a unique combination of products and services make Formic’s model possible:

Lux Capital led Formic's Series A round, which brings the company's valuation to more than $100 million. Other strategic investors included Initialized Capital, Correlation Ventures, Lorimer Ventures, and One Planet VC.

“Formic’s model of on-demand robotics is right-sizing automation for customers across all areas of manufacturing,” said Shahin Farshchi, a partner at Lux Capital. “With the current challenges of the labor market and supply chain, the adaptability that Formic brings to the table is addressing a user area that longtime integrators haven’t.”

New York-based Lux Capital has more than $4 billion in seed and early-stage technology ventures under management. It was an early investor in companies including Auris Surgical, Desktop Medical, Matterport, Zoox, and Aeva.

“We’re excited to continue partnering with Formic as they change the face of manufacturing,” said Garry Tan, managing partner at Initialized Capital. “Robots as a service is accelerating the robotic revolution by years and lets U.S. manufacturers buy outcomes instead of having to take tech, integration, and financing risk themselves.”

“We know these are some of the most high risk-reward ratios that exist in the world with high IRRs [internal rates of return],” Tan said. “Formic makes it a no-brainer for thousands of factories and manufacturers.”

Initialized Capital is an early-stage venture firm that has invested in companies such as Coinbase, Instacart, Flexport, and Cruise. The firm said its portfolio—which spans over six core funds—is worth more than $100 billion, and more than 20 companies are valued at $1 billion or more.

“The big distinction between rentals and RaaS is that in the early days of software as a service, you'd also have to pay for servers, license fees, and then customization and maintenance,” Farid noted. “Companies just want the outcome, and our customers can testify to the fact that their lives are significantly easier with Formic owning and maintaining the systems than buying their own pieces of equipment or developing their own fleet management tools.”

Concurrent with its financing, Formic Technologies has expanded its board of directors and management team with leaders experienced in scaling high-growth businesses. Lux Capital’s Farshchi has joined Formic’s board.

Before founding Formic, Farid was a founding partner of Baidu Ventures, a $600 million technology venture capital fund. He also founded Comet Labs, an early-stage artificial intelligence and robotics incubator and investment fund. Across his investment career, Farid has invested and sat on the boards of more than 30 AI and robotics companies. He has observed numerous trends in robotics.

“Over time, we're seeing integrators specialize into different verticals, and we're trying to abstract more workforce complexities for factories,” Farid said. “As for interoperability and using human language to tell robots what to do, we're excited by the prospect, and a lot of people are working on these problems. We'll happily use such software as soon as it's ready, but if not, we'll build it ourselves.”

Formic noted that its customers include Polar Manufacturing, a 105-year-old maker of custom door and truck body hardware for industrial applications, and Georgia Nut, a 75-year-old manufacturer of confections and nuts. Both chose Formic as their partner for their very first automation projects.

Robot Sales Boom in U.S. Manufacturing, Thanks to Strong Supplier Base, Finds Report
There are many robotics suppliers, integrators, and end users in the U.S., even if many industrial systems are made...