After more than a century in operation, Polar Manufacturing uses robotics-as-a-service model to save up to $77,000 per year. 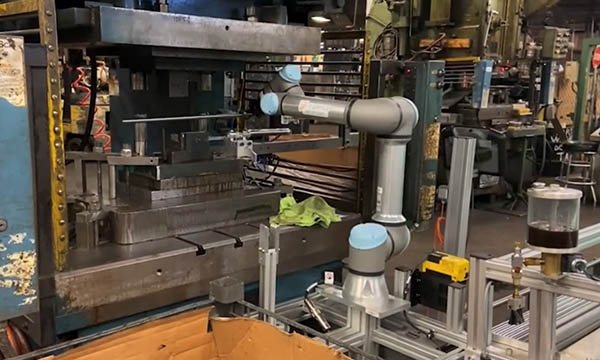 For robots to become more widespread, they must address customer pain points and be easy to use. Polar Hardware Manufacturing Co., which makes doors and truck bodies, has been in business for 105 years. For its first automation, the company turned to collaborative robots provided as a service by Formic Technologies Inc.

Like many manufacturers, Chicago-based Polar Hardware was struggling to meet its production goals and fill orders.

“If Polar didn’t automate, we would be out of business,” said Jose Figuerao, plant manager at Polar Hardware. ”We cannot compete if we cannot produce.”

Polar opens the door to robots

These difficulties led Polar Hardware to research its automation options. The company found Formic, which said its robotics-as-a-service (RaaS) offering delivers customized robots at a low hourly rate with no money upfront and guaranteed uptime.

Founded in 2020, Formic describes itself as “a one-stop shop for automation.” The Chicago-based RaaS provider said its full service includes everything from planning and deployment to maintenance, “all in an easy, no-risk fashion.”

Formic partnered with DesignHawk from Chicago to engineer a system that uses a URe cobot from Universal Robots A/S to automate Polar’s press brake application.

The URe-based machine-tending system can produce 750 parts in 10 hours, which will save Polar about $77,000 a year in labor costs. Polar can monitor performance from Formic’s platform, which delivers analytics in real time.

“It’s been very painless,” said Bob Albert, owner of Polar. “We like the company we chose. They don’t just set us up and walk away. And that to me is very key. They charge us by the hour for the machine, which is a very novel approach.”

“And if the machine’s not running, we aren’t paying for it,” he added. “So if something goes wrong, they’re going to be right over here to fix it.”

Under the RaaS offering, if Polar's system is not functioning, Formic guarantees that it will cover all of the engineering and costs to repair and maintain the system. In addition, Polar would not pay for the robots during any downtime.

After already seeing promising results, Polar has signed another contract with Formic to add a spot-welding robot into its facility. The company is also considering moving from a two-shift operation to a three-shift operation, allowing the cobots to run around the clock.

Altogether, with both systems up and running, Polar said it expects to save around $150,000 per year in operations costs.