Startup Formic says it can handle every aspect of financing and deployment to enable customers to save money and boost production. 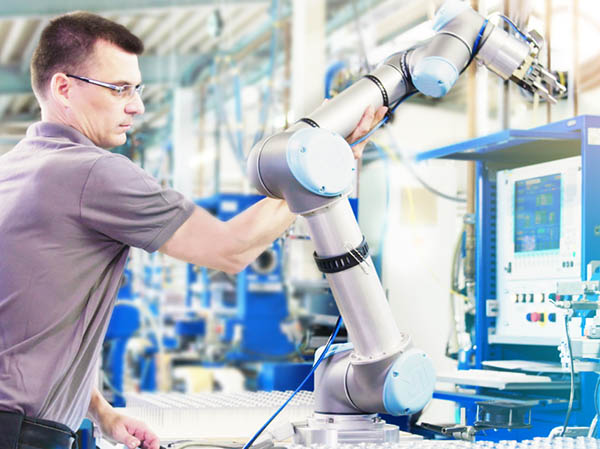 Cost and complexity are major barriers to the adoption of automation by small and midsize manufacturers. Vendors and systems integrators are increasingly offering robotics as a service, but there may still be financial risks. Formic Technologies Inc. has launched to offer customized robots at a low hourly rate, with guaranteed uptime and no upfront costs. The startup, which has an office in Chicago, said it can handle scoping, engineering, purchasing, implementation, and maintenance.

“We started Formic because we saw all that automation can do, and we wanted to provide a way for any manufacturer to easily adopt automation in a simple, risk-free, and on-demand way,” said Saman Farid, co-founder and CEO of Formic Technologies. “With Formic’s fundamentally different approach to financing and deployment, manufacturers can do more with automation without high costs or a lengthy and complicated purchasing and deployment process.”

The company said its model allows manufacturers to add automation without extensive in-house expertise, and its financing allows for rapid scaling. Formic said its deployments are 50% faster than traditional approaches.

“Problems for manufacturers include labor shortages, tighter margins, and more competition,” noted Malcolm Kerr, business operations and strategy lead at Formic. “In the past five years, 83% manufacturers planned to invested in automation, and 10,000 baby boomers are retiring every day. As many as 2.4 million manufacturing positions could go unfilled by 2030, according to Delotte.”

“China has more robots than the next four countries combined,” Kerr told Robotics 24/7. “But why haven't more facilities automated? It's because of time, CAPEX [capital expenditures], lack of expertise, and production uncertainty. It's hard to justify robots if you don't know exactly what you'll be doing for the next few years. Companies prefer predictable OPEX [operating expenses] to the risk of unforeseen expenses. They don't have enough money or time to install new systems.”

“Also, the automation industry is misaligned,” he said. “Integrators are incentivized to sell equipment that's marked up, and they quote only system partners. Most financing locks in high lending rates, and OEMs want to sell as much equipment as they can.”

“We came to the conclusion that what manufacturers needed was not any specific new technology, but a better way to access the technology that would best meet their needs,” Farid said. “Formic offers that access at a fraction of the cost or energy, as we take on the heavy lifting.”

Founded in September 2020, Formic describes itself as “a one-stop shot for automation.” How is it different from other robotics-as-a-service (RaaS) providers?

“Those models still use the traditional way of deploying technology—at the end of that process, you find an integrator with allegiance to an OEM and the same billing model,” replied Kerr. “Formic is unique. We're a financing company mixed with an engineering company. We also do scoping and systems design before deployment. We bundle all of it, so it's not just a different way of paying for equipment.”

“We purchase, integrate, and maintain robots from top OEMs at scale,” he added. “No manufacturer wakes up thinking, 'I want this piece of equipment.' Whatever a company needs done—say, a certain number of picks per hour—if it doesn't do what you say it does, you pay nothing.”

“We abstract a lot of engineering complexity,” Farid said. “Because we own and operate equipment in lots of faciliites, we can move things around. Even it it costs more upfront, we can keep using it over a period of years. It's easier and cheaper to manage and maintain.”

“A lof of the systems we're working on are system-agnostic,” said Kerr. “We use third-party 3D scanning tools for measurements and surroundings, which takes the burden off of integrators. We also deploy edge devices that can capture analytics that can be put on a dashboard.”

“They flag us if something goes wrong—we have five layers of triage and maintenance to maximize uptime,” he said. “They include 24/7 remote monitoring and troubleshooting, fixing something on site, sending a problem to systems integrators, and for more extreme cases, figuring out what's covered and just replacing a broken part ASAP.”

“We offer systems at a low hourly rate with guaranteed performance and SLAs [service-level agreements],” Kerr explained. “We assume all the risk and abstract the financing.”

“The way our customers describe it, we have 'skin in the game,' compared with integrators that rent equipment,” said Farid. “We're still on the hook to pay for a conveyor or robot arm. We own and operate the equipment. You only pay us if and when it works. It's a completely different paradgim. A traditional integrator will charge you hourly, both for designing an implementation and again to fix it.”

With a financing-as-a-service model, Formic must deal with chief financial officers as well as chief technology officers.

“It's a lot to get the financing and engineering right,” Farid acknowledged. “We're building two businesses at the same time. Jack [Wagler], our vice president of finance, spent five years growing the asset finance group at Ernst & Young. Gary [Young, senior credit officer] did work with Caterpillar and Dell, so we have a lot of experience. We have a $100 million debt facility.”

“Formic's costs are predictable— we don't charge line items,” Kerr said. “We transition customers to an easy model. There's no CAPEX, and we're able to come in 42% below what facilites do today with manual labor.”

“We've built an instrument to make it as simple as possible,” he said. “We deal with hard and soft costs, deal terms, and desired hours or shifts per week to make the financing beneath easier.”

“Our team comes from systems integration, finance, and robotics,” Kerr said. “They have a broad knowledge of systems available from Universal Robots, FANUC, and others. Our in-house expertise covers 80% to 90% of the time, and then we'll defer to our network of integrators familiar with different solutions. We have more than 100 contractor partners.”

Some systems, such as mobile robots or pick-and-place systems, have required a lot of human intervention. How does Formic keep up with improving capabilities?

“I've spent the the past 10 to 15 years as a venture capitalist investing in robotics,” said Farid. “We've looked at the latest breakthroughs in machine learning, reinforcement learning, and hardware and software.”

“When we talk about new technology, not is it only more reliable, but it's also easier to deploy and manage,” Kerr said. “It's worth it for us to invest and manage in large scale.”

“We don't care which OEM a technology comes from, but we can eventually help new providers,” he added. “We're working with existing brands, but we're also a go-to-market channel for new technologies. We're also doing our own research and development on tools and systems to support customers and integrators.”

In addition to newer, more flexible robots and RaaS; Formic said it financing and engineering services could make automation accessible to more manufacturers.

“Our primary customers have 300 to 400 people,” said Farid. “A lot of metal fabrication, packaging, and machine shops could have one or two robots. Most factories in the U.S. are subcontractors.”

“We're also looking at food and beverage, as well as consumer packaged goods,” he said. “The majority of our customers have no robots or were burned in the past. They don't have the expertise or margins for big investments.”

“We're helping to make everything from incense to traffic cones,” Farid said. “We're starting in an area 200 to 300 miles around Chicago, plus South Carolina, Florida, and Georgia. We expect to be nationwide.”

“We have 15 full-time employees and will hire a few more sales and engineering staffers,” said Farid. “Once we raise Series A funding, we'll scale aggressively.”

“What I find compelling about this business is the ability to connect cutting-edge robotics from startups with the workloads of facilities that need technologies and don't have good ways to get it,” Kerr said. “There's often an inherent distrust of new equipment, and we're the ones assuming the risks for deployment. Our Series A funding will add fuel to the fire.”