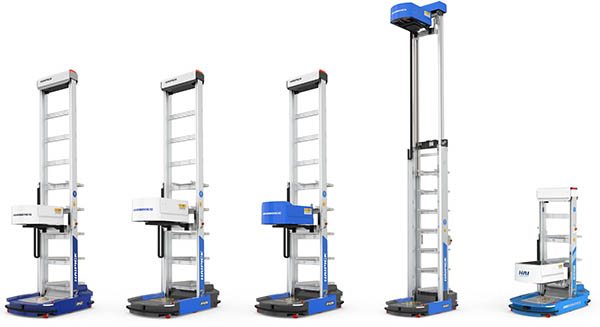 HAI Robotics, which has developed autonomous case-handling robots, yesterday announced that it has secured $200 million in Series C and D financing. The company said it plans to use the investment to make technical updates to its robot fleet, expand its global operation networks, and optimize its supply chain management and staff.

“Our major future orientation will center on expanding the overseas market and localize our service,” said Richie Chen, co-founder and CEO of HAI Robotics. He added that the Shenzhen, China-based company will continue to pursue technological innovation as the primary driver for growth and to continuously create value for customers.

Hai Robotics has more than 400 patents for core intellectual properties involving positioning, robot control, and warehouse management. It has also established subsidiaries in Hong Kong, Japan, Singapore, the U.S., and the Netherlands.

Even before the COVID-19 pandemic, the global supply chain and warehousing logistics market was turning to automation, noted HAI Robotics. The warehouse automation market could be worth $30 billion (U.S.) by 2026, experiencing a compound annual growth rate (CAGR) of 14% since 2019, estimated LogisticsIQ.

HAI Robotics said its HAIPICK robots can pick and place totes or cartons on storage shelves up to 5 to 7 m (16.4 to 22.9 ft.) high and are able to carry up to eight loads to continuously feed goods-to-person picking stations.

Unlike other mobile robots, the ACR is able to carry cartons as well as individual totes and to bring multiple cases to pickers or conveyors in one movement, said the startup. HAI Robotics said that warehouses can automate with its system in just a week, increase storage density by 80% to 130%, and improve human worker efficiency by three to four times.

Shoe and apparel companies were the first to use the HAIPICK system, said HAI Robotics. The company has been running more than 200 projects around the globe, with more than 2,000 ACR robots deployed, accounting for 90% share in the ACR robot market. It said it has partnered with dozens of global logistics and supply chain leaders.

HAI Robotics said it is competitive in project cost, technology, and customization capability. It said serving the demands of the Chinese market helped it mature, and the company recently deployed its first robots in Australia. HAI Robotics has also partnered with France-based Savoye to offer its systems to logistics companies in Europe.

In March, HAI Robotics announced B+ round funding of $15 million. The fast funding pace may offer a glimpse of the market's appraisal for its products, technological strength, and services, said the company.

“The case-handling robot is riding on the market trend that shifts towards smaller workflows, such as from pallet picking to totes picking,” said Guo Shanshan, a partner at Sequoia Capital China. “We're very pleased to see the company's fast growth with good innovation.”

Plus One Robotics CEO Reflects on Robotics Pickup in Second Half of 2021
Plus One Robotics, which provides vision-guided software for robotic picking, experienced rapid growth in the latter part of the year.