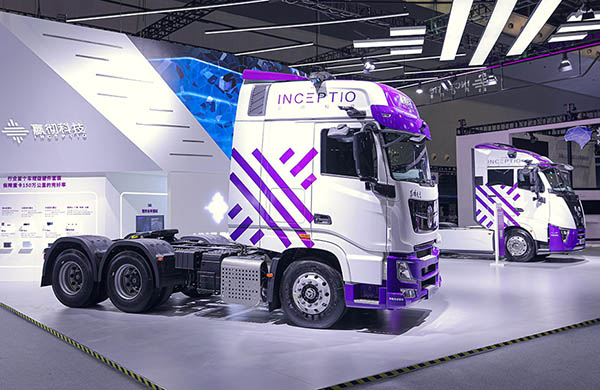 Inceptio Technology Co., which is developing and operating autonomous trucks, today announced that it has closed $270 million (U.S.) in Series B equity financing. The Shanghai, China-based company said it plans to use the funding to accelerate the development of its Xuanyuan autonomous driving system and its deployment in electrification.

“We will stick to full-stack independent development,” said Julian Ma, founder and CEO of Inceptio Technology.” Our goal is to speed up the mass production of vehicles, closed-loop business operations, and closed-loop data flows, because this is the fastest and most efficient way to achieve L4 autonomous trucks. We look forward to building Inceptio's nationwide autonomous freight service network and transforming 'sweat logistics' into 'smart logistics' in the near future.”

Founded in 2018, Inceptio has focused on SAE Level 3 and 4 self-driving technologies. It said it is working with automakers and logistics providers on a “new generation of TaaS (transportation as a service) that is a safer, more efficient, and more cost-effective freight network.”

Xuanyuan gets ready for mass production

The proprietary platform is also designed for energy efficiency and compatibility with multiple chips for configurations ranging from L2 to L4 autonomous driving. In addition, the system includes functional safety and cybersecurity measures, as well as control-by-wire chassis with an interface covering steering, braking, power train, and power supply.

Inxiptio released Xuanyuan in March and is testing trucks for safety in extreme temperatures. It said it expects that autonomous trucks will begin mass production by the end of 2021.

“With the L3 trucks rolling off the line by the end of the year, the system will have access to real-life autonomous driving data for tens of billions of kilometers traveled on roads,” said Dr. Ruigang Yang, chief technology officer of Inceptio Technology. “This will contribute to the system's faster iteration to L4 application and make itself a leading product in the industry.”

Last month, the company exhibited mass-produced vehicles from Dongfeng Commercial Vehicle and Sinotruk equipped with its full-stack Xuanyuan system at the World Artificial Intelligence Conference. Inciptio said L3 trucks could be upgraded over the air to L4 in the future.

At the conference, Inceptio also presented its hardware suite, including lidar, millimeter-wave radar, camera, GPS/inertial measurement units, computing platform, gateway, T-Box, and IVI-Box. The company said these components have passed strict engineering, development, and production certifications, as well as electrical, mechanical, environmental, and electromagnetic tests, so they should be reliable throughout a heavy-duty truck's lifecycle of 1.5 million km (932,000 mi.).

The company said its autonomous driving freight network has been embraced by a number of top-tier shippers and fleets in China.