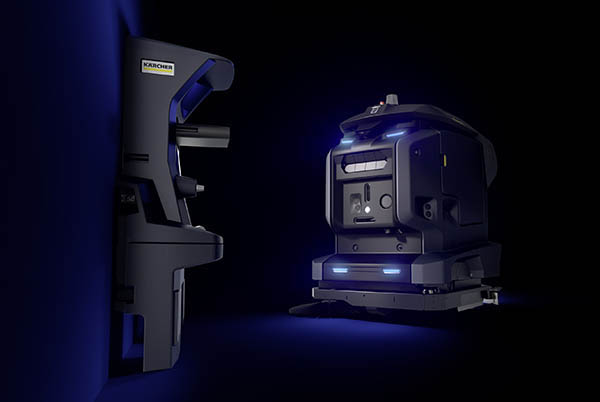 Kärcher
Kärcher's KIRA B 50 and charging dock, which can also recharge water and empty its waste bin.
By Eugene Demaitre
·

“Kärcher is meeting the industry need to automate in order to keep up with the demand for verifiably clean spaces,” said Marco Cardinale, vice president of floor care solutions and robotics at Kärcher. “The development of smart autonomous mobile robots like KIRA B 50 exemplifies our dedication to tackling these jobs. InOrbit is recognized as the leader in RobOps, and through this collaboration, we can jointly offer the most advanced and efficient solution to our customers.”

Winnenden, Germany-based Kärcher employs 14,400 people in 78 countries and 150 subsidiaries. The family-owned enterprise has operations in 78 countries and more than 50,000 service centers around the world. In 2021, Kärcher achieved the highest sales in its history with €3 billion ($3.2 billion U.S.).

“With floor scrubbers now cleaning places including warehouses, we extend those smarts to the cloud,” Florian Pestoni, co-founder and CEO of InOrbit, told Robotics 24/7.

“Advanced Incidents are like a programming language, following DevOps in the cloud,” explained Pestoni. “Kärcher defines its own incidents—such as if a battery level is low or an AMR is stuck. It can also create its own sophisticated rules by severity. That way, we're not trying to solve for every situation, but we can define, detect, and resolve.”

InOrbit said it extends the recently launched Configuration as Code support, a RobOps best practice. It added that its platform can ensure that any issues leading to degraded performance or service interruption can be identified, logged, and in many cases resolved through remote interventions.

Kärcher collaborates with InOrbit on KIRA B 50

Kärcher said the KIRA B 50 can efficiently execute cleaning missions with limited human intervention, thus freeing up people to carry out other tasks. From getting real-time data about individual robots, to managing the overall fleet efficiency through key performance indicators (KPI) and ensuring full autonomy through advanced remote support, InOrbit said it has allowed Kärcher to focus on its unique differentiators.

Pestoni noted that his company is strongly aligned with Kärcher on the strategic value of data and a shared vision around providing cleanliness as a service.

“Kärcher has created one of the smartest cleaning robots in the world,” he said. “InOrbit extends this intelligence to the cloud, augmenting what the robots can do on their own and enabling a complete view of robot operations at scale. InOrbit is helping Kärcher clean up.”

“Cleanliness in large areas is not just a 'nice to have,'” added Pestoni. “Custodial and janitorial work suffers from low retention, but with self-emptying, a single robot can help cover a larger space, leaving people to clean other, high-contact surfaces.”

“But it's not just about robots cleaning like a person; it's about verifiable cleanliness, like the signs listing times between cleanings in public restrooms,” he said. “Incidents can be reactive and proactive, as the system gets smarter over time.”

InOrbit will host a free webinar with the Kärcher team on June 1 to discuss the future of autonomous cleaning.

Kärcher
Kärcher's KIRA B 50 and charging dock, which can also recharge water and empty its waste bin.

Nala Robotics Showcases Robotic Dishwashing System
Spotless can be rented for $2,995 a month and was designed for use in professional kitchens.

Kärcher and InOrbit Recognized for Innovation, Partnership at Plug and Play Silicon Valley November Summit
Plug and Play will present Kärcher with Corporate Innovation Award and celebrate the partnership with InOrbit that it facilitated.