The dog days of summer may be upon us, but these autonomous systems were designed to help provide some relief. 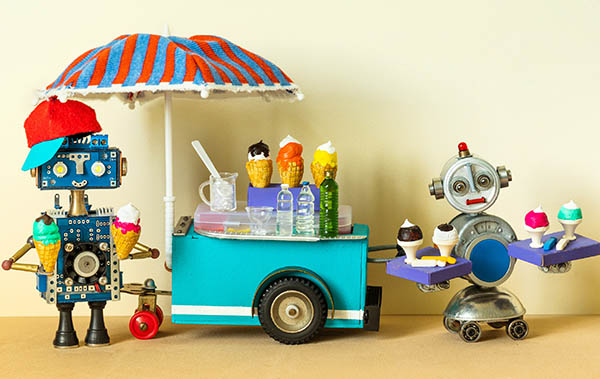 Getty Images
Ice cream may not yet be as popular as other foods for automation, but some companies are looking to disrupt the market.
By Cesareo Contreras
·

August will most likely bring some relief from the sweltering temperatures we faced this past month, but we at Robotics 24/7 thought it would be worthwhile to take a look at some companies developing ice cream-making robots. Is there anything better on a hot summer day than a couple of scoops of your favorite dessert?

While ice cream-making robots aren't as popular as pizza-making robots, there are still players trying to disrupt the space. There are humanoid robot ice cream servers, as well as ice cream cafes equipped with robot arms preparing and serving up dishes. They have begun popping up in malls around the globe and are expanding into new areas all the time.

Many of these robots not only prepare ice cream but also serve coffee, yogurt, sorbet, and gelato. These autonomous systems are a testament to the advancements being made in robotic precision and are an example of how robots are being used for more and more applications.

There’s a novelty seeing a robot prepare a food and beverage, but in many instances there are also human workers involved, whether that be directly interacting with customers or troubleshooting the robot where an error occurs.

The food and beverage robotic space is estimated to reach $4 billion by 2026, with an annual growth of 13.1%, according to Markets and Markets.

While much of that growth will come from the packaging of food on assembly lines, robots are also fast becoming chefs, baristas, and more.

The global robot service market is estimated to be worth $41 billion by 2027, at a compound annual growth rate of 15.9%, according to Fortune Business Insights.

Look at the slide show on the right (bottom on mobile) to see some interesting ice cream robot makers from around the world.

Getty Images
Ice cream may not yet be as popular as other foods for automation, but some companies are looking to disrupt the market.

Soft Robotics Uses NVIDIA Isaac Sim to Apply Automation to $8T Food Market
The company is using synthetic data and AI to accelerate its efforts to improve safety and increase productivity in food...

Danone Invests in 10 BAYLO Robotic Forklifts at France Plant
Danone is a major food distributor and said it chose BAYLO to automate the movement of pallets.