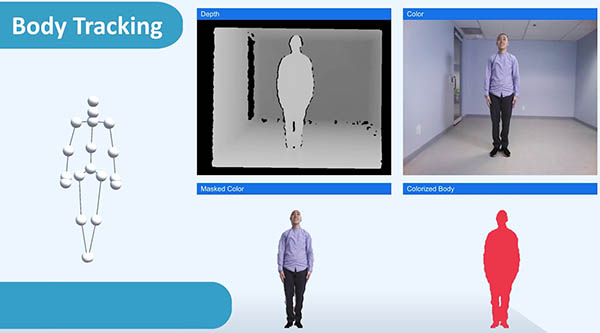 Orbbec
Orbbec says its Femto 3D camera is designed for indoor applications such as tracking human forms.
By Robotics 24/7 Staff
·

Robotics developers and integrators are getting more options for 3D perception. Orbbec today announced that it has begun shipping its Femto line of time-of-flight cameras, which can capture the exact position and shape of static or moving objects and scenes with high accuracy.

“Time-of-flight [ToF] technology has become one of the hottest and most exciting fields in 3D imaging,” noted David Chen, co-founder and chief technology officer of Orbbec. “ToF-based 3D cameras can measure shapes, movement, and position of static or moving objects with pinpoint accuracy. Our new Femto line gives users a range of state-of-the-art solutions and can do so in industrial quantities.”

The Troy, Mich.-based company said it is “dedicated to creating intelligent technologies for every human, everywhere.” Orbbec claimed that its 3D cameras are affordable and that its Orbbec Persee+ is “the world’s most advanced camera-computer.”

Orbbec described its Femto line as a new category of 3D imaging products. They are designed to give developers, engineers, researchers, and hobbyists the ability to customize ToF systems for their particular applications, it said.

The company said its new product line includes the following:

In addition, the lineup also provides depth engine-equipped cameras which release large volumes of computing power to the host PC—a feature many ToF cameras do not currently provide, claimed the company.

Orbbec offers an SDK for its ToF cameras. Source: Orbbec

Unlike many other camera providers, Orbbec said it is an integrated design, build, and manufacturing company. It said it is capable of ensuring delivery of cameras at at any volume, from very small to million-plus quantities, with variable pricing available.

Orbbec offers its products to designers in healthcare, warehousing and shipping, autonomous mobile robots, and augmented reality, along with hundreds of other applications.