Robot Orders in North America for Q2 Increase 67% Year Over Year, Reports A3

Association for Advancing Automation statistics show that manufacturing and other industries are getting back to business with robotics. 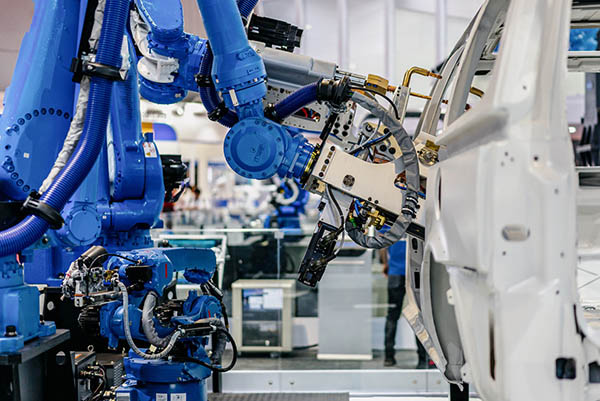 Association for Advancing Automation
North American companies ordered 9.853 robots worth $501 million in the second quarter, reports A3.
By Eugene Demaitre
·

As businesses get back to work after pandemic-induced pauses, more and more are turning to automation for help. In the second quarter, robot orders increased by 67% over the same period last year, said the Association for Advancing Automation yesterday.

North American companies ordered 9,853 robots worth a total of $501 million in Q2 2021, up from 5,196 sold during the early peak of the COVID-19 pandemic in Q2 2020, according to the Association for Advancing Automation (A3). Last quarter's increase marks the third-highest quarter on record for robot units sold overall, added the Ann Arbor, Mich.-based organization.

“With the big increases in automation sales, and favorable economic conditions in U.S. manufacturing sector throughout much of 2021, it’s clear users have accelerated their orders for robotics and other forms of advanced technologies,” stated Jeff Burnstein, president of A3. “By automating—either for the first time or expanding on how they use automation—companies will be better prepared to handle any upcoming issues that impact their business.”

“The pandemic acted as an accelerant,” he told Robotics 24/7. “From the difficulty in bringing people in to work to the difficulty of finding people to work, it jumped out. The labor shortage is real, and it is forcing companies to automate.”

In addition, more than half of Q2 2021 orders (5,530) came from non-automotive customers in industries such as metals, electronics, food, and healthcare. A3 said this reflects the increasing recognition of the potential benefits of automation across sectors.

“This was on par with our expectations,” said Burnstein. “With demand accelerating in every industry, we're not surprised at the strength in numbers. While this may not continue going up at that rate forever, exposure to general non-automotive industry—which is as large or larger than the automotive space—is encouraging for the long term.”

According to A3, the most substantial increases in robot orders in Q2 came from companies in the following segments:

In addition to the large increase in robotic orders, machine vision, motion control, and motor markets had record increases over Q2 2020, reported A3. The North American machine vision market expanded 26% to $764 million, a new record. 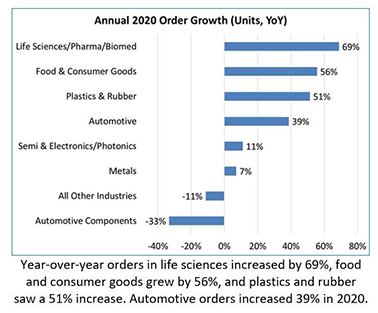 For January through June of 2021, the North American machine vision market grew 18% to $1.5 billion, which is the best start to a year on record, A3 said.

The motion control and motors sector recorded $1.065 billion in shipments, 13% greater than Q2 2020 sales and setting another record. Motors, actuators, and mechanical systems and electronic drives saw the largest increases.

“This is all part of the same trend, as technology improves and new spaces emerge,” Burnstein said. “Five years ago, the logistics space wasn't as big as it is now, and mobile robots are not yet part of our numbers.”

What about collaborative robots? “Cobots may not be getting as much attention as they should be because of the recent focus on AMRs [autonomous mobile robots],” Burnstein said. “But they contuinue to grow as traditional robot makers like ABB, FANUC, KUKA, and Yaskawa become active in that space.”

Both increasing demand and improving technologies have led to numerous partnerships and company fundings.

“Consolidation will likely continue,” said Burnstein. “There's so much money invested in robotics now, which is a sea change from five to 10 years ago, when nobody was investing in robotics hardware.”

“At last week's AMR and Logistics Conference, we saw Cascadia Capital, Cambridge Consultants, and others looking for opportunities,” he said. “There will be lots more startups and mergers and acquisitions to come.”

A3 also counts integrators among its members. How important is their role as robotics usage grows?

“As you look at more industries starting to automate, they'll need assistance,” Burnstein replied. “Most companies don't have the resources to put in all of these technologies together, so integrators will continue to play a key role.”

“The revitalization of automation we’re seeing across myriad industries is extremely encouraging,” Burnstein added. “Not only will the increase in automation use be a win for our member companies, but it will also help the U.S. economy grow even more as customers increase productivity and fill the millions of manufacturing jobs that remain unfulfilled.”

Omron Automation Launches Proof of Concept Center in Michigan
Omron says its new center will provide customers with a low-risk approach to validating systems against cost, safety, and quality...

Q3 Robot Sales of $1.48B Put 2021 on Track for Biggest Year Yet, Says A3
North American orders of robots so far this year have already surpassed the previous nine-month record set in 2017, reports A3.

ARM Institute Opens Fellowship Applications With the AIM Higher Consortium
Fellowship will award $60,000 to an innovator in the Pittsburgh-West Virginia-Youngstown, Ohio region for advancing U.S. manufacturing with robotics.

10 Industrial and Service Robotics Trends in the IFR’s World Robotics 2021 Report
The International Federation of Robotics has released its annual report on global robotics shipments from 2020, and it expects strong growth...
More Manufacturing