There are many robotics suppliers, integrators, and end users in the U.S., even if many industrial systems are made overseas. 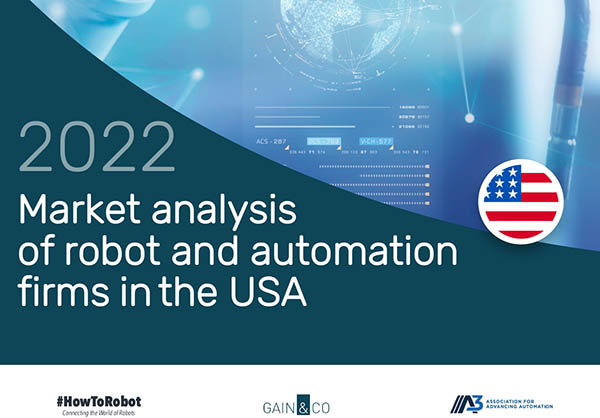 HowToRobot
HowToRobot, Gain & Co., and the Association for Advancing Automation have released a report on robotics in U.S. manufacturing.
By Robotics 24/7 Staff
·

A strong supplier base has sparked a recent robot sales and use boom within U.S. manufacturing, according to a new report from HowToRobot, Gain & Co, and the Association for Advancing Automation. Last year, 39,708 robots were sold in North America, an increase of 28% over 2020, said the report. It noted that robot suppliers and integrators have demonstrated successful implementations across the U.S.

“What makes robotics companies in the U.S. unique is their ability to take existing technologies from across the globe and adapt them to real-life manufacturing needs,” stated Søren Peters, group CEO of HowToRobot and Gain & Co. “This is particularly useful in the current situation, where automation is urgently needed.”

HowToRobot provides a platform for matching robot suppliers with buyers. The Frederiksberg, Denmark-based company provides global market insights and a range of online tools for buyers to explore their automation options and access to more than 15,000 suppliers globally.

Gain & Co. is a vendor-independent advisory firm that works with Fortune 500 companies and other businesses globally. The Odense, Denmark-based firm said it helps them outline their automation strategy, plan investments, source robotic systems, oversee implementation, and review their performance.

The U.S. has a high share of systems integrators covering the market, reported HowToRobot and the Association for Advancing Automation (A3). It found that 69% of the 1,187 robot suppliers in the U.S. are integrators, or companies that sell and often implement automation but typically do not manufacture the robots themselves. This is a relatively high share of integrators compared with the average of 45% across 19 other countries studied by HowToRobot.

In addition, 12% of the suppliers based in the U.S. make robots, said the report.

“Robotics technology is transforming the way business is done across a wide variety of industries, from mature segments like automotive to relatively new areas like retail, construction, and agriculture,” said Alex Shikany, vice president of A3. “Companies of all sizes are realizing at record rates that robotics and related automation technologies increase productivity, provide better working environments and career opportunities for employees, and are a necessity to compete on the world stage.”

Robot sales pick up across a range of industries

Robot usage in North America becoming more mainstream, as new sectors begin adopting automation, said the report. 2021 was also the second year in a row that non-automotive robot sales overtook those from the automotive industry, which has traditionally been the largest purchaser of robots.

Non-automotive orders now represent 58% of the North American total, said A3. Unit sales to non-automotive industries saw the following increases in 2021 over 2020:

While U.S. integrators and users are adopting more robots, most of them are manufactured in other countries, said the study. Of the top 16 brands analyzed, all of them came from outside the U.S. (Collaborative robot leader Universal Robots and mobile platform provider Mobile Industrial Robots are both Danish, but they are now owned by Boston-based Teradyne Inc.)

The report also found that most robot suppliers are based in the Midwest, with 47% of the 1,906 supplier offices in the U.S. based in that region.

Despite other industries picking up on automation, the metal and machinery plus automotive sectors remain the primary focus of most U.S.-based robot sales, with 50% and 46% of suppliers serving these two sectors, respectively.

The most popular application specializations among U.S. robot suppliers were handling and picking (69% of suppliers), assembly (45%), inspection and quality assurance (32%), machine tending (29%), and welding (27%).

Many of the companies and technologies mentioned in the report will be on full display at the Automate Show in Detroit from June 6 to 9, 2022. Registration is free and available now.

HowToRobot
HowToRobot, Gain & Co., and the Association for Advancing Automation have released a report on robotics in U.S. manufacturing.