UR20 to be Displayed for First Time in U.S. at Universal Robots’ IMTS Booth

The company said the cobot features a new design that prioritizes torque and speed. 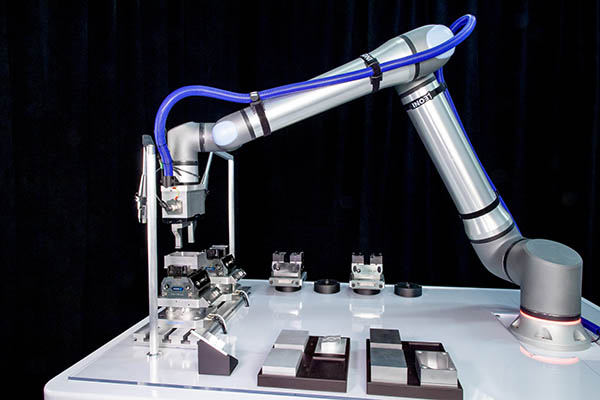 Universal Robots A/S will be showcasing its UR20 cobot arm for the first time in the U.S. during the International Manufacturing Technology Trade Show later this month in Chicago.

“More than half of all U.S. manufacturing tasks are automatable, a fact that businesses start to realize as they simply cannot fill open positions,” stated Joe Campbell, senior manager of applications development and strategic marketing at Universal Robots. “We are launching a redefined cobot that has been completely re-engineered from the ground up, focused on freeing up more manpower within a wide range of human-scale automation tasks.”

Universal Robots said the UR20 will be “loading and unloading workpieces into a machine fixture requiring a long reach” at its booth.

The company said it re-engineered the cobot’s joint to deliver 30% more speed and torque within a closed capsule. In fact, the UR20’s base joint can produce 700 Newton-meters of torque, noted Anders Beck, vice president of innovation and strategy at Universal Robots.

“This is more than a performance model Tesla produces on all of its wheels,” he said in a statement. “Even with the increase in reach and torque, we’ve managed to retain the cobot’s 50 microns repeatability, while using standard single-phase power.”

Universal Robots' technology will also be on display at other exhibits on the show floor.

“Our cobots will be in more than 20 other booths at the show as well, each showcasing different ways to incorporate cobots into machining applications,” said Campbell. “We’re looking forward to meet every IMTS attendee, no matter where they’re at in their automation journey.”

Universal Robots said it has seen a 30% growth across the first two quarters of 2022 when compared with the first half of 2021. It attributed its success, in part, to its partners.

“A significant contributor to UR’s growth is OEMs that now increasingly incorporate UR cobots into full solutions, a sales channel that grew 39% year-over-year,” the company stated. “At IMTS, UR has invited several OEM and UR+ partners to its booth, including Vectis Automation, Hirebotics, VersaBuilt Robotics, Robotiq, Kane Robotics, PCC Robotics, and Mid Atlantic Machinery.”

At IMTS, Universal Robots will be located at Booth 236949. The event will take place from Sept. 12 to 17 at the McCormick Place.

Flexiv Robots Perform COVID Tests and Massages at World Artificial Intelligence Conference
This was the first time the company has shown its robot arms completing these tasks.

UR20 to be Displayed for First Time in U.S. at Universal Robots’ IMTS Booth
The company said the cobot features a new design that prioritizes torque and speed.

New Scale Robotics Work Cells Deployed at Workforce Center at College in New York
The educational kits include a collaborative robot, hardware, and course materials for hands-on training in robotics and automated metrology for...

How to Set Up Cobot Cells for Efficient De-Palletization
Considering integrating a cobot in the de-palletization operation? Keep in mind these steps.
More Cobots

Schunk
The company was founded in 1945 by Friedrich Schunk as a mechanical workshop, and has developed under the leadership of Heinz-Dieter Schunk to a competence and world market leader for clamping technology and gripping systems. Today, the company is run by the third generation siblings Henrik A. Schunk...