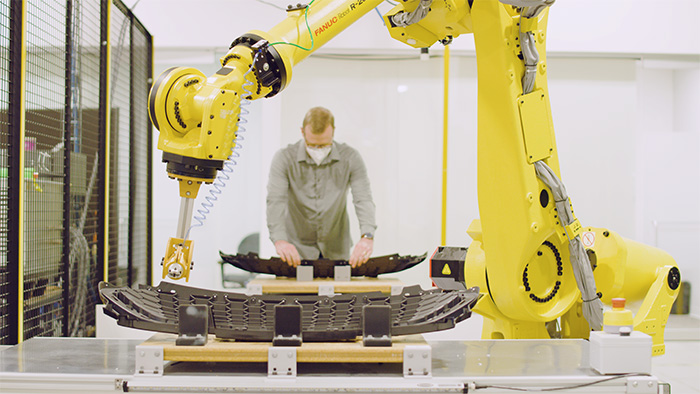 Veo Robotics
FreeMove is designed to enable industrial robots to work at speed but slow down for safety around humans.
By Eugene Demaitre
·

Veo Robotics Inc. today announced that its flagship FreeMove product, which is designed to make industrial automation responsive to people, has received safety certification from TÜV Rheinland. The Waltham, Mass.-based company said it is the first of its kind for human-robot collaboration.

Veo applies advanced computer vision and 3D sensing to enable industrial robots to perceive and respond to their surroundings. The company said its proprietary hardware and software can improve safety and enable manufacturers to build more flexible and efficient production lines.

FreeMove is the only industrial robot safeguarding system on the market that implements dynamic, 3D speed and separation monitoring and has been certified for compliance with ISO 13849 for PLd, Category 3, said Veo.

“Certification is a huge deal for us,” said Patrick Sobalvarro, president and CEO of Veo Robotics. “It has taken us four years to get the vision algorithms, rule-based competiton, provability, health monitoring, and redundancy in line. Testing and finding semiconductors during the pandemic was a challenge.”

“It's not possible to test every single failure mode—it would take thousands of tries,” he told Robotics 24/7 during a site visit last week. “Fortunately, we know from our staffers with medical and avionics experience about the FMEDA [Failure Modes Effects and Diagnostics Analysis] tool from exida.”

“We had to identify every electrical component and piece of software and provide documentation so that integrators can be assured our part of their systems is safe,” Sobalvarro said. “We had to learn as a company about quality and validation, and you don't see every startup take that journey.” 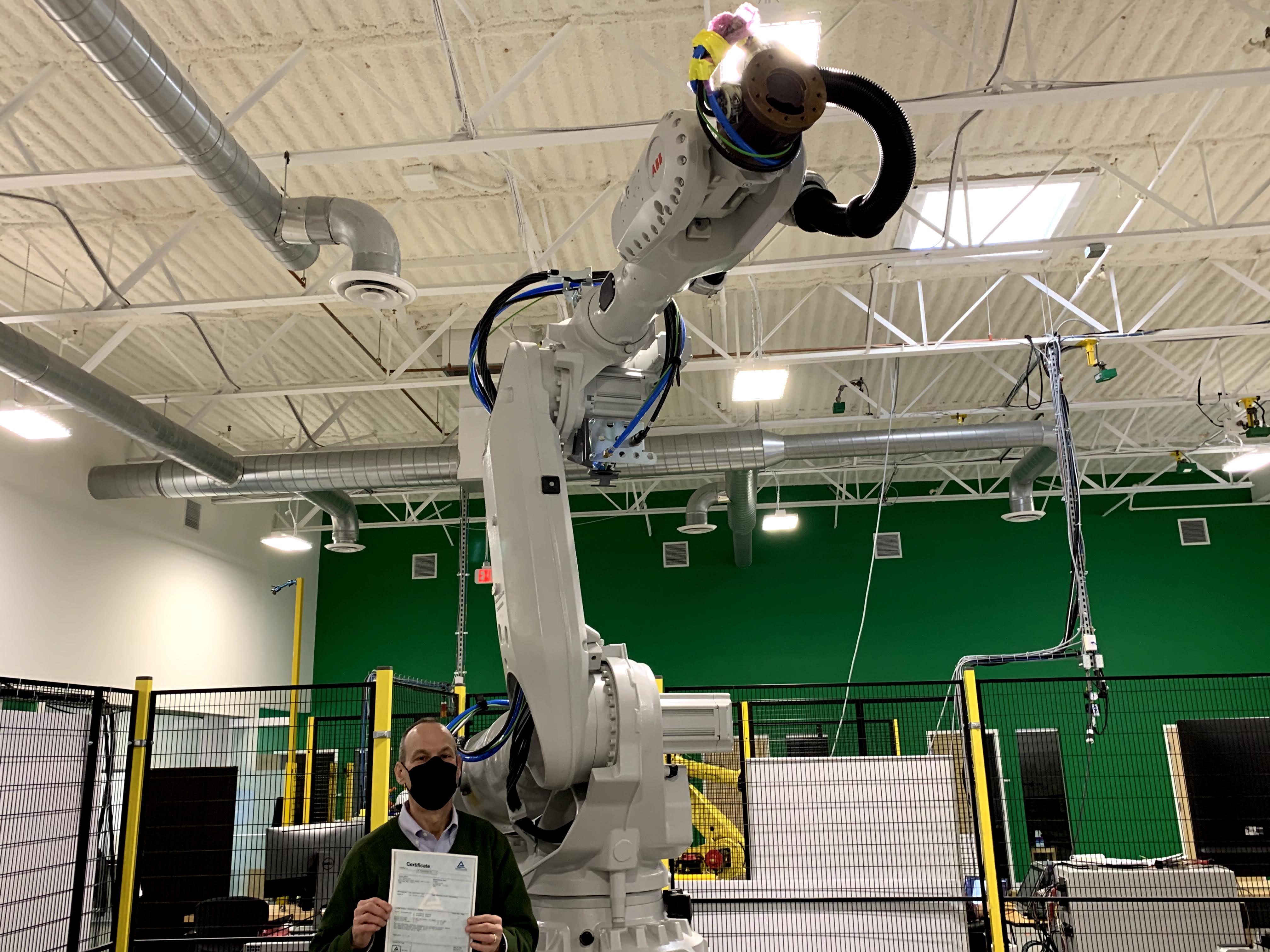 “The problem with smaller PFL [power- and force-limited] robot arms is that they're not fast or precise enough for industrial applications,” said Sobalvarro, referring to many collaborative robots, or cobots. “If it has to work for 1 million cycles with minimal intervention, we can bridge that gap.”

“Alberto Moel [Veo's vice president of strategy and partnerships] has blogged about palletizing with PFLs compared with an ABB industrial robot,” he added. “There are some applications where a cobot is appropriate, such as a UR10 in a cherry picker. We do dynamic speed and separation.”

“PLCs [programmable logic controllers] still use ladder logic, so application engineers have to do all the work themselves,” Sobalvarro said. “We make it easier for them.” 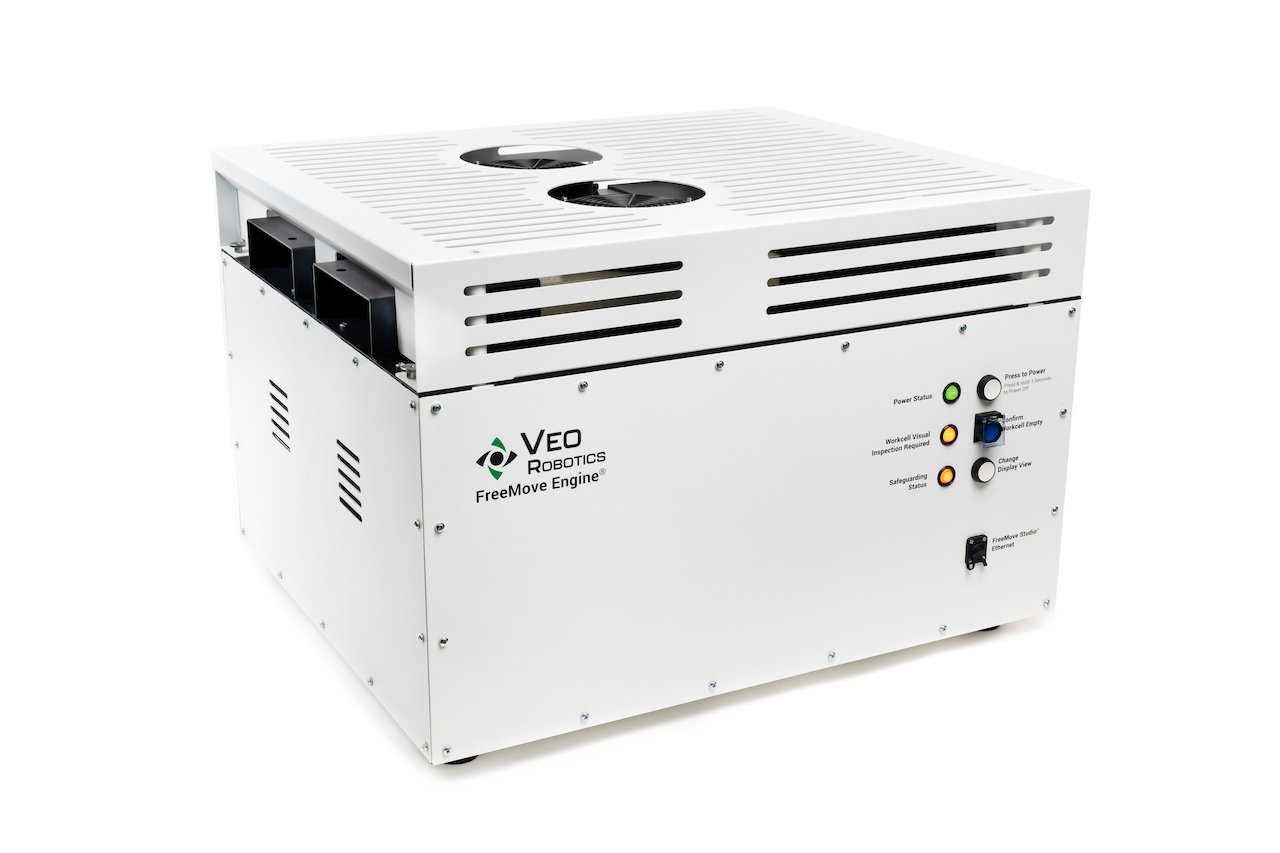 The FreeMove engine is designed to bring compute to the shop floor. Source: Veo Robotics

FreeMove takes on the hardware and software complexity for the distribution center, Sobalvarro said.

“There has never been a box on the factory floor with as much compute as our box,” he said. “We can update our software and recalibrate sensors easily, unlike light curtains or PLCs. Our computing engine will have Version 1.1 in July and Version 1.2 in November, depending on maintenance reviews.”

“We get asked a lot for 3D data, because with two optical paths, we can reject data for a cleaner image,” noted Sobalvarro. “We cover the entire workspace, so the data can also be used for grasping or detecting the absence of product.”

“The system is almost completely sealed, and cooling is a serious concern, since it is designed to run from 0º to 40ºC,” he explained.

Veo is working with robots from the major vendors—ABB, FANUC, KUKA, and Yaskawa. “We're making investors in Silicon Valley understand that engineering talent isn't limited to the coasts and that robotics is different from Web applications,” said Sobalvarro.

“Integrators told us three years ago, 'Call us when you're a few months from certification,'” he recalled. “Now we have a certified integrator program.” 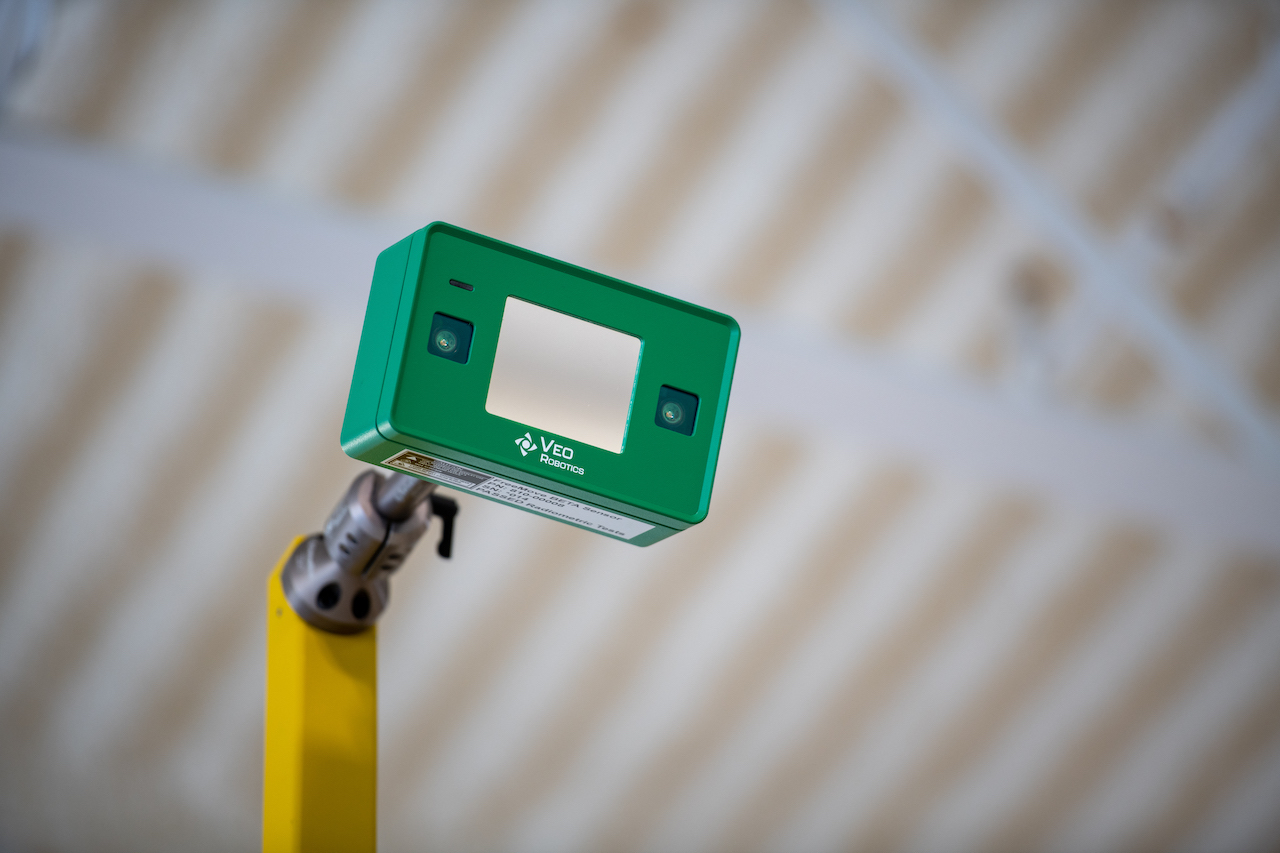 “Veo Robotics’ FreeMove is a first-of-its-kind safeguarding system that fills a need in the industrial robotics industry,” said Mark Ligler, vice president of sales at FAS. “We are excited to partner with Veo and offer FreeMove as part of our safety solution.”

“As Joe Gemma [global vice president of sales and marketing at Calvary Robotics] has said, 'There are no cobots; only collaborative applications,'” Sobalvarro said. “We've already installed FreeMove at an automotive supplier in Detroit, and aviation, logistics, electronics, and other industries are next. We want to work with integrators that can best help us scale.”

“We've received interest from consumer packaged goods and electronics businesses, as well as in logistics and distribution-center applications,” said Sobalvarro. “For example, big robots for picking and loading pallets from conveyors can have quick recovery and be safer. Some food packaging and online retail customers already use industrial robots for speed.”

“Veo's ADK [application development kit] confirmed interest—every company that got it has ordered the final version of FreeMove,” he claimed. “We never sold one to a university lab or a CTO [chief technology officer] demo lab, which can be a distraction.”

“FreeMove can even work with robots its has never seen before,” Sobalvarro said. “We had a construction customer take the information for a FANUC 900, predict how it would move, and effectively safeguard that system.”

“We've also been pulled into non-robot applications because FreeMove can monitor other machines, such as presses, molds, and conveyors,” Sovalvarro said. “Our system has classification and can tell if a person has entered the work area. Light curtains and area scanners can't distinguish them from a piece of paper, a loose cable, or birds—they're very binary.”

Veo Robotics
FreeMove is designed to enable industrial robots to work at speed but slow down for safety around humans.

57% of Manufacturers Surveyed Say Robots Aren’t Taking Jobs, Finds Veo Robotics
More than half of manufacturers surveyed said they have turned to automation to augment human workforces, not replace them, but...