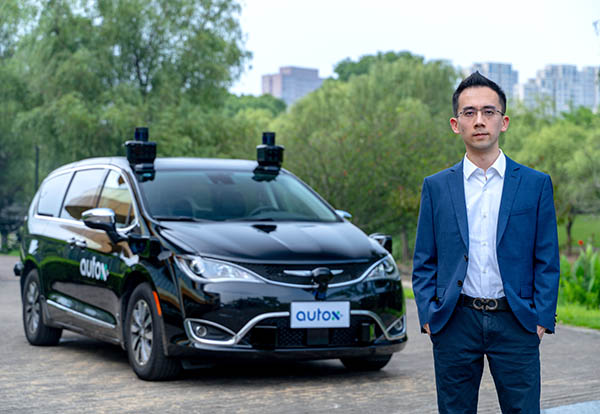 AutoX Inc., which said it is a leading developer of autonomous vehicles in China, today announced the start of production of its Gen5 system for fully driverless robotic taxicabs.

“Safety is our No. 1 priority, and it has to be built on a reliable foundation,” stated Dr. Jianxiong Xiao (a.k.a. “Professor X”), founder and CEO of AutoX, at an event at the Crowne Plaza Shanghai Anting. “Gen5 was created for fully driverless robotaxis in cities and is designed for the safety of our users and everyone on the road.”

Xiao, self-driving technologist who studied at the Massachusetts Institute of Technology and Princeton University, founded AutoX in 2016. The Shenzhen, China-based company said its mission is “to democratize autonomy and provide universal access to the transportation of people and goods.”

AutoX claimed that its self-driving platform is capable of handling the most challenging and dynamic traffic scenarios in urban areas around the world.

The Gen5 system has a total of 50 sensors, as well as a vehicle control unit of 2,200 TOPS (trillions of operations per second) of computing power. It includes 28 cameras capturing a total of 220 million pixels per second, six high-resolution lidars offering 15 million points per second, and 4D radar with 0.9-degree resolution encompassing 360 degrees around the vehicle.

Gen5 allows AutoX RoboTaxis to drive safely on China’s complex urban streets by detecting occluded delivery scooters behind vehicles from several hundreds of meters away. It added that the system’s higher-resolution sensing capability enables them to drive at higher speeds safely, extending the operational design domain of the company’s driverless fleet.

AutoX said it has built the Gen5 system with an electrical and electronic architecture that satisfies global functional safety standards. The company said that the Gen5 production process is established with strict supplier management and quality control on a modular and vehicle level.

AutoX said it it is the first and currently only company operating SAE Level 4 autonomous vehicles on public roads in China without safety drivers. It has deployed hundreds of driverless vehicles in Shanghai, Shenzhen, and other cities.

AutoX has eight offices and five research and development centers globally. It has raised $160.1 million in Series A financing to date. Top investors and strategic partners include Capital Today, FCA, Honda China, and more.

After six full months of operation with a perfect safety record, the company said it is moving forward with the production of its Gen5 system to expand its robotaxi fleet.