In addition, Stavros Vougioukas, an associate professor at the University of California, Davis, has joined Future Acres' advisory board. 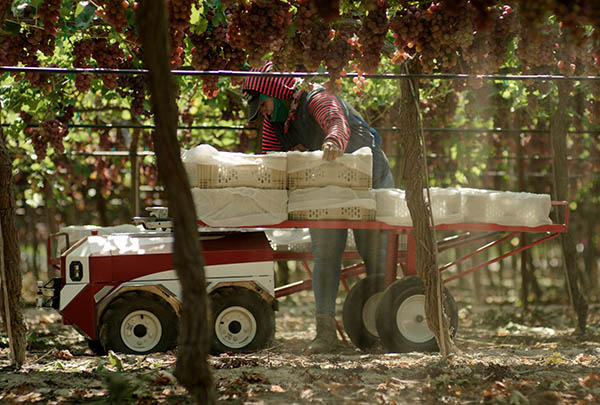 Future Acres and Sun World
The Carry robot is designed to help workers in vineyards.
By Eugene Demaitre
·

After years of development, agricultural robotics companies are reaping funding to grow, having raised more than $1 billion so far this year. Yesterday, Future Acres announced an agreement with Sun World International LLC to further develop and commercialize its robots with Sun World's 2,000 growers farming on 55,000 acres around the world.

“By 2050, the gloal population will be 10 billion, so farmers will need to increase production by 50% with the same amount of land while reducing emissions by 75%,” said Suma Reddy, CEO of Future Acres. “At the same time, farmers can't find people to do the work. It's exacerbated by an aging workforce and gross inefficiencies in how we harvest. Workers spend 30% of their time and energy transporting crops by wheelbarrow, which was invented in 231 C.E.”

“I was in the Peace Corps in Mali, where I got interested in agriculture and how to manage our resources,” Reddy told Robotics 24/7. “In India, I worked with microfinance and started to see applications of new technologies. After business school, I decided to focus on the intersection between agriculture and infrastructure with indoor forming and now agricultural robotics.”

While autonomous tractors are already being deployed around the world, different crops require smaller robots, she explained.

“If you look at the $45 billion specialty crops market, the cost of production is 3x that of row crops,” said Reddy. “The way farms are designed is completely different than for grains harvested with combines.”

“The other piece we saw in agricultural technology was a crowded space around fruit like apples and strawberries, but table grapes are a $1 billion industry in California, which has 99% of the U.S. market,” she noted. “We have a big vision but want to monetize quickly.” 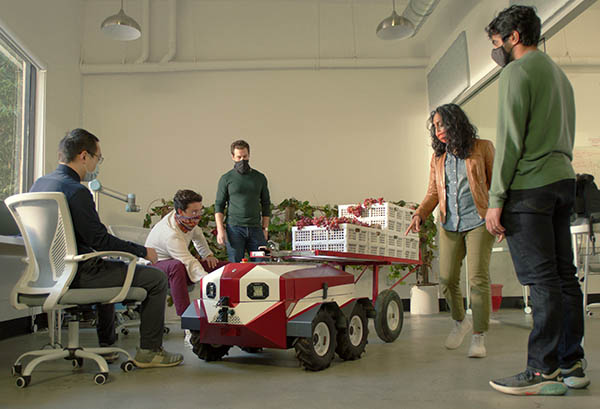 “We're excited about partnerships to accelerate, integrate, and build capabilities,” said Reddy. “Table grapes is still a very fragmented industry compared with other crops. Our challenge was developing a partnership with a centralized player.”

“Not only is Sun World a distributor; it's also a customer,” Reddy said. “We did a back-of-the-envelope calculation and saw a $144 million opportunity. Sun World has confidence in our product and commercialization approach.”

“We have a bigger-picture version of our smart farm platform, going from carrying 150 lb.,” she said. “With the Carry autonomous harvest companion plus scheduler software, there can be a 30% increase in farmworker productivity and safety. It can provide sensor data on loads, weight per location, and date stamps.”

“With a personalized fleet management solution, imagine farmers having not just one but six with built-in predictive analytics,” said Reddy. “The scheduler can tell Carry to go to the farthest picker, like Lyft or warehouse robots optimizing efficiencies.”

Stavros Vougioukas, an associate professor of biological and agricultural engineering at the University of California, Davis, has joined Future Acres as an advisor. He has 20 years of agricultural robotics research experience and previously worked with Sun World on a similar project. Vougioukas will help advance Future Acres’ software, particularly for localization. 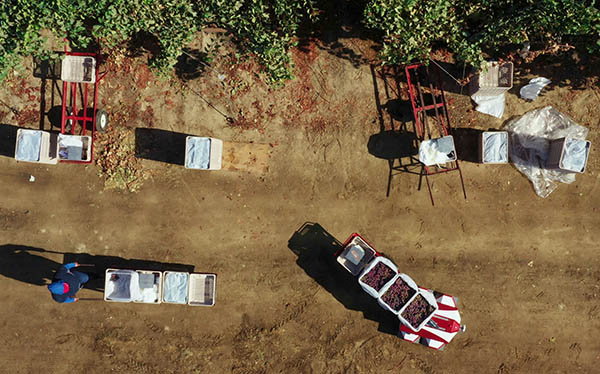 The Carry system as seen from above. Source: Future Acres and Sun World

“AWS asked us to join its flagship accelerator program, and we're also working with Wavemaker to de-risk the market and chronological risk. I breathe a lot easier.”

Future Acres has raised more than $1 million on SeedInvest to date, and its campaign ends on Oct. 6.

Why has investment in agricultural robotics been slow until lately?

“A healthy skepticism is important,” Reddy said. “Once we can demonstrate that our technology works, we'll see an accelerated evolution in agtech unlike any we've seen in recent decades.”

“From traditional agricultural investors, because of sustainability and climate concerns, their curiosity has piqued,” she added. “They need more education on the robotics and AI side.”

But how important is sustainability to farmers? “Sustainability isn't their top priority— labor challenges are,” replied Reddy. “How farmers express it to me is that when they think of a 20% shortage, that's 20% less crops harvested. We saw huge incidences of crop, dairy, and meat waste during the COVID-19 pandemic.”

“Second, the government is thinking of instituting new labor policies, because working in 110-degree temperatures is not sustainable,” she said. “The longer-term goal is for UGVs [unmanned ground vehicles] to gather data for crop metrics and to understand disease. With environmental sensors, there can be better use of resources, people, water, and pesticides.”

Future Acres plans to conduct its first demonstration of its next-generation prototype at Sun World's International Center for Innovation during this year's harvest season.

'We're being realistic about the time needed to develop hardware,” Reddy said. “In October and November, we'll get a sense of the terrain, working with crews and grapes rather than sandbags at our lab.”

“Next year, we hope to get to a full-scale pilot with 10 robots at partners,” she said. “The following year, we'll get to manufacturing.”

Future Acres and Sun World
The Carry robot is designed to help workers in vineyards.

Future Acres Partners With Sun World International for Robot to Aid Vineyard Workers
In addition, Stavros Vougioukas, an associate professor at the University of California, Davis, has joined Future Acres' advisory board.