Plug and Play will present Kärcher with Corporate Innovation Award and celebrate the partnership with InOrbit that it facilitated. 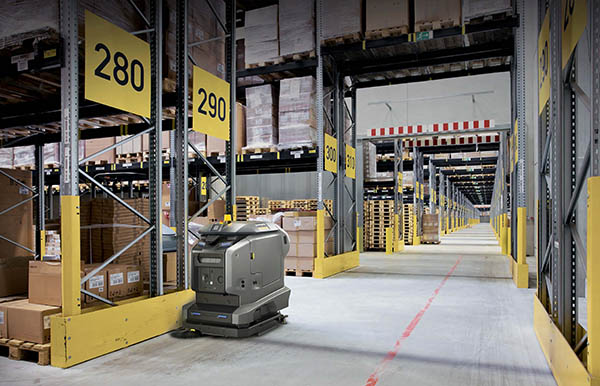 Florian Schoebinger, the head of startup partnerships and investments at Kärcher Silicon Valley, and Felipe Garcia Lopez, the head of robotic systems and software engineering at Kärcher, received the award on stage.

Kärcher said it is a leading provider of cleaning technology. The family-owned enterprise employs 14,400 people in 78 countries and has 150 subsidiaries. It has more than 50,000 service centers around over the world. In 2021, the company achieved the highest sales in its history, with €3.092 billion ($3.2 billion U.S.).

Kärcher recently introduced its KIRA B 50 autonomous mobile robot for cleaning. The system can clean and return to a docking station for battery recharging, to empty its recovery tank, and to add fresh water on its own. KIRA B 50 can be deployed in environments including warehouses, schools, supermarkets, and high-tech factories.

The company wanted to further automate and provide additional robots in its product lines, so it sought a robot operations platform.

Sunnyvale, Calif.-based Plug and Play has more than 400 corporate partners and over 40 offices worldwide. Its startup community has raised $12 billion in venture funding to date. During a Plug and Play Focus Week in 2019, Kärcher staffers met with InOrbit, a part of that year's accelerator batch.

“Thanks to one of Plug and Play’s community events, we were able to meet InOrbit when we weren’t even aware of this tech,” stated Schoebinger in a case study available from Plug and Play.

The company added that it worked with Kärcher's services team to define the business models it needed to succeed with automation. InOrbit said its fully managed service handled interventions in real time, allowing Kärcher's robots to take advantage of full autonomy.

“The adoption of InOrbit’s robot operations platform to augment our own development provides a value-added offering from Kärcher that competitors can’t match,” said Marco Cardinale, vice president for robotics at Kärcher. “Together, we can pass along operational efficiency to keep robots doing what they do best, while the human workers around them are safer and more productive in their tasks.”

InOrbit and Kärcher have collaborated since 2020 and launched their joint offering on the market in May 2022. InOrbit tools including Data Backfill, real-time configurable analytics, advanced incident detection, and InOrbit Time Capsule proved useful once tuned to KIRA's specific needs.

The companies also said it was important to involve stakeholders early to avoid friction and to have an “innovation champion” to translate between corporate and startup cultures. In addition, “transparency, consistency, and timing are essential,” they said.

InOrbit and Kärcher said they now provide a “single pane of glass” for monitoring and optimizing the performance of Kärcher's cleaning robots. They partners said they plan to develop more use cases together.