Myomo has added to its patent portfolio, helping it make its assistive and thereapeutic devices more widely available worldwide. 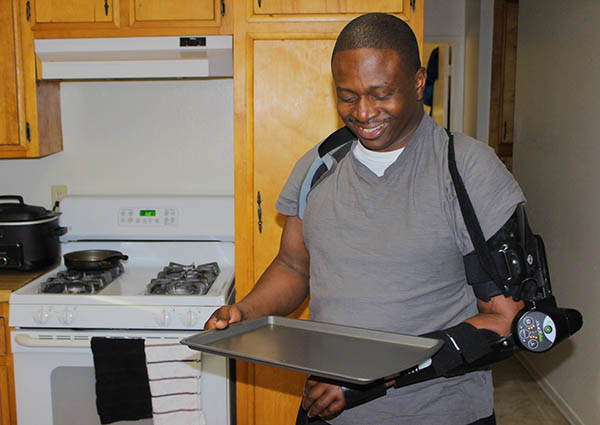 Myomo
The MyoPro wearable orthotic device can help patients with brachial plexus injuries such as Andrew.
By Robotics 24/7 Staff
·

Myomo Inc. last week announced that it has obtained a patent from the Japanese Patent Office toward its MyoPro device, which is designed to aid users in moving their arms and to support grasping. The Cambridge, Mass.-based company said the latest approval joins a family of 20 patents it has acquired in the U.S., Europe, China, and Japan.

“We have worked diligently to advance our technology and are delighted to strengthen our global patent portfolio,” said Paul R. Gudonis, chairman and CEO of Myomo. “This new Japanese patent will be particularly valuable in establishing any future business ventures for that market.”

Myomo described itself as “a wearable medical robotics company that offers improved arm and hand function for those suffering from neurological disorders and upper-limb paralysis.” Last year, the company's assistive device completed the first phase of clinical trials of controls driven by sensors embedded in the brain of a stroke patient.

Myomo said that Japan's Patent No. 6998478, titled “Powered Orthotic Device and Method of Using Same,” covers its MyoPro device, which supports movement of a user’s arm above the elbow, as well as a user’s fingers and thumb.

Because the motion can be triggered by electromyographic (EMG) and inertial sensors, the resulting movement is controlled by the user’s voluntary actions, said the company. Myomo said it has developed devices that can serve dual roles as both assistive in achieving desired motion and as therapeutic in supporting rehabilitation.

MyoPro is a powered upper-limb orthosis designed to support the arm and restore function to the weakened or paralyzed arms of certain patients. It is intended to help those suffering from cerebrovascular accident (CVA) stroke, brachial plexus injury, traumatic brain or spinal cord injury, ALS (amyotrophic lateral sclerosis, also known as Lou Gehrig's disease), or other neuromuscular disease or injury.

Myomo claimed that MyoPro is currently the only marketed device that, sensing a patient’s own EMG signals through non-invasive sensors on the arm. It can help restore an individual’s ability to perform activities of daily living, including feeding themselves, carrying objects, and doing household tasks, the company added.

Many MyoPro are able to return to work, live independently, and reduce their cost of care, said Myomo. It added that MyoPro is increasingly available internationally.

Myomo
The MyoPro wearable orthotic device can help patients with brachial plexus injuries such as Andrew.

Robotics Promises to Help People With Disabilities
From exoskeletons and prosthetics to grippers and motion control, here are some examples of innovations that can change lives for...