Picnic's robot-assembled pizzas will be among the food featured by Sodexo Live! at championship in New Orleans. 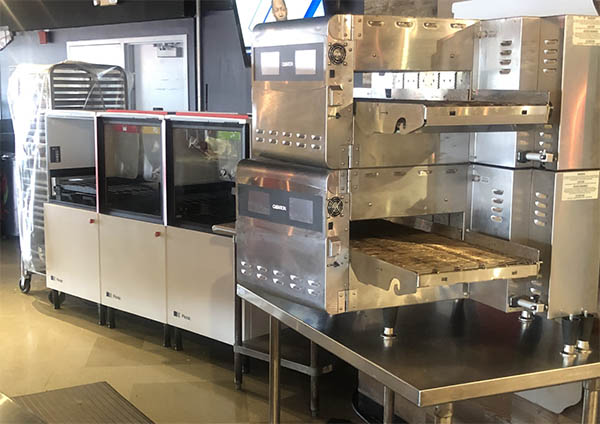 Sodexo Live!
Picnic's robotic system will make up to 100 pizzas an hour at the college basketball championship.
By Robotics 24/7 Staff
·

As “March Madness” draws to a close, college basketball fans can dine on robot-assembled pizza. Sodexo Live! today announced specialty menu options for this weekend's championship festivities at Caesars Superdome in New Orleans. Picnic Works Inc.'s automated pizza station will be among the options for the more than 100,000 spectators expected at the games.

“Our team, made up of employees exclusively from the surrounding region, is incredibly excited for this top-tier event, and our approach has certainly been enhanced to meet the moment,” said Steve Pangburn, CEO of Sodexo Live! North America. “From the automated Picnic Pizza Station, which will free our staff up to focus on other fan-facing tasks, to the basketball-themed items, we know everything will be a slam-dunk for college basketball fans to enjoy.”

Sodexo Live! is the product of Issy-les-Moulineaux, France-based Sodexo's acquisition of Stamford, Conn.-based Centerplate Inc. in 2018. The Gaithersburg, Md.-based hospitality partner has 40,000 employees and manages conference, cultural, and sporting venues and events at 500 sites around the world.

Picnic to make up to 100 pies an hour

The college basketball championship is an extension of Picnic's partnership with Sodexo Live! to explore food service automation. The companies have demonstrated automated pizza production for attendees at T-Mobile Park in Seattle and the Las Vegas Convention Center. 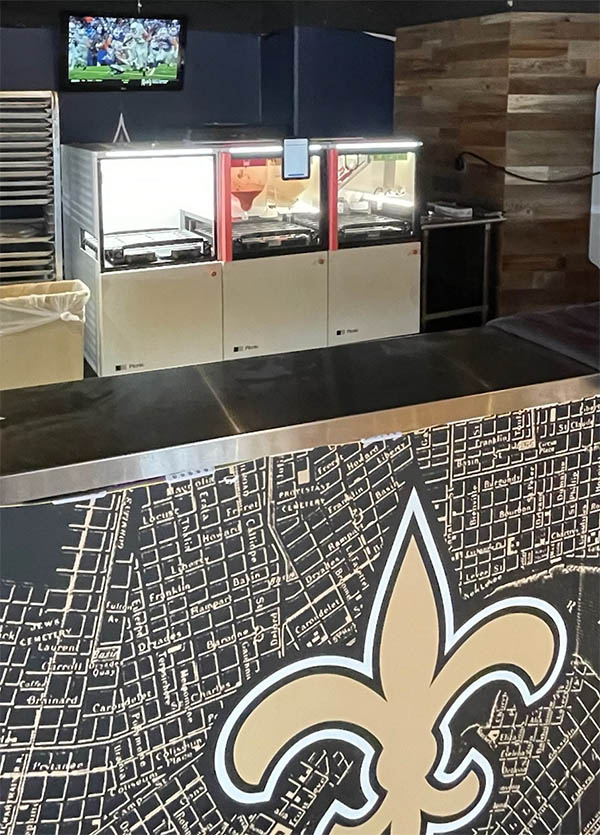 This weekend, the Picnic station will be in the Miller Lite Club at the Caesars Superdome, providing pizza slices and whole pizzas at a rate of up to 100 12-in. pizzas per hour, Sodexo said.

“Picnic was founded on the belief that automation in food service can help address the challenges of food waste and labor shortages while increasing profitability,” said Clayton Wood, CEO of Picnic.

“This latest collaboration with Sodexo Live! is another step forward in showcasing our shared partnership goals and beliefs that kitchen innovation improves the experiences for staff and guests,” he said.

Founded in 2016, Picnic said its modular pizza-making machine combines robot arms, the cloud, and deep learning technology. The Seattle-based company announced the commercial availability of its Picnic Pizza System in August 2020 and raised $4.2 million in Series A funding last year. Picnic offers its system through a robotics-as-a-service (RaaS) model.

Staffing shortages, the need for consistent quality and hygiene, and the opportunity to make freshly prepared meals more available have led to a boom in interest in automation. In addition to Picnic, other companies developing and testing robotic pizza kitchens include Basil Street, Hyper Robotics, Pazzi Robotics, Piestro, Pizza Forno, Stellar Pizza, and xRobotics.

Researchers at the Massachusetts Institute of Technology this week described a framework that could enable a robot to manipulate deformable objects such as pizza dough.

Sodexo Live! touted its local ties to New Orleans. It is the exclusive catering partner to the Caesars Superdome, Smoothie King Center, Champions Square, and Morial Convention Center. This is the tenth time the company has hosted the basketball championship, its sixth in New Orleans and the second time in a row after last year’s event in Indianapolis.

Leading the culinary efforts for this weekend at the Caesars Superdome is Chef Lenny Martinsen, who has also hosted multiple Super Bowls at the venue, plus the college football national championship, top-tier concerts, the annual Sugar Bowl, and more. He oversees a work-based learning (WBL) program for local students who aspire to work in the culinary field. The trainees get certified in ServSafe food handling, in partnership with the National Restaurant Association.

Sodexo Live! also noted that its leadership team has a total of more than 200 years of industry experience. In addition, the company will donate excess food at the end of the event to local groups like the Second Harvest Food Bank and New Orleans Mission.

Sodexo Live!
Picnic's robotic system will make up to 100 pizzas an hour at the college basketball championship.