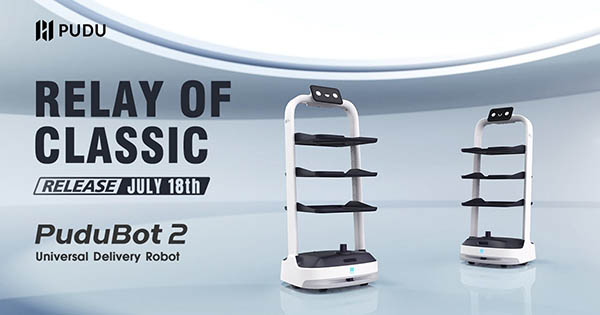 Pudu Robotics this week unveiled its newest commercial service shelf robot designed for deliveries, the PuduBot 2. The PuduBot 2 features a seven-layer adjustable tray to be used for a variety of service tasks in industrial facilities, leisure and entertainment venues, retail stores, supermarkets and more, the company said.

Shenzhen, China-based Pudu claimed that the PuduBot 2’s high-performance lithium iron phosphate (LFP) battery can provide up to 24 hours of operational battery life on a three-hour charge. Besides the increased sustainability, the PuduBot 2 also comes with an upgraded system that increases driving stability by 30%, it said.

The company released the original PuduBot in 2017.

The PuduBot is equipped with Pudu Robotics' self-developed PUDU simultaneous localization and mapping (SLAM) technology. It also features an fusing laser and visual positioning navigation technology that the company said can cut deployment times by 75% without the need to redecorate ceilings. Pudu said this ensures stable operation even in environments with ceilings up to 20 m (65 ft.).

In addition, the PuduBot 2 has dual lidar sensors that allow it to constantly and accurately visualize its surroundings and make intuitive course adjustments, according to the company.

With the PUDU OS, users can use an intuitive toolkit to design mapping paths and directions for their mobile robot fleets and keep track of each robot's whereabouts at all times by using the smartwatch app.

Each PuduBot 2 can communicate not only with users, but also with other nearby devices. It automatically calibrates the best pathing for increased efficiency and flow over the shared network.

Pudu Robotics is among a handful of robotics companies that have announced layoffs over the past few weeks. The company’s CEO attributed the layoffs to the impact of the COVID-19, as well as failing private equity investments, and the company’s long road to profitability, according to the South China Morning Post.

Geek+ Opens U.K. Headquarters, Launches Mobile Robot Project With Paack in Madrid
Geek+, which entered the European market only in 2019, has deployed autonomous mobile robots in more than 30 countries.