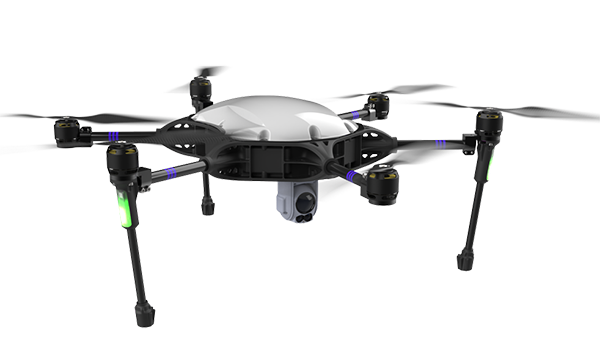 infiniDome
A customized Osprey Hexa-copter was used in the demonstration of the Robust Navigation System.
By Robotics 24/7 Staff
·

As the price of unmanned aerial vehicles goes down, their capabilities improve, and regulations ease, they are finding more missions in defense, homeland security, and other security applications. InfiniDome Ltd., Honeywell Aerospace, and Easy Aerial Inc. yesterday announced the Robust Navigation System, which integrates GPS anti-jamming technology, a radar velocity system, and an inertial navigation system.

The companies claimed that the technology is the first resilient system allowing drones to not only safely operate, but also successfully complete their missions, even in GPS-challenged or fully denied environments.

Unmanned aerial vehicles (UAVs), from a 20-lb. Class 1 multicopter to a 150-lb. Class 3 fixed-wing drone, rely almost entirely on the Global Navigation Satellite System (GNSS) for the most basic navigation functionality, particularly for beyond visual line-of-sight (BVLOS) and autonomous operations.

Due to the weak and vulnerable nature of the GNSS signal, it is extremely susceptible to jamming attacks that can currently be carried out over large distances with a $50 jammer bought online, said the partners.

UAV developers or end users try to solve this problem by creating “safe landing protocols” in GNSS-challenged environments or by adding lidar, optical, or other sensors to their flight controllers. Such sensors can provide a reasonable source of positioning data, but only in some scenarios, according to infiniDome. The problem is that they do not work in instances such as when flying too high, too low, or too fast, in fog or darkness, or above the sea, it added.

The Robust Navigation System is built on Honeywell's Compact Inertial Navigation System (HCINS) and infiniDome’s GPSdome GNSS anti-jamming technology, integrated with Honeywell’s Radar-based Velocity System (HRVS). The companies said it can be installed on almost any UAV, providing it with continuous, accurate navigation data in GNSS-challenged or fully GNSS-denied environments.

A regular, unprotected UAV, when faced with military-grade jammers, loses GNSS accuracy within three to five seconds, said the companies. It would tilt at an aggressive angle and take off in seconds. The only way to avoid it drifting kilometers away and eventually crashing is to assume manual control and visually bringing the UAV back.

The demonstration's goal was to show that the UAV, under a GPS challenged environment (single direction of jamming) and fully denied environment (multiple directions of powerful jamming), could perform BVLOS and autonomous tasks accurately and safely without needing to assume manual control of the UAV.

Each test was designed to be more difficult than its predecessor and would be executed only if the previous one was successful. The intention was to find the barrier at which the system would fail.

The control systems making up the GPS input for the Robust Navigation System demonstration. Source: InfiniDome

Finally, the test involved performing the lift-off, executing the full polygon described above, and landing under jamming conditions from before lift-off.

As part of a sanity check, the Robust Navigation System was disconnected, leaving the UAV unprotected, in simple loitering mode. With single jammer in operation, the UAV aggressively drifted off in seconds, only to be stopped and controlled manually by the operator.

The demonstration concluded that the UAV, protected by the Robust Navigation System, passed all planned tests. It proved that in a GNSS-challenged environment and even in a full GNSS-denied environment, an aerial drone can not only safely land or return home, but it can also complete its BVLOS or autonomous mission.

About the tester trio

Founded in 2015, Easy Aerial provides of drone-based monitoring for government, enterprise, and defense applications. The Brooklyn, N.Y.-based company said its free-flight, tethered, and drone-in-a-box systems are payload-agnostic, fully autonomous, modular, portable, and rugged, with the ability to operate in the most adverse weather conditions.

Easy Aerial said its drones can be deployed for mission-critical applications such as perimeter and border security, event monitoring, first-responder support, agriculture monitoring, industrial inspection, and tactical military maneuvers, without the need for a human operator. Easy Aerial is an ISO9001 and AS9100 certified company with regional offices in Tel-Aviv, Israel, and Belgrade, Serbia.

infiniDome
A customized Osprey Hexa-copter was used in the demonstration of the Robust Navigation System.