Sarcos Technology and Robotics Corp. said it has met a milestone in the development of its Guardian XT mobile manipulation system. Sarcos Robotics
The Guardian XT is a teleoperated robotic avatar that enables human workers to stay out of harm's way.
By Robotics 24/7 Staff
·

Sarcos Technology and Robotics Corp. today announced that it has successfully completed assembly of the beta version of its Guardian XT mobile avatar system at the end of 2021, as scheduled. The Guardian XT robot is an upper-body variant of the award-winning Sarcos Guardian XO full-body, battery-powered industrial exoskeleton.

“We are extremely pleased with the progress we’ve made in the development of our Guardian XT robotic system,” said Kiva Allgood, president and CEO of Sarcos. “We’ve made some notable improvements to the beta version, and ultimately, we believe this robot will have a significant and positive impact on a variety of industries, enabling increased productivity while keeping the operator out of harm’s way.”

The Salt Lake City, Utah-based company said it has developed industrial systems that augment human intellect with the strength, endurance, and precision of machines to enhance employee safety and productivity. Sarcos serves the construction, defense, logistics, and utilities industries.

Based on more than 30 years of research and development, the company's systems include the Guardian S inspection robot, the Guardian GT mobile manipulator, the Guardian XO full-body industrial exoskeleton, and the Guardian XT teleoperated avatar. In October, Sarcos won a U.S. Navy contract to expand testing of its Guardian DX single-armed teleoperated robot.

Sarcos said its Guardian XT is a dual-armed robot designed to perform tasks with human-like dexterity while keeping the operator at a safe distance in challenging and hazardous conditions, including at height.

The system is platform-agnostic and modular, enabling the robot to be mounted to a variety of mobile bases, the company said.

The beta version of the Guardian XT robot incorporates several technical improvements from the alpha version, including additional degrees of freedom in the wrist, upgraded software, more advanced end effectors, and enhancements to the proprietary SenSuit motion-capture controller.

Sarcos is currently conducting internal beta testing of the Guardian XT robotic avatar system and expects to deliver units to partners for additional testing in the middle of this year. The company plans to begin production of the first commercial units, which will incorporate learnings from the beta tests, at the end of 2022.

Sarcos Robotics
The Guardian XT is a teleoperated robotic avatar that enables human workers to stay out of harm's way.

Ottonomy Opts for Multiple Use Cases for Indoor/Outdoor Robots, Including First Mile Deliveries
Ottobot 2.0 is being used in airports and intralogistics, as well as for last-mile deliveries, explains Ottonomy's CEO. 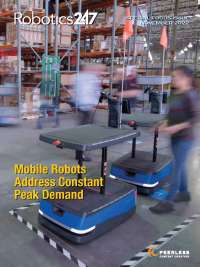 Sarcos Successfully Demonstrates Robotics for Shipyard Maintenance, Inspection, and Repair
Sarcos Technology and Robotics Corp. Hones Robots, Exoskeletons With Humans in the Loop
Add Robots to Your Cold Chain Warehouses to Keep Workers Safe
RE2 Marks Technical Achievement With STARFISH Gripper for the U.S. Navy
RE2 Robotics Continues to Grow After Sarcos Acquisition