The University of Bonn team conducted its final round of tasks in just under six minutes, half the time of its nearest competitor. 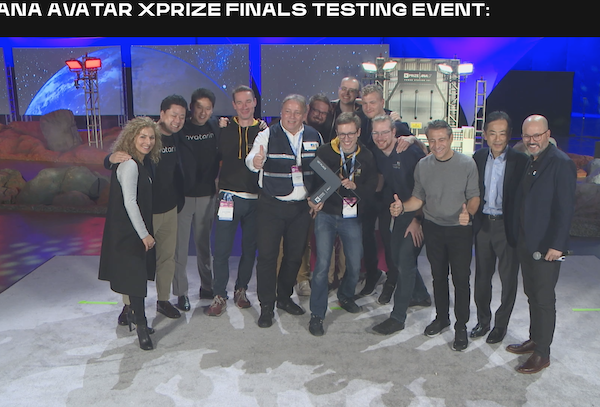 From emergency response to mutliplying the efforts of remote workers, teleoperated robots show great promise. This weekend, the final round of the ANA Avatar XPRIZE tested combinations of robots, artificial intelligence, advanced sensors, and virtual reality for telepresence and teleoperation.

The free, public event was held at the Long Beach Convention & Entertainment Center in California on Nov. 4 and 5 and was live-streamed online. The qualification process began in March 2018, and 17 teams from 10 countries competed for $8 million in prizes.

“This competition is not only about advancing the future of robotics; it is, fundamentally, about the future of human connectivity,” said David Locke, executive director of the ANA Avatar XPRIZE. “I’m excited to see the capabilities that the teams will bring at the end of this four-year journey with us, making telepresence a reality.”

XPRIZE said it conducts competitions to inspire crowdsourcing solutions to “the world's grandest challenges in exploration, environment, and human equity.” The organization's competitions include the $10 million Rainforest XPRIZE.

The ANA Avatar XPRIZE challenged teams to develop robotic avatars through which its operators could see, hear, and interact with objects in real time in a remote environment, transporting the operators as if they were physically present.

The mobile robots needed to be able to operate in human spaces, weigh less than 160 kg, and work without a tether for power and control.

Out of the 99 teams from around the world that registered in 2018, the field narrowed from 77 teams to 38 semifinalists in April 2021. By October 2021, that number was reduced to 15 finalists, with two teams joining after that.

The teams pushed the limits of immersive telepresence technology by testing their creations on a series of complex tasks across a custom-built test course. The remotely operated systems needed to conduct 10 tasks, including maneuvering, identifying themselves, flipping switches, operating power tools, and grasping objects. Teams had 25 minutes to complete the course.

More than 1,000 people were pre-ticketed to attend the finals in Long Beach, including students, educators, and leaders in the fields of robotics. The live audience consisted of more than 2,100 over two days. It was XPRIZE’s first public testing event since the Ansari XPRIZE in 2004.

In addition, leading technology organizations, such as Blue Origin, FIRST Robotics, JPL, SenseGlove, DLR, and vRotors; universities including USC, UCLA, and IHMC; and others offered exhibits as part of the XPRIZE Tech Fair.

After the first day of live testing on Nov. 4, the field narrowed from 17 teams to 12, as NimbRo from the University of Bonn, Germany, took the lead by performing its tasks in under two minutes. The judges operated the robots with only an hour's training each.

The other finalist teams included

The mobile manipulators needed to traverse space in a simulated energy plant, find a weighted canister, and successfully pick and place them. NimbRo conducted its task in about 5:50, about half the time of second-place winner, Pollen Robotics. Team Northeastern placed third with 21:09.

“NimbRo’s work demonstrates the remarkable potential of avatar technology to transcend time and distance and help address urgent human challenges, from health care access to disaster relief,” said Anousheh Ansari, CEO of XPRIZE. “The final testing event was an exciting opportunity to share the power of telepresence with thousands of people in-person and around the world. We are grateful to all the participating teams for their impressive work and their efforts to boldly push technological boundaries.”

“Our goal was a clear and objective win,” Peter Diamandis, founder and executive chairman of the organization. “We talked about our prizes being audacious and achievable. ... This began in 2016 when ANA asked what would disrupt the airline industry.”

Diamandis thanked All Nippon Airways (ANA) for its $20 million sponsorship of the ANA Avatar XPRIZE, which included the prizes and the cost to run the competition.

“The ANA Avatar XPRIZE demonstrates the power of avatar technology and its ability to strengthen our society and improve lives,” said Junko Yazawa, executive vice president of ANA. “These innovations, exemplified by the work of NimbRo and the other finalists, are a major step forward toward our goal of creating a more connected world.”

Founded in 1952 with just two helicopters, ANA said it is now the largest airline in Japan. Established in 2013, ANA Holdings Inc. includes 71 companies including ANA and Peach Aviation, which claimed to be the leading low-coast carrier (LCC) in Japan.

“Seeing the future of robotics and telepresence come together has been an incredible experience, said Locke. He acknowledged the work of all the teams and thanked the 17 judges.

“Telepresence and avatar technology will be an essential part of human progress in the decades to come,” Locke added. “Through the ANA Avatar XPRIZE, what we saw these past few days was a leap-ahead in this technology area that will make a difference in how people connect in the future.”

“It's just the beginning—all the teams can take their technology and prove it in the marketplace,” said Diamandis.