Teams from eight countries are competing to create a robotic avatar that can transport human presence to a remote location instantly. 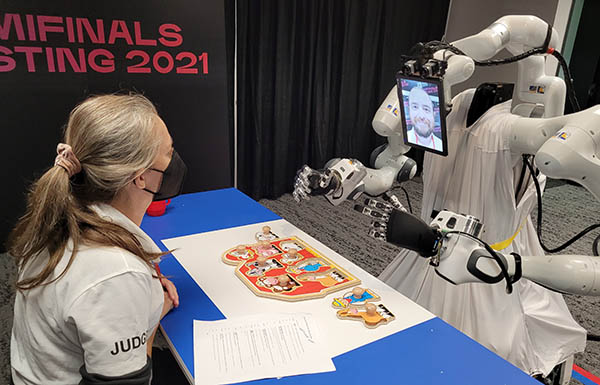 The field has narrowed in the $10 million, four-year ANA Avatar XPRIZE Competition, which is intended to encourage the development of robotic avatars that could deploy a human user's senses, actions, and presence to a remote location in real time. XPRIZE yesterday announced that 15 teams from eight countries are advancing to the finals round.

“We’re thrilled to announce the finalist teams moving forward in the ANA Avatar XPRIZE,” said David Locke, executive prize director of the competition. “The cutting-edge technology we witnessed at semifinals testing has the potential to entirely reimagine the human experience. We’re excited to see how teams further fine-tune their technology systems as we lead up to finals testing.”

Sponsored by All Nippon Airways (ANA), Japan’s largest airline, the global competition is looking for avatars that can execute tasks across a variety of real-world scenarios and convey a sense of presence for both the operator and the recipient in those interactions.

“The possibility of living in a world where individuals can provide aid during a crisis in a different country without ever leaving the comfort of their homes is closer than ever,” said Anousheh Ansari, CEO of XPRIZE. “While it's been difficult this year to predict what the future will bring for the evolving health landscape, these avatar solutions will solve real-world problems and can bring people together in more ways than ever before.”

Last month, the 37 semifinalist teams brought their avatar systems to Miami to be evaluated by the judging panel. The judges extensively reviewed the submissions and selected 15 finalists to advance.

For the first time, Culver City, Calif.-based XPRIZE has publicly ranked the teams in terms of of how well each one met the competition's scoring criteria. The ANA Avatar XPRIZE Finalist teams are as follows, listed in order of ranking:

“We've had quite a few pieces come together,” Shayne Shaw, robotics engineer at Touchlab Ltd., told Robotics 24/7. “We've seen some of what others are doing, but we've been mostly heads down. Because of the pandemic, some teams dropped out, including a strong Tokyo-based team. It would have been great to compete against them.”

“I'm proud of the accomplishments of our international and interdisciplinary team,” said Jeremy Fishel, founder and chief technology officer of Tangible Research and Converge's XPRIZE team lead. “We've brought together experts in robotic dexterity and haptics with the amazing technology of our partners and collaborators to do amazing things.”

Converge Robotics Group is an international collaboration between Shadow Robot Co., HaptX, and Tangible Research responsible for developing the Tactile Telerobot, a high-fidelity dexterous telerobot in use in the U.S., the U.K., and Asia.

“We are very excited to have 15 teams safely moving forward to the ANA Avatar XPRIZE Finals, despite current COVID-19 restrictions,” said Junko Yazawa, senior vice president of All Nippon Airways. “We are really proud of their achievements so far with their innovative avatar technology that will most definitely be an important part of our future in travel and human connections. We look forward to witnessing our dreams come true as the teams showcase their avatars once again for the finals.”

The 15 finalist teams will equally share a milestone prize purse of $2 million and move on to finals testing in fall of 2022. The teams will compete to win a share of the $8 million finals prize purse, with the grand prize winners receiving $5 million, and second and third place getting $2 million and $1 million, respectively.

The grand, second, and third place prizes will be awarded in Fall 2022 after finals testing is completed, said XPRIZE. Performance tests will be evaluated based on specific tasks that showcase the application of the avatar technologies across several use case scenarios.

The winning team must integrate multiple emerging technologies to develop a physical, nonautonomous avatar system which its operator can see, hear, and interact within a remote environment in a manner that feels as if they are truly there, the contest organizers.