The Ondas Holdings unit will add sensors to its autonomous drone platform to automate inspection of oil and gas assets. 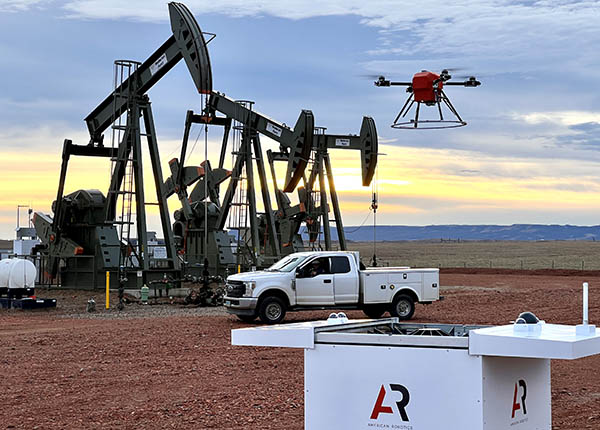 As sustainability becomes a higher priority for scientists and the public, methane has been identified as a contributor to global climate change. Ondas Holdings Inc. today announced that its American Robotics Inc. subsidiary has entered into a strategic technology partnership with Infrared Cameras Inc., or ICI. The companies will equip American Robotics' Scout drones with ICI's sensors to automate inspection of oil and gas assets and identification of methane leaks.

“We are excited to partner with American Robotics to bring innovative solutions to the oil and gas industry,” said Gary Strahan, founder and CEO of Infrared Cameras Inc. “We believe that our state-of-the-art software and multi-sensor payloads, combined with American Robotics' leading drone solution, will greatly benefit clients across the oil and gas industry.”

ICI has developed and manufactured infrared imaging technology since 1995. Veteran-owned and based in Beaumont, Texas, the company offers equipment, custom designs, on-premises and cloud-based software, calibration, training, and more. ICI said its mission is to “develop the most sensitive, accurate, and competitively priced infrared cameras and supporting software in the world.”

Methane is the main component of natural gas, and recent studies have found that U.S. cities may be leaking twice as much as previously assumed, reported Science. Stanford University also found that one production region in New Mexico was also emitting several times the amount of federal government estimates. There are economic and health costs in addition to environmental ones, noted Bloomberg.

ICI's optical gas imaging (OGI) and thermal sensors will enable the Scout System to autonomously collect critical data and identify anomalies such as methane leaks and equipment and electrical hotspots. The new technology will also enable customers to reduce operational expenses, minimize reputational risk, and safeguard employees and the environment, said the companies.

“American Robotics continues to see some of the oil and gas industry's largest companies focus on integrating autonomous drones into their operations to conduct regular site inspections and ensure employee safety,” stated Reese Mozer, co-founder and CEO of American Robotics.

“Through our strategic technology partnership with ICI, we continue to expand our product offerings with key features tailor-made for the oil and gas industry, enabling customers to automate inspections of critical assets such as tanks, pipes and pumps,” he added. “Importantly, the solutions being developed in connection with our ICI partnership are designed to meet specific customer requests.”

American Robotics differentiates itself with drones as a service

American Robotics said the incorporation of IGI's sensors will help it differentiate itself in the autonomous drone-in-a-box (DIB) market. The drone-in-a-box offering is a variation on the robotics-as-a-service (RaaS) business model.

Waltham, Mass.-based American Robotics said the partnership will position it as a leader in the competitive oil and gas industry, where the market for drones could reach $23.9 billion by 2027. The company and ICI said they plan to release their combined technology in 2023.

American Robotics claimed that Scout is the first drone system approved by the U.S. Federal Aviation Administration for automated operation beyond the visual line of sight (BVLOS) without a human operator on-site.

Exyn and Trimble Outfit Spot Robot With Scanning, Mapping Systems for Construction Industry
The companies said they provide customers with the tools they need to create detailed maps for construction tasks.
More Inspection