AutoX claims to be a world leader in Level 4 fully autonomous taxis in China. 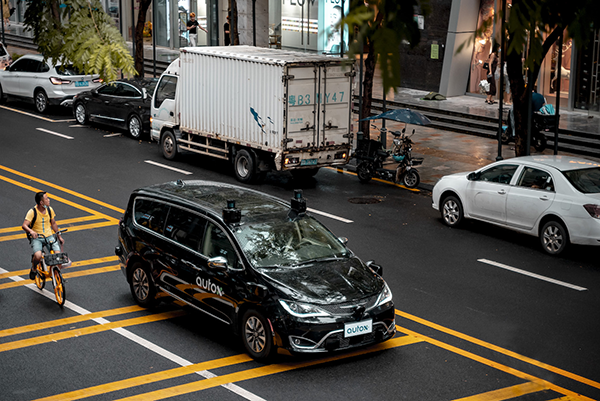 AutoX
AutoX is operating its robotaxi fleet in Shenzhen, China.
By Robotics 24/7 Staff
·

AutoX today said it is now operating fully driverless robotic taxicabs in China's largest service area across 65 sq. mi. (168 sq. km.) in its home city of Shenzhen. The company claimed that its vehicles can navigate all of the public roads in the Pingshan District, making it the first to cover an entire district in a major Chinese city.

Dr. Jianxiong Xiao (a.k.a. “Professor X”), who has experience from MIT and Princeton, founded AutoX in 2016. The company has been developing SAE Level 4 autonomous vehicles to handle the most challenging and dynamic traffic scenarios in urban centers around the world. It has eight offices and five research and development centers around the world.

AutoX said it is the first and currently only company in China operating a self-driving robotaxi service on public roads without safety drivers. It added that it was the second company to obtain a permit from the California Department of Motor Vehicles to operate a fully driverless robotaxi fleet.

The company said it has deployed more than 100 robotaxis in Shenzhen, Shanghai, and other Chinese cities. In January, AutoX launched the world’s second (after Waymo) and China’s first fully driverless robotaxi service that is open to the public. 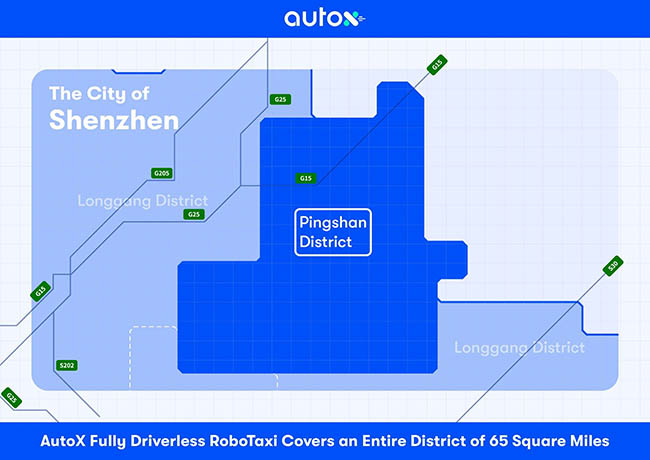 After 10 months of operation, the service area in Shenzhen has gradually expanded to become the largest fully driverless robotaxi zone in China, said AutoX.

The Alibaba-backed company also released a new video of its driverless robotaxi navigating the expanded service area. The vehicle swiftly drove through Shenzhen's commercial center, arrived at its high-speed train station, and pulled up to the curb in front of a long line of parked vehicles dropping off passengers.

The initial global market for robotaxis is small, but its growth potential is huge, according to market analysis firms. The number of robotaxis could grow from 617 units in 2021 to 1.4 million units by 2030, experiencing a compound annual growth rate (CAGR) of 136.8%, according to Markets and Markets.

Research and Markets predicted a 60% CAGR in market value, citing traffic safety and environmental concerns as drivers. It said the Asia-Pacific region is the dominant market for self-driving car services.

AutoX
AutoX is operating its robotaxi fleet in Shenzhen, China.

Gatik and Walmart Conduct First Fully Driverless Deliveries in Arkansas Route
The companies claimed that their removal of the safety driver from autonomous trucks is a first for B2B short-haul...

Kodiak Robotics Raises $125M Series B to Advance Self-Driving Trucks
Kodiak Robotics plans to use the oversubscribed round of funding to accelerate its operations and grow its staff.