The company, which was one of the first to obtain permission to test robotaxis in both the U.S. and China, has received funding from Nissan and others. 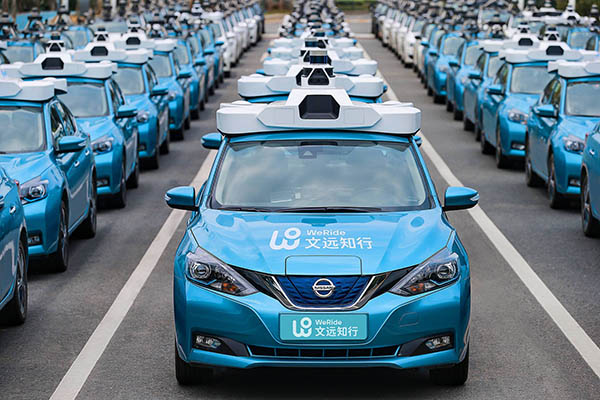 WeRide
WeRide has been developing and testing self-driving vehicles for ride-hailing services.
By Robotics 24/7 Staff
·

WeRide.ai, which claims to be the first startup to have permission to test driverless cars in both China and the U.S., today announced that it has closed its $310 million (U.S.) Series C fundraising round. The Guangzhou, China-based company said it plans to use the financing to continue developing and commercializing its autonomous vehicle technology.

“WeRide Master Platform, our core autonomous driving technology solution, has helped to accelerate the company’s development,” stated Tony Han, founder and CEO of WeRide. “This drives the successful operation of our robotaxi service in Guangzhou since 2019 and the introduction of the WeRide driverless Mini Robobus, a completely new product category to the autonomous industry.”

“It has been rewarding to see that these remarkable achievements have resulted in investor optimism,” he added. “With this round of funding, WeRide will continue to invest in R&D and commercialization, with the aim of delivering large-scale autonomous mobility in the coming future.”

Established in 2017, WeRide said its goal is to provide “the most advanced autonomous driving technology, which will make our trips safer and more efficient.” The company has research, development, and operation centers in China and the U.S.

WeRide said it launched the first robotic taxicab service, completely open to the public, in November 2019, covering an area of 144 sq. km (55.5 sq. mi.) in Guangzhou. Since June 2020, its robotaxi service has been available through Amap, a ride-hailing mobile app with 140 million monthly active users. A total of 147,128 trips were completed with more than 60,000 passengers during the first year of WeRide robotaxi services.

“Since its $310 million Series B funding in January, WeRide has achieved a series of notable milestones,” said the company. At the end of January, the company said it began testing self-driving cars in Guangzhou’s Central Business District (CBD), making it the first one to do so in the center of a Tier 1 city in China. It then began road testing of its Mini Robobus in Guangzhou and Nanjing.

In February, WeRide secured an official license for online car-hailing operations, becoming the first autonomous driving company in China to hold such a qualification. In April, it obtained permission for testing in San Jose, Calif.

The company added that it has accumulated more than 5 million km (3.1 million mi.) of autonomous driving experience, and it is moving forward with the commercialization of its self-driving vehicles.

Investors bring valuation to $3.3B

With its latest $310 million, WeRide said it has raised more than $600 million in the past five months, bringing its valuation to $3.3 billion.

“Nissan has a long history of delivering leading-edge technologies in electrification and autonomous driving,” said Ashwani Gupta, chief operating officer of Nissan. “Human-centric technologies are at the heart of our offerings, and autonomous driving is a vital part of it. As China stands at the forefront of helping define the future of mobility, we are delighted to partner with WeRide to bring even more innovative technologies and services to enrich people’s lives in China.”

“Being a top-notch player in automobile industry, Nissan has been a key partner of ours,” said Han. “Throughout the past three years, they have been playing a critical role in supporting WeRide’s autonomous driving platform, hence, enabling us to establish a leading fleet of Robotaxis. Being the first of its kind, the fleet has been providing a safe autonomous driving service to the public for over 18 months thus far. With the continued support of Nissan, we will accelerate the commercial use of our driverless Robotaxis in China.”

China Structural Reform Fund was another co-leader in WeRide’s Series C round.

“As one of the pioneers of autonomous driving in China, WeRide is leading the industry with its edge on proprietary technology, most of all, its product commercialization and well-executed operation,” said Ran Wei, the general manager of CCT Fund, the general partner of China Structural Reform Fund. “We believe this investment will fast-track the application of autonomous driving into urban transportation, delivering smart, safe, and green transportation experience.”

WeRide
WeRide has been developing and testing self-driving vehicles for ride-hailing services.