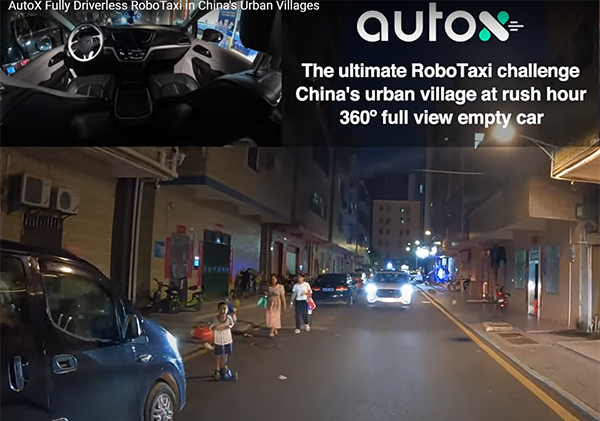 AutoX
AutoX says its RoboTaxi can handle a wide variety of situations in dense neighborhoods.
By Robotics 24/7 Staff
·

Founded in 2016 by Dr. Jianxiong Xiao, AutoX has deployed more than 100 RoboTaxis in Shanghai, Shenzhen, and other cities in China. The startup said it is the only company operating SAE Level 4 service on public roads without safety drivers.

The company is backed by Alibaba and has partnered with automakers including Honda. In addition, AutoX said it is the second company to obtain permission from the California Department of Motor Vehicles for completely driverless vehicles.

Unique to China, so-called urban villages are ultra-high-density residential neighborhoods in major cities such as Shenzhen and Guangzhou, according to AutoX. They are typically surrounded by skyscrapers, transportation infrastructure, and other modern urban developments. The public roads in urban villages are extremely busy, chaotic and overcrowded, especially in the early evening, the company said.

In the video below, an AutoX fully driverless RoboTaxi navigates its way around crowds of pedestrians and pets, bikers, scooters, and roadside food stalls during evening rush hour in a Shenzhen urban village. Encountering a fully driverless car without a driver or passengers for the first time, pedestrians can be seen gathering even closer to the robotaxi to film videos and snap photos.

A similar situation occurs again when the RoboTaxi detects an oncoming car in a narrow lane. This time, however, both cars are at opposite ends of the lane. The driverless car evaluates the scenario and makes the decision to back up twice to make room for the other car, until the two vehicles can work their way around each other.

AutoX moves ahead with Gen5 production

The RoboTaxi in the video is equipped with AutoX's Gen5 system, which was released on July 6 in Shanghai. The system has a total of 50 sensors, as well as a vehicle control unit of 2,200 TOPS (trillions of operations per second) computing power, said the company.

AutoX added that Gen5 enables its robotaxis to drive safely in complex urban environments by detecting objects such as delivery scooters behind vehicles from several hundreds of meters away. It said the system’s higher-resolution sensing capability also enables RoboTaxis to drive at higher speeds safely, extending the operational designdomain of its driverless fleet.

In January, AutoX launched China’s first fully driverless RoboTaxi service to offer rides to the public without accompanying safety drivers. After six full months of operation with a perfect safety record, the company said it is moving forward with the production of its Gen5 system to expand its RoboTaxi fleet.

AutoX
AutoX says its RoboTaxi can handle a wide variety of situations in dense neighborhoods.