Festo's bionic dragonfly and swift will appear at the 5th annual Robot Block Party hosted by MassRobotics on the Seaport Common. 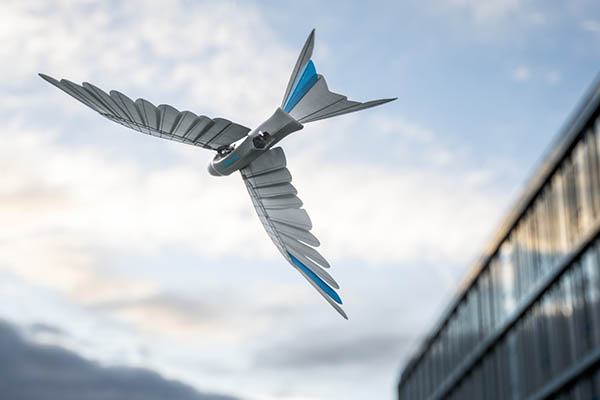 Festo
Festo's BionicSwifts are designed to be more agile than helicopters or other types of drones.
By Robotics 24/7 Staff
·

The public rarely gets to see the range of robots being developed and deployed. At the Seaport Common in Boston tomorrow, more than 40 companies and universities will showcase their latest technologies at MassRobotics' 5th annual Robot Block Party. Festo will bring its flying robotic dragonfly and swift to the family-friendly event.

“Both flying robots were inspired by nature,” said a public relations representative for Festo. “The bionic dragonfly for the first time makes it possible for a single model to carry out more flight maneuvers than helicopters and motorized and non-motorized gliders combined. Fashioned after the fast-flying swift family of birds, the agile, maneuverable Festo BionicSwifts can fly loops and steep turns.”

Esslingen, Germany-based Festo is a leading maker of pneumatic and electromechanical systems, components, and controls for process and industrial automation. Celebrating 50 years in the U.S., Festo Corp. said it has optimized motion-control systems that deliver higher-performing automated equipment for more profitable manufacturing and processing.

From 11 a.m. to 4:00 p.m. ET tomorrow, Saturday, Oct. 1, the public can see robots including Festo's BionicOpter and BionicSwifts.

Like its dragonfly inspiration, the BionicOpter can move in all directions, hover on the spot, and sail without flapping its wings. The ultra-light aircraft is designed to be more maneuverable than other types of aerial drones.

The individual segments of the BionicSwifts' artificial feathers fan out during the wing upstroke, allowing air to flow through the wing. This means the birds need less power to propel the wing upwards, said Festo.

The segments then close during the downstroke so that the flying robots can fly more powerfully, claimed the company. By closely replicating the wings of an actual bird, the BionicSwifts feature a flight profile far superior to previous flapping wing drives, Festo said.

The BionicOpter is inspired by dragonflies. Source: Festo

Festo said it has been working intensively on bionics—the transfer of natural mechanisms and principles of action to technology—since the 1990s. The company said BionicOpter and BionicSwift are just two of the dozens of bionic robots it has developed.

“The flights of the BionicOpter and BionicSwift are thrilling and not to be missed,” said Festo.

RoboBoston is put on by MassRobotics, which claims to be “the world's largest robotics cluster” and “the largest collaborative robotics center.” The Boston-based organization supports the robotics ecosystem in Massachusetts and beyond with co-working space, networking events, and more. Tomorrow's Robot Block Party is free and open to the public, rain or shine.

Festo
Festo's BionicSwifts are designed to be more agile than helicopters or other types of drones.

Three Ways Solar Energy and Robots Have Converged
Robots are being used for a variety of tasks linked to solar power as the world increasingly turns to the...