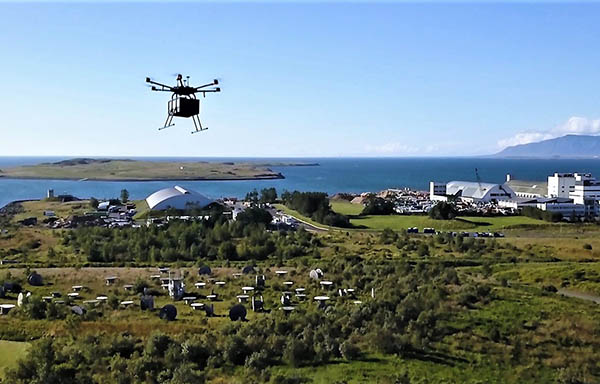 Flytrex Inc. today released its 2021 Yardstick report, in which it analyzed consumer trends from its drone-delivery service across North Carolina. The Tel Aviv, Israel-based company claimed that it has completed more business-to-consumer deliveries by drone than any other company in the U.S.

“Drone delivery has skyrocketed over the past year,” said Yariv Bash, co-founder and CEO Flytrex. “The exponential growth of orders from the Flytrex service has demonstrated that consumers are flying high over our ultrafast delivery.”

“Our goal has always been to provide the fastest, safest, and most affordable service to customers, and we’re thrilled to see just how delighted they are,” he added. “We can’t wait to bring this same level of airborne convenience, speed, and satisfaction to the rest of the U.S.”

In addition, Flytrex recently raised $40 million in Series C funding to expand across the U.S., and it received U.S. Federal Aviation Administration (FAA) approval to expand its service to 1 mi. and 10,000 households in North Carolina.

Since September 2020, Flytrex has been opeating in the “First in Flight” state, beginning in Fayetteville, N.C., and expanding to Raeford, N.C. The company said its 2021 Yardstick report is based on data from its delivery service.

Flytrex said it delivered more than 12,000 items by drone last year. The average transport time was three minutes, and the fastest delivery in 1:42 minutes, according to the startup.

On New Year's Eve, Flytrex said it received an order every 6.5 minutes and had up to three drones operating simultaneously in its service area. Since February 2021, the company reported that the volume of orders across its North Carolina operations had increased by more than 2,500%.

Flytrex also reported the following findings in its report: 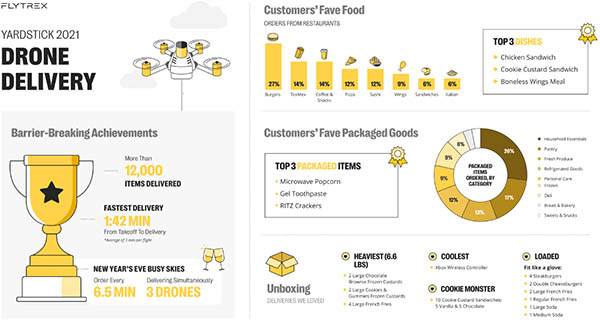 In 2017, Flytrex launched what it described “the world's first fully autonomous urban drone delivery system” in Reykjavik, Iceland. It has collaborated with the North Carolina Department of Transportation (NCDOT), as well as leading national restaurant and retail chains.

The company participated in the FAA's UAS Integration Pilot Program (IPP) and its successor, the BEYOND program. It is also currently working to receiving Part 135 certification and to expand its drone delivery service nationwide.

Flytrex said it is now looking westward to bring its service to residents in and around the Dallas area.