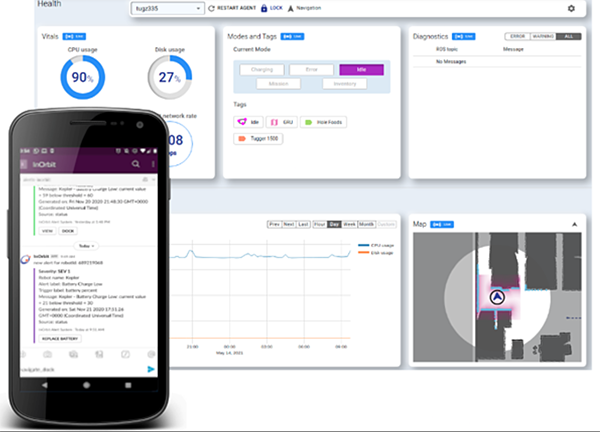 InOrbit
InOrbit is working with partners to make the management of robot operations easier.
By Eugene Demaitre
·

Until recently, developers and users had relatively few tools for scaling and managing their growing robot fleets. InOrbit has responded with its cloud-based robot operations or RobOps software. The company today announced the launch of its Developer Portal, its InOrbit Ecosystem of partners, and a collaboration with AI-based management platform provider 634AI.

“Our whole reason for existence is to accelerate adoption of robotics,” said Florian Pestoni, co-founder and CEO of InOrbit. “We want to bring the community together and offer tools for it to get cranking right away.”

“When you launch development tools— what's amazing for me is that you think people will use them in a certain way, but they go and create things you couldn't conceive of,” he told Robotics 24/7. “We want to empower developers to do more faster.”

The portal includes links to a growing number of open-source contributions, such as support for interoperability standards and sample integration for ChatOps. Robotics designers can use the Developer Portal with the recently announced InOrbit Free Edition to immediately begin building rather than start from scratch, said Pestoni.

“The portal goes hand in hand with our free platform,” he said. “Our mission is to be a catalyst for the adoption of robotics at a global scale. We see a lot of waste where people reinvent the wheel. It has the effect of slowing everyone down. We released the free edition to remove friction.”

“Developers love to have control and cherrypick tools,” Pestoni added. “They know what's best, whether it's a vendor developing software for a specific robot or perhaps a partner or end user that needs basic tools to integrate into enterprise systems.”

“A lot of our tools were already available, but this portal brings everything together in a one-stop shop,” he said. “The APIs and developer tools work out of the box with InOrbit Free Edition. If you need more advanced tools, such as Time Capsule, we also have APIs for the paid editions.”

The new InOrbit Ecosystem is a growing group of vendors with complementary products and services. Together with InOrbit, these suppliers can address various specialized needs across different verticals, said the company.

“InOrbit’s data platform can take care of common RobOps needs for most robots in the real world,” said Pestoni. “At the same time, we know that each robot and deployment is unique. Now developers and robot operators have access to the tools they need to connect their robots to the cloud—and to everything else.”

“Even better, we are enabling other companies to easily integrate with our platform to offer a range of solutions, including IoT [Internet of Things] sensor data, spatial intelligence, advanced video, and routing algorithms,” he added. “We're talking about partners with complementary offerings, building on top of InOrbit's APIs, or we're building on top of their stuff.” 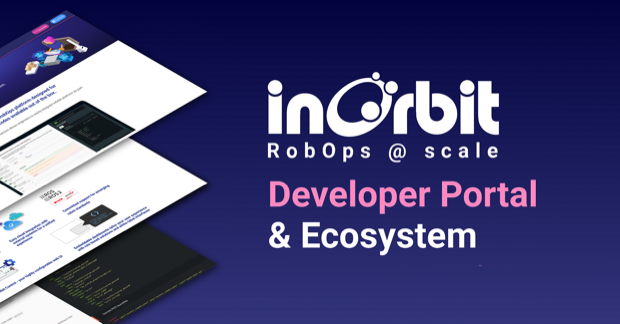 “For example, we've been working with Oualcomm for some time, and we can now say that their RB5 platform is part of our ecosystem, and we're part of theirs,” Pestoni said. “It's now optimized for robotics and artificial intelligence, and operations can connect through Wi-Fi 6 and 5G.”

“InOrbit has unparalleled ability to monitor the position and status of robots on the warehouse floor,” said David Pepper, CEO of Next Generation Robotics (NGR). “Combined with NGR’s cross-platform fleet orchestration software, customers will have all they need to get tasks done quickly and efficiently, no matter the number or type of robots in use.”

“Next Generation Robotics provides algorithms for routing tugs and cleaning robots, all in the same warehouse,” Pestoni said. “We can connect and control them, and now these robots need to know how to optimize routes second by second.”

“Just as public restrooms used to have clipboards with sheets to say when they were last cleaned; now, we can do that for every square foot of an airport,” he explained. “If you combine that rich data from the robot's operation with secondary data, people and robots can do smarter things.”

“We've worked with IoT companies in warehouses. In addition to autonomous mobile robots [AMRs], you have fixed sensors, cameras, and controllers for opening doors,” said Pestoni. “We have partners who can bring data from robots and fixed sensors and integrate them to let engineers focus on the things they're expert in.”

“We're like an air traffic controller. Each of the aircraft makers and airlines knows how to fly, but we help pull everything together,” he noted. “Orchestration goes beyond interoperability. With our Developer Portal and ecosystem, InOrbit can help both existing robot makers and the onslaught of new startups, as well as end users who have different robots for different tasks.” 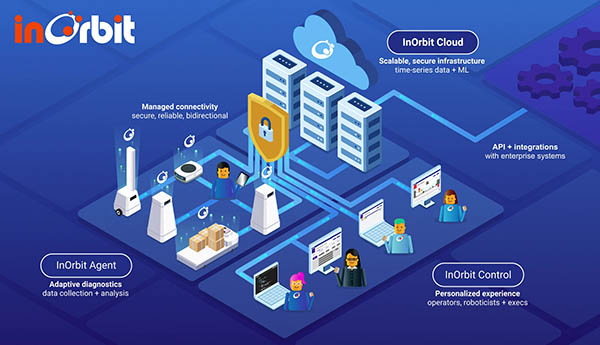 634AI and MAESTRO to collaborate with InOrbit

InOrbit today also announced that it is collaborating with 634AI, which has developed MAESTRO, an AI-enabled “control tower” for streamlining the management of industrial indoor mobility. The companies said their joint offering can give users a deeper understanding of the workflows on factory and warehouse floors, enabling easier integration and optimization of AMRs.

The partnership is the debut of Neve Ilan, Israel-based 634AI’s technology in the U.S. market. The company will provide access to AMR fleet data, such as vehicle type and battery charge level. 634AI said the collaboration supports its vision of providing a robot- and space-agnostic system for the holistic management of work floors.

“This collaboration is a significant step for companies to scale their robot fleets from hundreds to thousands through the use of RobOps best practices,” said InOrbit's Pestoni. “634AI provides us with a unique and highly valuable layer of data. We look forward to working together to help companies turn to automation. With a trustworthy RobOps platform, small-to-medium manufacturers can experience the many benefits of industrial automation and scale up their businesses.”

Pestoni said he could see orchestration becoming important for industries such as logistics, construction, hospitals, and grocery, as their fleets of robots also grow. “Bits don't care about pesky human borders, as we've seen with a lot of technologies,” he said. “We've now come full circle, with bits driving atoms or the use of software to control the physical world. The possibilities are endless.”

InOrbit is participating in the Association for Advancing Automation's (A3's) Autonomous Mobile Robots and Logistics Conference this week in Memphis.

InOrbit
InOrbit is working with partners to make the management of robot operations easier.

Automate 2022 Vendors Focus on Interoperability and Systems Integration
InOrbit Connect Certification Can Simplify the Scaling of Robot Operations
10 Finalists Named in Cowen Startup Challenge; Winner to Be Named at Automate
InOrbit Collaborates With Kärcher to Bring Robot Operations Best Practices to Autonomous Cleaning
How to Manage Your Autonomous Mobile Robot Return on Investment