Self-driving trucks from Kodiak Robotics will include modular, low-profile sensor suite for ease of installation, maintenance. 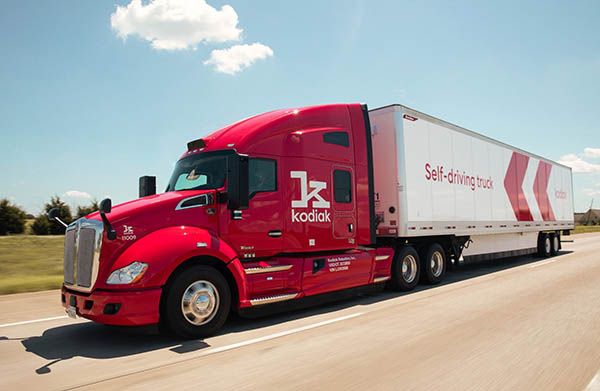 Kodiak Robotics Inc. last week announced its fourth-generation autonomous truck. The Mountain View, Calif.-based company said the self-driving vehicles will include modular sensor suites and will be more robust. Kodiak plans to begin putting more trucks on roads in the fourth quarter of 2021.

“Complex and bulky systems that require an engineer to hand-build and hand-tune are expensive, unreliable, and difficult to debug,” stated Don Burnette, co-founder and CEO of Kodiak Robotics. “We believe that reliability and scalability flow from simplicity, and the best hardware modifications should be barely visible. Our fourth-generation platform is designed for simple, scaled production, which means easy calibration, troubleshooting, and maintenance for our partners.”

Founded in 2018, Kodiak claimed that it “has developed the industry's most advanced technology stack purpose-built specifically for long-haul trucks.” The company said its vehicles are designed to make the freight industry safer and more efficient. It delivers freight daily for customers between Dallas-Fort Worth and Houston, operating autonomously on the highway portion of the route. In January, Kodiak announced “disengage-free” customer deliveries and released footage of over 1,000 miles of disengage-free driving.

Kodiak's fourth-generation truck has sensors in three locations—a “center pod” on the front roofline of the truck and pods integrated into each side mirror. It said its integrated and low-profile sensor placement will simplify installation and maintenance. The company added that the design is intended for greater fleet uptime, manufacturing, and serviceability, enabling it to scale quickly, safely, and efficiently.

The Kodiak Vision perception system considers every sensor—including lidar, cameras, and radar—primary, said the company. Kodiak Vision fuses data from the sensors and considers the relative strengths and weaknesses of each type. This incorporates extra redundancies and cross-validates data, adding another layer of safety to the self-driving system, Kodiak said.

In addition, the truck incorporates the ZF Full Range Radar and Luminar's long-range Iris lidar for performance and reliability. The company said these sensors, combined with its previously announced integration with Hesai Technnology Co. 360-degree scanning lidar for side- and rear-view detection, will provide automotive grade-reliability. All three sensors are purpose-built to meet the needs of autonomous trucks, which need to “see” long-range in a wide variety of weather conditions to safely operate at highway speeds, it said.

The ZF Full Range Radar provides four-dimensional (4D) capabilities, measuring the distance, height, lateral angle, and velocity of objects out to 300+ meters. This contrasts with traditional radar, which cannot measure the vertical position of an object, effectively viewing the world from the top and down like a map.

4D radar is critical for autonomous trucks because it allows the system to distinguish overhead objects—such as road signs and bridges—from road hazards like stopped vehicles under a bridge or an overhead sign, said Kodiak.

Luminar's new Iris lidar's wide horizontal and vertical field of view enables Kodiak trucks to recognize objects both near and far, adding further redundancy for long-range detections up to 600 m (1,968 ft.), according to the company.

The high resolution and range allows the system to reliably “see” objects such as pedestrians and motorcycles. The lidar's slim design has a profile of just 10 cm (3.9 in.), so it easily fits in the discreet center roof pod in the front of the truck, Kodiak said.

Kodiak Robotics' patent-pending mirror pods will start with one Hesai lidar, two long-range 4D radars, and three cameras. They don't require specialized sensor calibration, said the company. Rather than replace a sensor in need of maintenance, a mechanic can simply replace the mirror pod in a matter of minutes, Kodiak said.

Kodiak has placed an order for an additional 15 PACCAR trucks that will be delivered over the next year. The company said the new trucks will more than double its fleet size and help it expand its freight deliveries for commercial customers. Over the next couple years, Kodiak plans to expand throughout the southern half of the U.S. into other freight corridors.

Under the hood, Kodiak's fourth-generation trucks will be powered by Cummins X15 Series engines. They include the Cummins ADS Powertrain interface, a control interface designed to enable the autonomous system to safely, reliably, and securely communicate with the engine.

Kodiak trucks run exclusively on Bridgestone tires, and they will be equipped with Bridgestone cloud-connected sensors to capture critical tire-centric data. That data will be analyzed and processed into live actionable insights, increasing uptime, safety, and operational efficiency, said the company.

As NVIDIA DRIVE Orin becomes available, Kodia plans to use the supercomputing platform. With more than 250 TOPS (trillion operations per second) of compute performance, DRIVE Orin follows safety standards such as ISO 26262 ASIL-D. The system will provide the data and computing power to reliably make and implement decisions safely and securely, said Kodiak.

In the interim, Kodiak will use the current-generation NVIDIA DRIVE AGX Pegasus to process the data from the cameras, allowing the autonomous system to perceive the surrounding environment.

The company said it has demonstrated “significant momentum” so far this year. Kodiak announced a contract with the U.S. Air Force to develop autonomous airbase vehicles.

The global market for self-driving trucks will expand from $1 billion in 2020 to $1.6 trillion by 2025 at a compound annual growth rate (CAGR) of 10.4%, predicted Allied Market Research. It said that North America will account for the largest share of that market.

Kodiak also recently announced investments from BMW i Ventures and Bridgestone Americas, as well as a collaboration with Bridgestone regarding smart tire sensing technologies. The company said it “aims to build the world's most efficient, reliable, and respected end-to-end delivery solution” and it has begun driverless testing of its autonomous system.