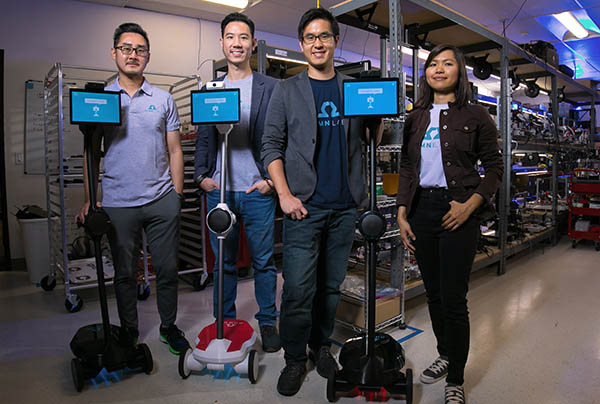 In June, the Eastern Kentucky Advanced Manufacturing Institute, or eKAMI, opened a new Robotics Center to offer hands-on retraining with robot arms and mobile robots used in industry. The Paintsville, Ky.-based institute was founded in 2017 and is dedicated to addressing the skills gap in U.S. manufacturing. Among the technologies at the event was an Ohmni telepresence robot from OhmniLabs Inc.

“One area with a huge increase in demand was manufacturing,” he told Robotics 24/7. “Especially with restrictions on travel and normal business operations, our robots can help people deal with these challenges.”

Founded in 2015, the company provides telepresence robots that it said are modular, affordable, and can help with remote training. OhmniLabs also provides Ohmni Cloud Solutions for cloud-based fleet management.

“When we started, we wanted to build robots for social settings,” recalled Vu. “We designed robots to allow people to provide services or to augment their capabilities. Telepresence is only the beginning.”

“We took an interesting approach—using a modular platform, we enable our customers to customize everything from the robot's base to its brain to meet their requirements and workflow needs,” he said. “In some cases, the robots integrate with additional hardware. For example, hospitals can pair them with wearable devices to measure vital signs.”

“In other cases, we develop a robot from the ground up,” Vu said. “The 'Newme' avatar robots gave out high school diplomas.”

In addition to events, what are other top users of OhmniLabs telepresence robots? “Healthcare, education, and manufacturing,” replied Vu. “Especially with COVID-19, robots can connect patients in quarantine with their families and doctors. We also integrate with Zoom to provide remote IT support on demand for hospitals.”

“In education, robots can provide inclusion for students with compromised immunity from cancer or other serious illness,” he said. “We've deployed a large fleet of robots in Australia and New Zealand so students can go to classes.

“Volkswagen rcently announced a new outdoor telepresence robot with us to provide accessibility for soccer fans,” Vu added. “Other companies use Ohmni robots for inspection on the factory floor. A client can check in with monitoring and auditing functions on.”

“We can work alongside customers to see if they need extra sensors or components, such as to measure the gap between spaces in inspection,” he said. “We can overlay that information on top of the user interface.”

Ohmni Labs offers its systems in a robotics-as-a-service (RaaS) model, but that may not be for everybody. “Some people are already familiar, but it depends on the customer,” Vu said. “Some prefer to buy the robots upfront, which is easier at our price point of under $3,000.”

Telepresence and other next-gen technologies

In production applications, it's still early days for mobile manipulation, acknowledged Vu. “We have a 3D-printed, ultralightweight prototype of robotic arms,” he said. “Our strategy has been to identify clear use cases and partners to go to market and demonstrate the value of the technology. We're not developing technology for its own sake.”

“We have some overlaying information, but no true VR or AR [virtual reality or augmented reality] yet,” he noted. “It's mostly for controlling the arm.”

“We do have APIs [application programming interfaces] so that people can integrate different types of controllers or customize the interface to overlay different information,” Vu said. “They can customize it for a corporate look and feel.”

“In Finland, a telecommunications provider has integrated our robots with 5G networks,” he said. “We're making good progress on the AMR [autonomous mobile robot] platform, and we're looking forward to the cost of depth-sensing cameras going down.”

“In the latter half of this year, we'll be launching a UV disinfection robot,” said Vu. “OhmniClean will have a smaller footprint, shorter charging times, and higher utilization, plus testing and reporting functions.”

“Sometimes, full autonomy is complex to set up, and we have a semi-autonomous feature that allows people to easily specify a route for a robot to follow,” he explained. “We recently did a demonstration at a hospital, where we did a risk assessment. With our 'push to map' technology, a push of a button sent the robot to follow a pre-defined route in a room, and it knew how long to spend in each spot.” 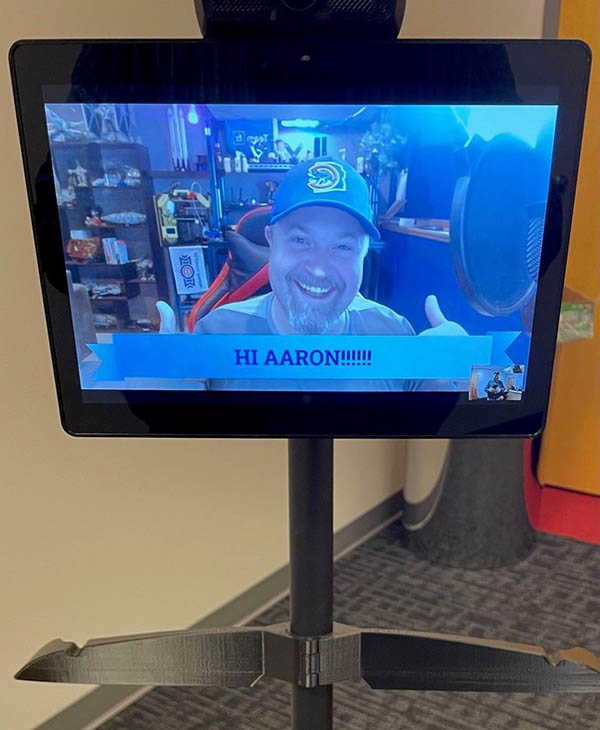 Jake Hall was able to attend eKAMI Robotics Center opening remotely with the Ohmni. Aaron Prather, senior technical advisor at FedEx, guided Jake through the 40,000-sq.-ft. facility, and he was able to interact with other attendees.

“For this use case, we worked with eKAMI to help provide remote training and support for their efforts to reskill workers with robots,” Vu said. “Right now, they're using an off-the-shelf robot.

Ohmni can also help with work-from-home situations, according to OhmniLabs. It can scale from a single robot to multiple robots, with staff support.

“Our largest fleet was 100 robots [provided with TelcoDR] for the Mobile World Congress in Barcelona—it was the first time this large a fleet of telepresence robots was at such an event,” said Vu. “We've scaled 3x capacity in 2020, and we're actively looking for hardware engineers.”