PFF has been modeling human behavior to enable its autonomous mobile robots that can follow pedestrians. 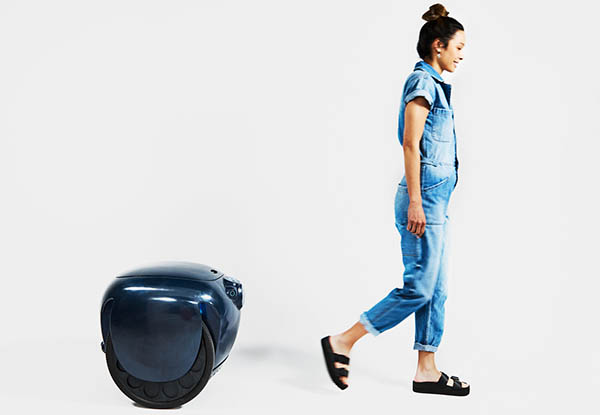 Piaggio Fast Forward
Piaggio has been granted a new U.S. patent for its pedestrian-following robot technology.
By Robotics 24/7 Staff
·

Mobile robots for deliveries are increasingly common, but intellectual property protections demonstrate the need for differentiation. Piaggio Fast Forward Inc. today announced that the U.S. Patent and Trademark Office has awarded it Patent No. 11,112,807 for a “Method for Determining Self-Driving Vehicle Behavior Models.” The Boston-based company said that its latest patent focuses on the proprietary design of robot behavior specifications.

“The knowledge of understanding how people move is the foundation of our mission,” said Mitchell Weiss, chief technology officer at Piaggio Fast Forward (PFF). “Piaggio Fast Forward's approach is to understand pedestrian etiquette and design machines that share this understanding. We continuously work to better innovate in order to provide the leadership for the complex interactions between humans and machines moving together in pedestrian environments.”

Piaggio Group, the Italian manufacturer of the Vespa scooter, founded Piaggio Fast Forward in 2015. PFF is developing self-driving machine software and hardware for use in dynamic and unmapped built environments.

The company said it combines knowledge of the outdoor and indoor built environments with a unique library of behaviors designed through millimeter-accurate observation of how people move, such as exiting buildings with one another and beyond. PFF holds 44 patents ranging from wheel and robot designs to behavior models. The company said its goal is to provide more economically and environmentally sustainable mobility.

Piaggio Fast Forward said its technology and design teams developed and co-authored the new patent. The company has started its pedestrian mobility efforts with the development of two-wheeled, non-autonomous products. PFF added that some of its developments will create autonomous behaviors that complement the non-autonomous robot/device/vehicle.

To accomplish this, PFF has observed people, analyzed data, and designed behaviors for following robots interacting with leaders and bystanders for a seamless experience between humans and robots.

The company said its following technology pairs with a person by reliably detecting people. Its robots can follow them indoors and outdoors with a fused sensor array using RGB and stereo depth mapping cameras and 4D radar.

In 2019, Piaggio Fast Forward debuted gita, a two-wheeled cargo-carrying robot designed to follow a pedestrian safely. The robot uses machine vision to follow its leader. It can match human behaviors like walking speed, maneuverability, and travel distances, with all interactions such as pairing, following, unpairing and parking being done with the touch of a button.

Because most of the built environment is constantly changing and is unmapped, PFF said it has focused on such spaces. It currently has robots following human leaders across the U.S. without the need for telepresence joystick operation.

In addition, Piaggio recently announced a sensor package developed for consumer and business robots as well as motorcycles and scooters.

Piaggio Fast Forward
Piaggio has been granted a new U.S. patent for its pedestrian-following robot technology.