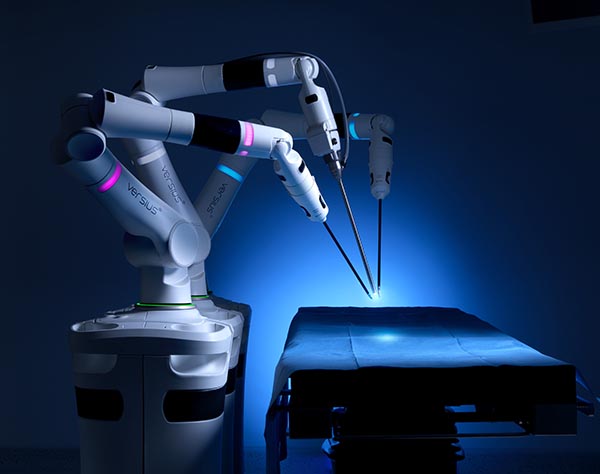 Surgical robots are starting to play a key role in the medical space and are helping increase positive outcomes for both doctors and patients.

The promise is that these robots will work alongside surgeons to move from manual laparoscopy to more efficient approaches—expanding the number of patients who can have minimally invasive surgery.

Robotic systems are now being used for gynecological, colorectal, thoracic, and urological procedures.

By increasing their use of surgical robots, hospitals can eliminate obstacles and patients enjoy a higher level of care, according to several medical robotics experts Robotics 24/7 interviewed for this story.

“Previously, cases that were too complex to perform via manual laparoscopy would have to be performed via open surgery, which is associated with longer recovery times, more pain, and increased likelihood of return to surgery,” he added.

Surgeons also appreciate the robot systems because they reduce the strain on their backs during procedures, according to Slack.

“Laparoscopic surgery is physically and mentally demanding, causing three in four surgeons to experience back pain,” Slack said. “A study found that nearly 20% of surgeons would consider retiring early as a result of the physical impact of performing MAS, resulting in surgeons spending reduced time at peak performance before retiring, or retiring before they reach peak performance. Versius helps surgeons to operate ergonomically, with the potential of prolonging careers.”

“Furthermore, surgical robots currently in development can solve the challenge of robotically controlled laparoscopic instruments by leveraging actuators that decouple the motion of the robot’s joints, enabling the instruments to mimic the movements of the human body while inside the abdominal cavity,” said Greene.

One example of surgical robots raising the level of patient care can be seen in the collaboration of CMR Surgical and Milton Keynes University Hospital (MKUH), which is 50 miles northwest of London.

The hospital estimated that it could benefit by increasing the number of minimally invasive surgeries performed with robots.

The hospital built the pilot program around CMR’s Versius, a small, modular, mobile robotic system consisting of three independent arms. The robotic arms are designed to replicate or mimic those of a human in size and shape. The surgeon controls the arms using a high-definition, 3D visualization console and a handset that resembles a video game controller.

According to Nidhi Singh, a consultant in obstetrics and gynecology at MKUH, patients experienced faster recoveries and shorter hospital stays than they would have with an open-incision procedure. By reducing the patients’ stay, the hospital significantly increased bed availability.

In addition, patients experienced less post-operative pain, complications, and scarring, and the hospital was able to reduce opioid use and hastened patients’ return to normal activities.

Singh contended that the use of surgical robots like Versius will help surgeons avoid wrist and shoulder issues that seem to result from manual surgical techniques. Singh also said robots could surgeons extend their careers.

Surgical robots to get smarter

The next stage in the evolution of surgical robotics is the adaptation of artificial intelligence in the operating room.

One of the early providers of robots that leverage AI technology, Asensus Surgical, advocates an alternative conceptualization of AI called augmented intelligence, which focuses on AI's assistive role.

The company argues that augmented intelligence will transform how surgery will be performed.

“Surgical procedures previously relied on the surgeon’s experience, but performance can be more consistent from patient to patient, yielding improved outcomes,” said Anthony Fernando, president and CEO of Asensus Surgical. “Augmented intelligence has the power to democratize surgery and level the playing field for surgeons.”

“Digital technology provides an ability to ‘learn’ in real-time from the field of surgeons’ skills,” he concluded. “Augmented intelligence enables a robotic-assisted platform to perceive via computer vision, learn through machine learning, and assist in surgery via clinical intelligence, providing a true digital surgical assistant for the first time.”