More than 5,000 mowers have already been reserved. 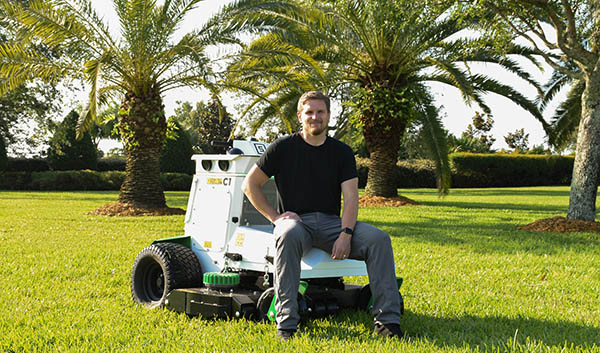 Jack Morrison, Davis Foster, and Isaac Roberts are trying their hand at disrupting the landscape industry with the M.52, their autonomous lawn mower.

Together, the trio make up the leadership team of Scythe Robotics, a Boulder, Colo.-based automation company they founded in 2018.

Morrison was inspired to make the M. 52 while mowing his lawn one day.

“It sort of clicked for me,” he said. “’Why am I still doing this? Why are people still doing this? This seems like a perfect application for autonomy. It’s dull. It’s dirty. It’s occasionally actually surprisingly dangerous.'”

Like many other industries, the landscaping space is also seeing a dearth of new workers.

“We called up a bunch of landscapers and heard the same thing, which was ‘I can’t find enough people to get my work done. I have all these contracts, but I don’t have enough people to satisfy them,’” Morrison said. “Secondly, a lot of them asked, ‘Do you have autonomous mower right now? I really need a robot mower.’”

He was already having conversations with Foster about starting an automation company. Morrison met Foster when they both worked at Occipital. He saw firsthand the young man’s talent as an electrical engineer working with 3D perception technology. Morrison previously worked with Roberts at a 3D scanning company they founded together.

Scythe Robotics largely relies on computer vision technology for M.52, said Morrison. The mower has 3D mapping, onboard semantic segmentation, onboard visual simultaneous localization and mapping (SLAM), and terrain-aware motion planning. It also has 8 HDR cameras and a host of sensors.

It’s designed for large landscape commercial contractors who make anywhere from $1 million to $100s of millions in annual revenue.

The company isn’t selling the mower as a standalone. Instead, it charges by acreage mowed.

Scythe has been testing the M.52 in three states: Colorado, Texas, and Florida.

“We’ve been going out and mowing for landscaping contractors for years and testing in real-world environments,” Morrison said. “And we’ve been mowing with customers out in the field.”

The company tested in those three states for a few reasons. With Colorado being home base, it made sense to test there.

But Florida is where it started testing first two and a half years ago. That’s because every landscaper Scythe spoke with told it the same thing: “If you can mow in Florida, you can mow anywhere.”

“Florida’s just got the thickest, wettest, sort of squishy grass in the country,” Morrison said. “They mow year-round. It’s hot, humid. The environment just heats up the machine more than anywhere else.”

Scythe only recently moved to Texas because it’s another state that mows years round and there are a number of big landscaping companies there, Morrison said.

Scythe catches up on order backlog

More than 5,000 mowers have been reserved for purchase.

Morrison said Scythe has already started delivering on those reservations. The company delivered M.52s to Austin, Texas-based Clean Scapes. He added its working on getting machines to the company’s other early reservation partners this year.

He said it “will be a few years” before it completely fills the backlog of orders, though.

“This year and next, we will be deploying primarily in Texas and Florida to start ramping up,” he said. “Beyond 2023, we’ll start looking broader across the country and start rolling out in new regions.”

My Goat Educates the Lawn Care Industry on the Benefits of Robots
My Goat is taking the approach of multiple, smaller robots for quieter, emissions-free lawn mowing rather than periodic passes with...
More Mowing