MRO Academic Insights: Getting up to speed in Alabama

In northern Alabama, the Alabama Robotics Technology Park is training nearly 1,000 automation operators and technicians each year for local manufacturers. It's one of the reasons Alabama is attracting so much manufacturing and distribution activity. 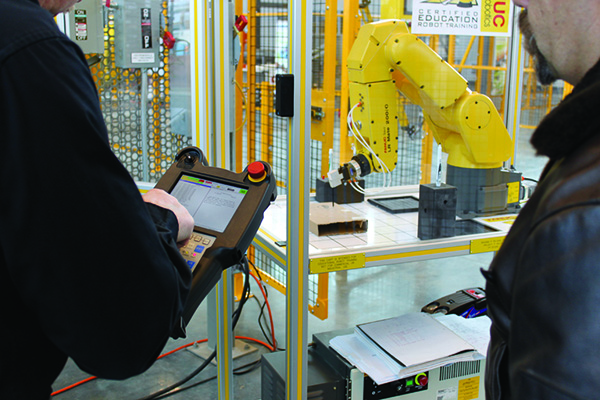 Sure, it’s a cliché, but sometimes necessity really is the mother of invention. Or, at least, that’s how the Alabama Robotics Technology Park came about a few years ago in Decatur, Ala., according to Brooks Kracke, president and CEO of the North Alabama Industrial Development Association, and Rick Maroney, director of the technology park.

As the two tell it, a former governor was talking to a senior executive from a local manufacturing company that had been thinking of expanding his operations. At the time of the conversation, the executive was perturbed because his assembly line was down.

“Why don’t you get your maintenance guy to fix it?” the governor asked.

“I would but he quit, and we can’t find anyone else who knows how to fix it,” the executive complained, adding, “You promised me a trained workforce.”

Responding to necessity, the governor drew out on a napkin his idea for a robotics training center and sent it over to Maroney’s boss. The Alabama Robotics Technology Park opened for business in 2010.

And, there’s plenty of business. Northern Alabama has become a hot bed of manufacturing activity, home to established plants from Mercedes-Benz, Honda and Hyundai and a new Mazda Toyota plant that will need 4,000 employees when it is operating at full speed. In the northeastern part of the state, there’s distribution, with large Walmart, Target and Children’s Place distribution centers. All of these facilities will need trained maintenance technicians.

“The No. 1 issue before people locate here is: Where are my employees going to come from,” says Kracke. It’s not just a concern for today. “Our auto manufacturers view this as a 50-year lifecycle and they want to know they’re going to have employees over that 50-year period,” he says.

About 50% of the equipment in the technology center is owned by the vendors whose systems are used by area manufacturers, and they rotate that out as new equipment comes on line.

That has been part of the job of the North Alabama Industrial Development Association since it was founded in 1949 to create jobs in that part of the state. Increasingly, developing the skills needed on the job is one of the keys to industrial development. Years ago, most potential employees in all likelihood honed their mechanical and technical skills at home, fixing farm equipment, working on a car in the garage or studying industrial arts in high school. They came to the factory with a baseline knowledge of how things worked. “Today’s kids don’t tinker anymore, and that’s a major issue,” Kracke notes.

The technology park fills part of that gap. It was built out in three phases. Phase one, opened in a 60,000-square-foot facility in 2010, was focused on the maintenance and operations of the robotics equipment found in a modern manufacturing plant. The facility also offers training in materials handling, welding, PLCs and controls, and safety. Phase two, opened in a separate 43,000-square-foot space in 2012, provides space for companies researching and developing autonomous vehicles. Then, a 52,000-square-foot facility opened in 2016 to provide space for startup incubation, and it also houses a training space for manual and automated paint systems used in manufacturing. It is also used by companies to install a new line to train associates before the line goes live in the plant.

About 50% of the equipment in the technology center is owned by the vendors whose systems are used by area manufacturers, and they rotate that out as new equipment comes on line. “According to our vendors, our facility is the only one like it in the world,”
says Maroney.

For the most part, training is free to trainees and their employers. There are two ways to get into one of the training programs: The first is to be an employee of a company operating in Alabama; the second is to be enrolled at the University of Northern Alabama or Athens State University, the two educational institutions currently collaborating with the center. When there is available space, trainees from out of state can enroll in one of the programs for a fee.

Students can take basic, intermediate or advanced training. Courses of study include a mechanical class to learn how to tear down a robot, an electrical class to learn troubleshooting, a PLC class and a class on vision systems. Classes are OEM specific. “If your plant uses a Fanuc robot, your training will be on a Fanuc robot,” says Maroney. “If you use ABB, you’ll get an ABB curriculum or a curriculum for Cognex vision systems.”

Trainees leave with a 40-hour certification from RTP and a 32-hour certification from the OEM whose equipment they trained on. Safety classes, such as a focus on OSHA regulations or lift truck or overhead crane safety, are one to two days, depending on the subject matter. “We make sure that when a person gets a certification from us, they know what they’re doing when they go back to work,” Maroney says. In all, the center trains about 900 individuals a year.

In the future, the center will become the southern training facility for Fanuc and ABB robotic paint lines. “OEMs are struggling to find people who are qualified to run operate their systems, and its experience that gives you that application skill set,” says Kracke. “From our point of view, what we do at the technology center is one of the main incentives for companies to locate in the state of Alabama. Most of the prospect meetings for new companies considering Alabama are held at the RTP so we can showcase how we train talent.”

Bob TrebilcockBob Trebilcock is the editorial director for Modern Materials Handling and an editorial advisor to Supply Chain Management Review. He has covered materials handling, technology, logistics, and supply chain topics for nearly 30 years. He is a graduate of Bowling Green State University. He lives in Chicago and can be reached at 603-357-0484. Follow Robotics 24/7 on Facebook

Bob TrebilcockBob Trebilcock is the editorial director for Modern Materials Handling and an editorial advisor to Supply Chain Management Review. He has covered materials handling, technology, logistics, and supply chain topics for nearly 30 years. He is a graduate of Bowling Green State University. He lives in Chicago and can be reached at 603-357-0484. Follow Robotics 24/7 on Facebook

Maintenance Repair and Operation Technician Spotlight: Nikolai Ouchakov, OPEX Corp.
The Modern MRO team sat down with an automated storage and robotic sorting technician to give you an idea of...

MRO Academic Insights: Getting up to speed in Alabama
In northern Alabama, the Alabama Robotics Technology Park is training nearly 1,000 automation operators and technicians each year for local manufacturers....
Upcoming FIRST championship showcases young future leaders in automation
Following months of regional qualifying competitions involving K-12 students across 39 countries, 20,000 students expected to attend.
Yaskawa: Robotics education is a strategy for the economy
Technology and education intended to fill the gap between what the industry wants and what educational institutions can provide.
Schneider Packaging Equipment opens training lab for customers
Lab replicates real-world applications and will help troubleshoot without slowing or stopping production lines.
More MRO